Vicky Kaushal has looked and played the average guy on screen quite often and the pair looks good together.

The makers of the final story in the Bombay Talkies (2013) sequel have released the look of actors Vicky Kaushal and Kiara Advani who play the leads in Lust Stories, which will be directed by Karan Johar.

In December 2017, we had reported that Lust Stories had gone on the floors. The theme of the sequel is love and lust. Lust Stories will be released on the digital streaming platform, Netflix. 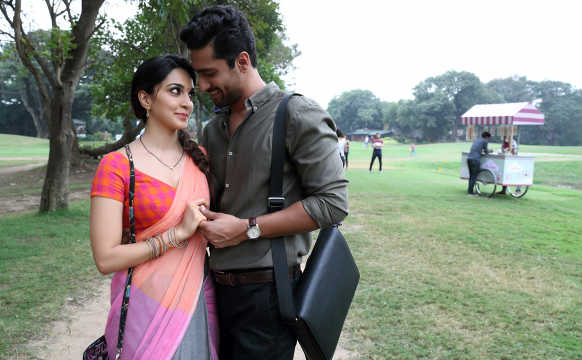 Advani will be seen in a non-glamourous avatar, which is unlike her looks in films so far. In Lust Stories, she will sport a saree in which she looks graceful. The intimacy between couple is reflected in the two pictures.

Kaushal has looked and played the average guy on screen quite often and the pair looks good together.

The other stories in the anthology will be directed by Zoya Akhtar, Dibakar Banerjee and Anurag Kashyap.

Akhtar’s segment is said to feature Bhumi Pednekar, Neil Bhoopalam and Rasika Dugal, while Banerjee’s film will have Manisha Koirala and Sanjay Kapoor. Radhika Apte has shot for the short film to be directed by Kashyap.