Would have been walking sheep and lambs if I hadn't done Tingya: Actor Sharad Goyekar


As Mangesh Hadawale's Marathi film Tingya completes 10 years today (18 April), Goyekar shared how the film changed his life from being a shepherd to an actor and businessman.

Sharad Goyekar was just another 11-year-old kid from the family of shepherds in the Rajuri village of Maharashtra. One day, out of the blue, he was offered a role in Mangesh Hadawale's Marathi film Tingya and his life changed.

The film not only won critical acclaim, but also went onto become a big hit at the box office. If that’s not all, Goyekar also won the prestigious National Award for Best Child Artist.

Tingya completes 10 years today (it was released on 18 April 2008). Today, a grown-up Goyekar is not only a full time actor, but is also a director and an entrepreneur. In an exclusive interview with Cinestaan.com, he speaks of his fascinating journey from a village to the film industry.

Goyekar is one of those rare artistes who had not watched any film before entering the film industry. “I am from a small village and my parents are shepherds. So, I had never even seen a movie in my life and there was no question of having a TV at our place. I had never even taken a photo of myself,” he says.

Director Hadawale, who is also from Rajuri, came to the village looking for a boy to play the lead in his directorial debut. “I was a student in the zilla parishad school then. The director, Mangesh Hadawale, is also from our village. While he was searching for a boy for the role, the villagers told him about me. He called me to his shop in the village and took my pictures. He said he is making a film and [asked] would I be a part of it,” Goyekar recalls. 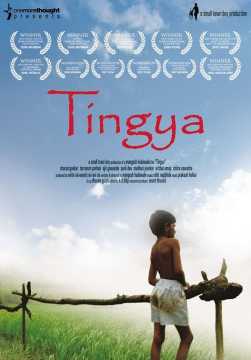 His performance in the audition encouraged the director to audition more kids in the village. “When he took my audition the next time on camera, he thought that if I am doing it so well, there must be more talented kids in the entire zilla and taluka,” says Goyekar, adding, “So, he took auditions of 1,230 kids and still chose me for the role.”

Although Goyekar had a performance oriented role, his training and preparation only included spending time with another important character in the film — the bull. “The only training I was given was that I had to be friendly with the bull. As I was from the community of shepherds, I was only used to handling lambs. I was scared of being with bulls. Hence, I and Sunil Deo, who played my father, were made to spend time with the bull for about a month and a half. We used to take it around the village,” he recalls.

When the shoot began, to everyone's surprise, the boy could perform his parts with ease. “It wasn’t challenging. I just kept on doing as I was told. He [Hadawale] used to give me the dialogues in part. As I was new, I couldn’t remember all of it at once. I didn’t know a lot of things then, which I know now. Vitthal [Shahir Vitthal Umap], who played the grandfather, also kept guiding me. Even right now the kind of work I am doing comes naturally to me. Fear and hesitancy are not a part of me,” he says.

Coming from the family of shepherds, Goyekar could not believe the turn his life was taking. “I had no idea about the outside world and didn’t know what a film is. All this happened out of the blue. So, it was a different experience as I was small. I used to feel happy as I travelled daily by bicycle. A boy used to eating bhaakar and chutney was eating hi-fi food on the sets. These things appeared special to me,” he adds with a smile.

Tingya also gave the young boy an opportunity to see the world that lies outside his village. “I was there when the film was shown in Pune for the first time. That was my first visit to any city. We had shot the film at a place which is just 10-20 kilometres from our village,” says Goyekar.

The film demanded his character to cry quite often. When asked how he managed it as a boy, Goyekar reveals that most of the sobbing was real, “Initially, they used to put glycerine in my eyes, but that used to trouble me a lot. Later on tears used to come naturally as I used to get deeply involved in the scene.”

Goyekar remembers a funny moment from the shoot where the lady playing his mother in the film improvised by mentioning his skinny physique. “There is a scene when the bull is ill and my parents are washing it. I was having food. The mother says, ‘You just eat. Don’t pay attention here.’ But she also added, ‘Your bones are showing.’ This dialogue wasn’t in the script. She added on the spot as I was very thin then,” he laughs.

The young protege has come a long way since Tingya, despite some hiccups. He runs a business of kitchen trolley furniture and recently opened a restaurant in Sangli. More importantly, he is making his directorial debut with a film titled Babya. “I am the co-producer along with friend and forest officer Sanjay Raut, director and main lead in the film. I might be one of the youngest persons to direct a feature film,” the 21-year-old informs.

Goyekar has also acted in a film called Maza Prema and will start shooting his next, titled Vani Vangdevanchi, from 15 May. He is simultaneously studying for a diploma in mechanical engineering.

When asked how he managed to direct a film without any prior experience, he says, “The film shows the life of people from the shepherd community. I have shown their entire life in detail. I come from the same society and have experienced everything, so I thought I can do justice to it. That’s why it wasn’t that difficult. Even a highly educated director won’t know the things I know. My parents supported me a lot. The animals used in the film are my own.”

Looking back at his journey, Goyekar feels his life wouldn’t have been what it is right now if he hadn’t done Tingya. “The film changed my life. If I hadn’t done that film, I would have been walking behind sheep and lamb today,” he concludes before signing off.