Aamir Khan: Shakti Kumaarr has all the bad qualities that you’d find in a person

Aamir Khan usually leaves no stone unturned to get into the skin of the characters he plays. After seeing him age and grey while playing a 50-plus father in Dangal, Khan has shocked us with a complete different portrayal in his next, Secret Superstar. The 52-year-old plays a funky, little cheesy struggling music director and reality show judge in Secret Superstar.

Khan unveiled a surprise by announcing Secret Superstar last year and the trailer left us amused with Khan's cool, funky look, in gaudy clothes. The makers today unveiled a behind-the-scene video of what it took to make the Shakti Kumaarr.

“Seeing him like this was a big jump for me mentally,” said Zaira Wasim, who plays the protagonist Insiya in the film.

Costume designer Priyanjali Lahiri speaks about Shakti's state of mind when it comes to dressing, “He thinks that he is looking cool but that’s not the case,” said Lahiri.

Cinematographer Anil Mehta found it to be a rangeela (colorful) character.

Khan’s reel daughter in Dangal, Sanya Malhotra, who has worked as a choreographer in Secret Superstar, had a damning assessment of Khan’s character.

Costume designer Avan Contractor too is amused by the bitter-sweet character, “He will definitely make you laugh, probably piss you off and even make you cry. It’s something that he (Khan) hasn’t done before. I think it is a very colorful character. We had a great time designing this look for him.”

“He is a music director who is going through tough times. You don;t get to write such characters regularly,” says Rao.

What does Khan have to say about Shakti Kumaarr? 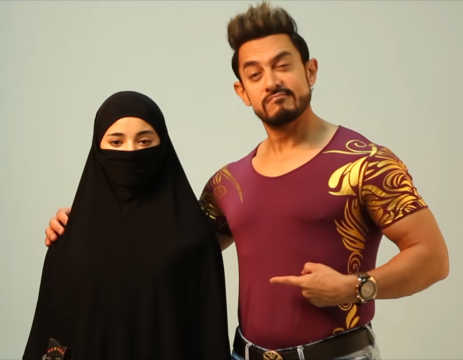 “He's a big flirt.. Whatever bad qualities that you can find in a human being, you will find that in Shaktii Kumaarr,” said Khan.

Here’s what director Advait Chandan has to say, “In his personal life, he is very simple, basic and organic. So for him to wear this tight T-Shirt, I think even he had a good time.”

Secret Superstar is set to be released on 19 October.

Watch the making of the colourful Shakti Kumaarr below.