Zaira Wasim: It was difficult to act in Secret Superstar because of Aamir sir’s get-up


The actress, who played the younger version of Geeta Phogat in Dangal (2016), speaks about her equation with Aamir Khan, how life changed after Dangal, and the effect of trolling on her earlier this year.

Teenage artiste Zaira Wasim was impressive in Nitesh Tiwari’s Dangal (2016) despite the fact that she did not have a lengthy role. She played the younger version of Aamir Khan’s on-screen daughter, Geeta Phogat. But she has a full-fledged role in debutant Advait Chandan’s Secret Superstar, which is produced by Khan.

In an interaction with Cinestaan.com, Zaira Wasim answered questions related to the film, her equation with Aamir Khan, Advait Chandan's efforts to have her dropped from Dangal, and the effect of trolling on her earlier this year. Excerpts:

How has the journey been from Dangal to Secret Superstar?

I feel I am very lucky and blessed that I got to work with the same crew, Aamir sir and everyone else. Also that I got to work on two wonderful scripts that carry such powerful and important messages. We reached a point where I thought I am working with my friends.

Were you cast in Secret Superstar during Dangal?

How challenging was the character in Secret Superstar?

The role was challenging because I couldn’t connect to the character. I come from a family that is very loving and supportive of whatever I wish to do. The father in the film is absolutely the opposite to the father I have in my life. He is very loving. But my father in the film is absolutely hostile. He has all those patriarchal thoughts. For me, that was a little challenging.

Advait Chandan said he tried to persuade you to quit Dangal and start working on Secret Superstar.

Yes, right (laughs). He tried very hard to convince me. But of course he knew that it won’t be possible because my priority at that time was Dangal. I was committed to that film.

Did you always want to become an actor?

No, I never wanted to become an actor. In fact, I haven’t seen a lot of films. I am still the kind of person who is not a movie freak; who would put in an effort to go and watch films in theatres or whatever.

There were reports that your father opposed your profession of acting.

No, never. He has always been very supportive. I come from a family where the girl child is a lot pampered; more than boys actually.

How and when did you first meet Aamir Khan?

It happened through my school. I have always been a very shy kid. I would not interact with a lot of people whom I wouldn’t know. I could not talk in front of many people. I always used to get startled in front of the huge crowd. But there was a time when a play was being held in our school. It was a drama based on female foeticide. I took part in the play as a protagonist. I was playing the unborn foetus and it turned out to be very good. That is when my principal sort of discovered that this girl can act.

A casting director from Mukesh Chhabra’s office was in Kashmir. He was looking for a girl in a film and he also happened to visit our school in that period. That is how my principal gave my name and I shot a couple of ads. Then I got shortlisted for the film [Dangal].

You have done two films with Aamir Khan. What is your rapport with him? Is he a fatherly figure or a friend?

Both, actually. He has now become like family. So, he is just one call away if I need advice or want to talk to him.

Will you continue to consult him in the future if you are offered other films?

Yes, if I feel like talking to him, I will.

What brief did he give you for this film?

For the film and the acting part, it was the director’s call. But the only brief he gave me before we started shooting Secret Superstar was that I have to make sure that I look like I am actually playing the guitar and I look like I am singing. So, I made sure I learnt the guitar as much as I could.

Aamir Khan played a caring father in Dangal. Here he plays an unusual, creepy character. What was your reaction when you saw him for the first time in the Secret Superstar getup?

I was shocked and I was in stitches. Even when I was shooting with him, it was so difficult for me to act because I would start laughing every time he spoke. And he looks so creepy. He has a weird accent. He is wearing tacky clothes with weird jewellery. But it was fun overall. It was a new experience. 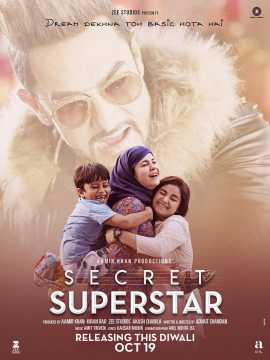 What are you studying currently? How do you manage studies while shooting?

I am studying in the eleventh. I am doing Arts. While I was shooting for Secret Superstar, all credit for my management goes to the production, Aamir sir and Kiran [Rao] ma'am. I was then in the tenth grade. You know it’s boards and a huge thing. I was initially happy that I will be missing school. But later it struck me that arre, fail ho gaye toh ghar se nikal denge [I might be thrown out of the house if I fail]. But Kiran ma'am came to my school and spoke to my principal.

How did your life change in school after Dangal?

My life is pretty similar to what it was before Dangal. People think my life has become upside down, but it’s the same actually. My friends still tease me the way they used to.

So you are not special for them?

What about the public? Do they recognize you?

Yes. But I would also tell you that they also have a hard time to recognize me. I have literally seen people standing in front of me and arguing like, “Is she? Or isn’t she?” It happens right in front of my face and I don’t know how to react. Like, should I tell them or just go away?

You were trolled earlier in the year for meeting the chief minister of Jammu & Kashmir. How did you cope with it?

Have you now decided to pursue acting as a career?

I don’t know. I have not made up my mind. I am still waiting for things to come to me. Let’s see.

Any other films that you have in the bag? Are you getting any offers?