It is unfair the way Mahira is being judged: Ranbir Kapoor speaks out


The Jagga Jasoos (2017) actor issued a statement condemning the criticism of the Pakistani actress after the duo were spotted smoking in New York.

Ranbir Kapoor is usually not one to speak about his private life, but the actor has been forced to issue a statement in the wake of his rumoured affair with Pakistani actress Mahira Khan.

The duo was recently spotted taking a smoke break in New York. Kapoor was shooting for Rajkumar Hirani's Dutt biopic, while Mahira Khan was in the city for a shoot as well.

Social media trolls slammed the actress for smoking in public and also her attire. The picture added fuel to the fire of Kapoor and Khan being a couple. Taken aback by the negative reaction, Kapoor issued a statement terming the criticism as unfair. 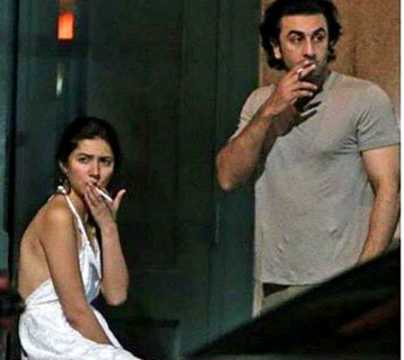 “I've gotten to know Mahira in a personal capacity over the last few months. She is somebody who I admire and respect, for her achievements and even more for the person she is. It is very unfair the way she is being judged and spoken about. What is also sad is the inequality in judgment just because she is a woman. I request you to stop the negativity and move on with your beautiful god gifted lives. Peace and love," Kapoor said in the statement.

In a fun addition, the actor wrote, "PS: Both smoking and hate are injurious to health."

The two actors had been spotted earlier as well at the Global Teacher Prize Ceremony in Dubai earlier this year. The two were snapped engaged in a conversation throughout the event, which led to rumours of a relationship between them.

What were Ranbir Kapoor and Mahira Khan up to in these curious videos?

Earlier, actors Varun Dhawan, Parineeti Chopra, and Ali Zafar, too, had defended the actress calling the criticism 'unfair'. Zafar had put up a post on his Instagram account saying, "Every woman has the right to make her own choices in life (as long as she’s not hurting anyone else, just like we men do."