On her 37th birthday, Madhur Bhandarkar gets candid on how Kapoor-Khan turned out to be the opposite of what he had heard.

Kareena Kapoor Khan celebrates her birthday today. The beautiful and talented actress turns 37. She hit the right note right on her debut Refugee (2000) and in all the following years, she has given a number of high quality performances. One of her career best acts remains Madhur Bhandarkar’s Heroine (2012).

On her special day, we got talking exclusively to Bhandarkar himself. The filmmaker spoke on how Kapoor Khan turned out to be the opposite of what he had heard about her and her lack of filmi flair despite being from the most affluent film families of Hindi cinema.

Bhandarkar was amazed at how the actress showed no qualms in going against her contract to complete Heroine. “A lot of people had earlier said that Kapoor Khan gives a lot of stress. Trust me, for me she has worked on Sundays also against her agreement that she won’t work on that day. It was also in her agreement that she won’t work after 9:30 or 10 pm. But she has worked for one or two am for me [sic]. She really went out of the way even for the promotions,” he said.

Kapoor Khan’s interest in humour in between shots also pleasantly surprised the filmmaker. “The best part about her is that she can switch on and switch off from her character. Personally, behind the scenes, I am a very humorous person. I keep sharing one-liners and jokes. My movies are serious but behind the scenes I am like this,” he said. “She is also exactly the same. As soon as I say cut, she would ask what was that joke shared between shot. We got along well right from the first day itself.”

Bhandarkar considers Kapoor Khan’s act in the climax as the best shot of the film. “In her whole journey in the film, she is fighting for the stardom she required. She so badly wanted stardom that she leaks her own private tapes. She wanted her movie to be a hit at the box office. The movie even works. But she didn’t want to be a part of the glamour world any more. In the climax, she leaves behind the thing she fought for,” he said.

Bhandarkar elaborated saying, “In the end there is a shot where somebody recognizes her somewhere in France and asks if she is Mahi Arora. Then the one look she gives, which gives me goosebumps even while talking to you. She gives a 10 second look to the man and says, ‘Nahin’ (No, I am not). And she walks off in slow motion. It was such a poetic end. Trust me, people have called me and said that the climax couldn’t have been better.” 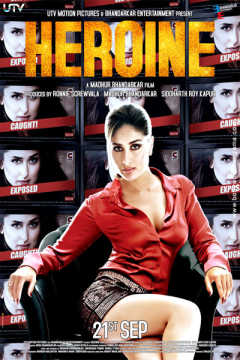 The filmmaker feels glad when he gets feedback about Kapoor Khan on this film. “I feel very happy when people say that Kareena’s best work is Heroine. Even today whenever it is played on TV, people call me and praise her performance. She played Mahie Arora so brilliantly. She is flawless when the camera is in front of her. The way she portrayed such a complex character which had lots of shades, edginess and crankiness. And she got it so right. I really enjoyed working with her,” he said.

Bhandarkar had earlier signed Aishwarya Rai Bachchan for the role. But she couldn’t go ahead because of pregnancy. Bhandarkar informs that the actress had no issue that she wasn’t the first choice for the film. “Absolutely, no problem at all. Kareena has always been an admirer of my work since Chandni Bar (2001) days. Whenever she used to watch my film, she used to call me, be it Corporate (2006), Fashion or Traffic Signal (2007),” he informed.

The filmmaker’s friendship with Kareena goes a long way. Not many would know that Bhandarkar had approached Kareena even for his much-loved Page 3 (2005). “I have to tell you that I had approached her for Page 3 (2005) also. But the dates and economics didn’t work. But anyways, we felt we can work again later,” added Bhandarkar.

Contrary to the general perception, Bhandarkar says that Kapoor Khan doesn’t show off the fact that she comes from the most reputed filmi family. “She is not a very filmi person. She comes from a very renowned filmi background. But I felt she doesn’t have that filmi-ness in her. She is very cool and sorted,” Bhandarkar signed off.