Sadhana: The making of a style icon


On her 76th birth anniversary, a look back at how Sadhana become a national fashion star.

Sadhana Shivdasani was already destined for stardom after being named for the actress-danseuse Sadhona Bose, who happened to be her father’s favourite at the time. The actress’s family relocated to Mumbai from Karachi after the Partition in 1950. As a youngster growing up in the city, she was always keen to become an actress.

As a 17-year-old, she got her chance when she acted in the first Sindhi film Abana (1958) as actress Sheila Ramani’s younger sister. The story goes that Ramani recognised the young girl’s potential even then and wrote, ‘One day I will come and ask you for your autograph,’ as Sadhana asked her for an autograph. The statement was proven true in just two years.

Sadhana made her Hindi film debut with Love in Simla (1960) opposite Joy Mukherjee, son of Filmalaya founder, S Mukherjee.

In an interview with Indian Express, she had said, “That's where I saw an advertisement that Filmalaya, which was being launched by S Mukherjee, wanted new faces. Mukherjeesaab had just branched out on his own and for a year I trained at his school, then housed in his famous residence Grotto Villa itself, and my teacher was PD Shenoy, who later made several films.”

The love story made her an overnight star. The young actress was dressed in the latest styles and sported a fetching haircut, suggested by the film’s first-time director RK Nayyar.

Inspired by Audrey Hepburn, Sadhana became a fashion icon early on with her ‘Sadhana cut’. Way before Jennifer Aniston caused a stir with her iconic ‘Rachel’ hairstyle and haircut from the TV show Friends, Sadhana was the one young girls wanted to emulate. 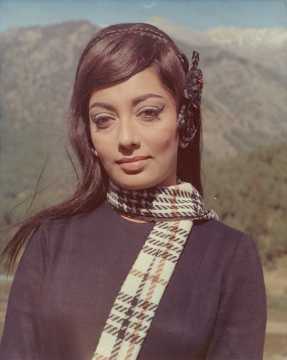 In the same interview, the actress revealed the back story behind the famous hairdo. “My forehead was very broad and that stood out when a new camera had arrived at S.Mukerjee's office and all of us would take photographs of each other. In such cases, the conventional way out was to stick a patch of hair on the forehead, but Nayyarsaab had a better idea. He told me that Audrey Hepburn had the same problem and that's why she had cut her hair in a fringe. He made me do that and to date, the fringe is known among Indians as the 'Sadhana cut'!"

She fell in love with Nayyar and five years later, despite her parents' initial doubts, the two got married. In the 1960s, Sadhana was a popular choice for directors. She acted in Bimal Roy’s Parakh (1960), Navketan’s Hum Dono (1961) opposite Dev Anand and Manmauji (1962) with Kishore Kumar.

In her first colour film, Mere Mehboob (1963), she was a picture of perfection as the aptly named Husna Begum. She pulled off her Indian look with equal aplomb. Later, with Yash Chopra’s multi-starrer Waqt (1965), she set off another fashion trend, the tight-fitting churidars with mojris which showed off her figure.

She told Movie magazine in 1990 interview, “I racked my brains and then came up with the idea of a modernising the Muslim salwar-kurta. I suggested that instead of the salwar I could wear a churidar and a tight, sleeveless kurta with embroidery on the neck and below the bustline. When I described it to Yash Chopra, he didn’t like the sound of it and rejected it, saying that I should stick to salwars for the film. But I don’t give up easily once my mind is set on something. So I spoke to my designer Bhanu Athaiya and described exactly what I had in mind. She stitched a churidar-kurta for me based on my specifications. When Yash saw me in it, he wanted me to wear the same thing for his film! That’s how another trend began.”

Meanwhile her films with director Raj Khosla, Woh Kaun Thi? (1964) and Mera Saaya (1966) increased her demand. With timeless songs like ‘Lag Jaa Gale’ and ‘Mera Saaya Saath Hoga’, the actress was the woman of allure and mystery whose identity kept the audience guessing until the very end.

The 1960s belonged to Sadhana but the end of the decade, she had to get treatment for her thyroid problem. She travelled to the US and came back to make Intaqam (1969) and Geetaa Mera Naam (1974), which became her last film. A few films which were delayed released intermittently in the 1970s but Geetaa Mera Naam was the last film she signed.

In later years, she turned reclusive after her husband’s death in 1995. But for Hindi film audiences, the image of the fashionable Sadhana prevailed in their memories. Sadhana passed away in 2015 after a brief illness.