Rajkummar Rao: Actor is supposed to play characters, not show six-packs every time


Rao speaks about his films, confesses that he worked harder for Trapped than for Bareilly Ki Barfi, and explains why he doesn’t believe in the ‘hero’ theory.

Rajkummar Rao has always had the talent, and he has won over the audiences, critical and popular, for all the characters he has portrayed so far.

The latest came from none other than Amitabh Bachchan who even penned down a note for the young actor for his work in Bareilly Ki Barfi (2017). Rao impressed all with his portrayal of Pritam Vidrohi — a meek sari salesman who trasnformed into a macho goon at the snap-of-a-finger.

Very few actors truly live their characters like Rao does. Be it Deepak Singh in Citylights (2014), Vijay in Queen (2014), or Shaurya in Trapped (2017), Rao seems like a man possessed with perfection in all these films. He’ll soon be seen in a poetic dark comedy, Newton, that hits the screens on 22 September.

Newton is the story of a government clerk who is entrusted with the task of conducting a free and fair election in the militant area of Chhattisgarh.

Rao was present for a group interaction for his upcoming film. He was seated in room, hands folded and placed on his chin. A black sports cap sat on his half shaved head, something he’s done for a web series on Subhash Chandra Bose. What is he thinking? You ask yourself, hope he’s not gone into the shy, meek Pritam Vidrohi avatar! Once everyone is seated, he warmly introduces himself as "Raj", much to the surprise of the journalists present.

Over the next 20 minutes, Rao spoke about his films, confessed that he worked harder for Trapped than for Bareilly Ki Barfi, and explained why he doesn’t believe in the ‘hero’ theory.

How much do you relate to Sir Issac Newton?

Newton is someone who is very idealistic in nature, I’m also idealistic, when it comes to my work, I could relate to him in so many . He is someone who will do his job with full honesty, and integrity. That’s how even I am. I don’t want to corrupt myself when it comes to acting. I don’t want to follow the herd mentality, want to make my own path and just stick to it throughout my career. I had a lot of discussions with Amit Masurkar about my character.

Before you took up the film, like most urbanites, you might have known Naxalism through just the media reports. How was it once you started shooting?

Of course, as you rightly said, I was judging it from whatever I had heard till date, I was slightly scared before we started shooting, and went there. Once I went there, people welcomed us. They are such happy people, so supportive. It’s untouched beauty, no one has ever shot there before, we found some real locations. And we used some local people in our film, who are such fantastic actors. They are always smiling. They are not complaining about anything in life. We had a great time shooting. Apart from one day, when a guy came and asked us to leave in 15 minutes, we didn’t face any problem.

You’ve received lot of acclaim for films like Citylights (2014), Aligarh (2016), but would it be fair to say that you’ve never got such widespread acclaim as with a Bareilly Ki Barfi (2017), which is a popular film?

Of course, it was a breather for me. It was a mass connect that happened with me. But it’s not that I had to work any less harder for Bareilly Ki Barfi, but that’s the fun of being an actor you never know the character will click or not. I worked harder in Trapped than in Bareilly Ki Barfi, but people of course, will remember a Bareilly for a long time. 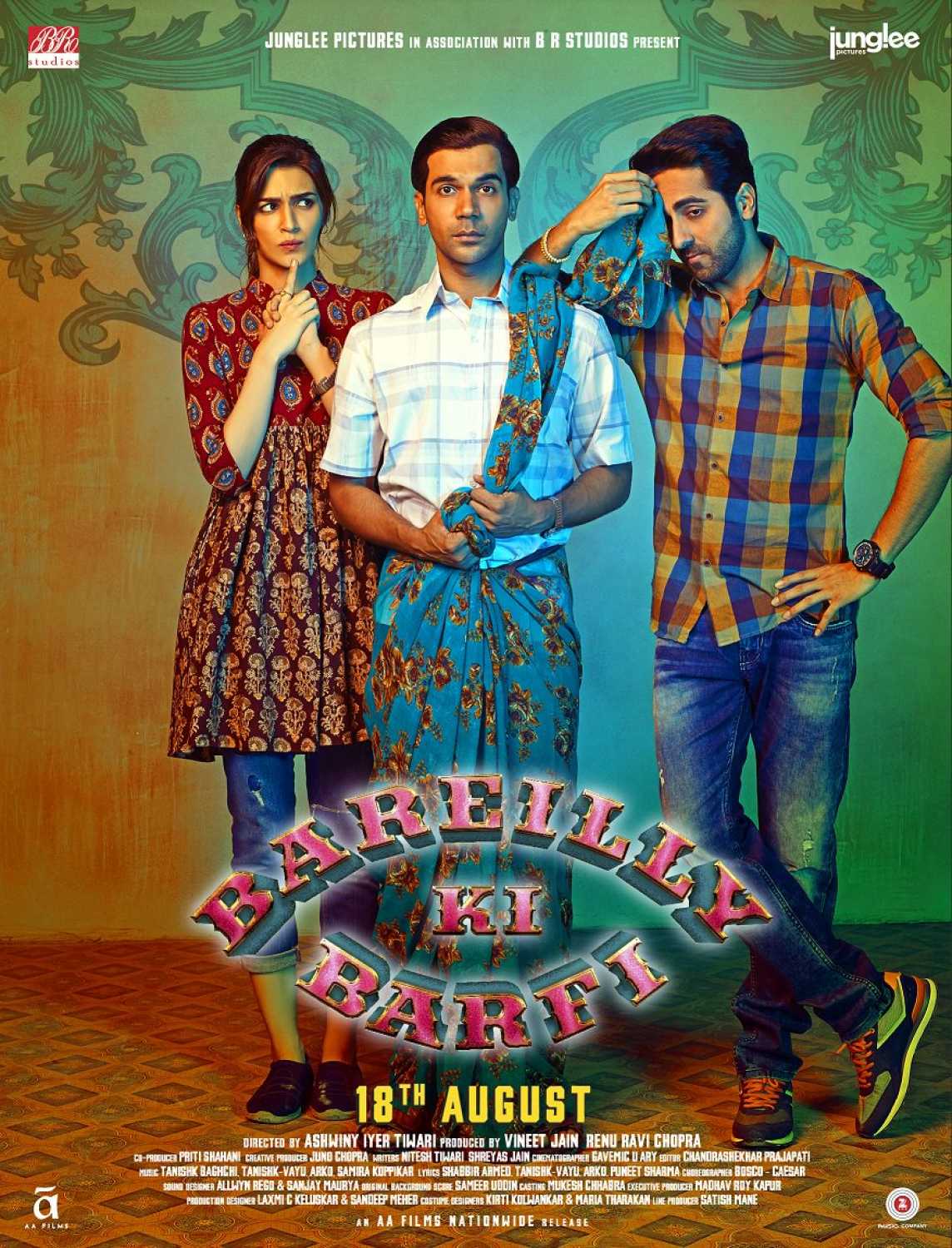 A Bareilly Ki Barfi is perhaps a reminder that a traditional romantic comedy if served right, is still the ideal film for Indian audiences. Is that right?

Absolutely, the credit goes to our writer also. It was a beautifully written script, all the characters were well etched out. The dialogues really clicked with the audience. There was some improvisation from my side, which I try and do with all my characters. It had the mass connect. The film was set in a small town, majority of our population live in small towns. So, it instantly connected with the audience. People could relate to such characters.

It’s just so fascinating to watch you change gears in Bareilly Ki Barfi. You can change from being the meek into the might in a second. How do you do that?

(laughs) I don’t know. That’s my job. I don't how I do that. For Bareilly, my biggest challenge was to differentiate myself from these two different personalities, look different, sound different and style differently, the body language and of course, the UP (Uttar Pradesh) accent.

The kind of characters that you play can be emotionally draining, how do you get out of the character?

Well, I travel. I finish my film, I forget everything. I’m out of the country, or out of this city (Mumbai) for sure. Take it out of my system, and then come back and start preparing for my next film.

You’ve done films like Shahid (2013), Aligarh (2016), and Newton (2017) that are very socially relevant films. Have these films made you a politically conscious person?

No, I was always a very politically aware person, I know what is happening in the country or world wide. Whenever possible, I try and put my point forward. But these films helped me in getting to know things better, they helped shaped my political views.

I didn’t know about Shahid. I didn’t know that there were so many people who are wrongly accused, and are still behind the prison for something they haven’t done.

For Citylights, we see so many migrants in the city but we don’t really think about them, what if someone is actually going through a life like Deepak Singh (character in Citylights), such films make you more aware as human beings. I definitely believe that you grow as an actor and human being with each and every film.

Well, I have always believed in a certain kind of performance, I wanted all my characters to look human, to sound human and to be relatable. I don’t believe in this ‘hero’ theory. An actor is supposed to play the characters on screen, and not show six-packs every time. Not every character can have six pack abs. This is something that I have already believed in and applied in my life that if it requires for me to look, ugly on screen, I’ll do that. If I shave my head half, no matter what people say, I’ll do that for my character.

Have you worried about the low box-office collections?

I’m not really concerned, but my films should actually break even. I want my producers to get their revenue back so that they can make many more Trapped and Shahids, Newtons.

Despite the critical acclaim, I’m so surprised that films like Trapped, Citylights, Aligarh, they get very few screens. The content is good, it's backed by great performances, somehow the producers and distributors seem reluctant to have a wide release for such films?

Well, the great part is they manage to recover the costs. Imagine what if they started having 3000 screens.

But that’s how the economics are. I hope that changes really fast. Industry is going through a change where we are respecting content now, and making it a success. I hope that will change.

Omerta was screened at the Toronto International Film Festival. How was it received?

The response was tremendous. As actor, It was a very disturbing space for me to get into the psyche of a character like Omar Sheikh. It was not an easy process. It was a dark world that we are trying to explore. It’s something that’s never been seen or done before. I myself saw the film for the first time at TIFF and it just made me so numb. This shook me up completely.

But I hope the film is not being emphatic to Omer Shiekh.

No ,we are not glorifying anything. We are just portraying the reality, showcasing you the facts that how it happened, why it happens. Of course, it (terrorism) is the existing truth to the world. It’s one of the biggest problems we are facing. There are boys like Omar who are getting brianwashed and taking this path. Shahid Azmi (his character in Shahid) also went through a personal injustice, but he chose a different path. Whereas, an Omar chose a different path.

There were reports saying that Aishwarya Rai Bachchan was more keen to have you in Fanney Khan. How excited are you to work with Aishwarya?

Perhaps, one will have to ask the people who filed those reports. I’m very excited to work with Aishwarya.