The statement by the actress at the recent Toronto International Film Festival describing Sikkim as 'a state troubled by insurgency' earned her the ire of residents.

After drawing flak for her comments on Sikkim and its supposed insurgency situation, actress Priyanka Chopra has apologized to the state's tourism minister, Ugyen T Gyatso. The minister, in an interview with television channel NewsX, said Chopra's production and the director and team of Pahuna had tendered a verbal and written apology for the comments.

Chopra's Purple Pebble Pictures is producing the Sikkimese film directed by Paakhi A Tyrewala. The film was recently premiered at the Toronto International Film Festival (TIFF).

Speaking about the film to ET Canada, Chopra had said, "This is a Sikkimese film. Sikkim is a small state in the northeast of India which never had a film industry or anyone who made films from there. And this is the first film ever that’s come out of that region because it’s very troubled with insurgency and troubling situations."

The remark earned Chopra the ire of the state's residents and netizens. Biswatosh Sinha, a scriptwriter from Assam, wrote: "Dear Priyanka Chopra, Sikkim is a peaceful place and #Pahuna is not the first film from the region. Plz get the facts right about Northeast."

Tawqeer Hussain tweeted: "In fact it is foolish to create controversy on Priyanka Chopra's statement over Sikkim as celebs like her are 'politically illiterate'. Earlier, we have witnessed that many celebs don't know the name of the President of India, so don't expect them to be politically correct."

In a blog on the Hindustan Times newspaper's website, Sikkim-born India footballer Bhaichung Bhutia wrote, "It is true that parts of Northeast are violence-hit but all states are not. One of the main reasons why people from ‘mainland’ India tend to lump all states together is because of a lack of awareness towards the region."

Incidentally, Chopra is the tourism ambassador of neighbouring Assam.

Reacting to the comments in his interview, Gyatso said, "It is totally untrue... We are a very peace-loving people in a law-abiding state. I don't know why she said that, but anyway she has apologized by her company... her producer, director have sent a written and verbal apology also."

The minister also refuted Chopra's statement that Pahuna was the 'first' film from Sikkim. 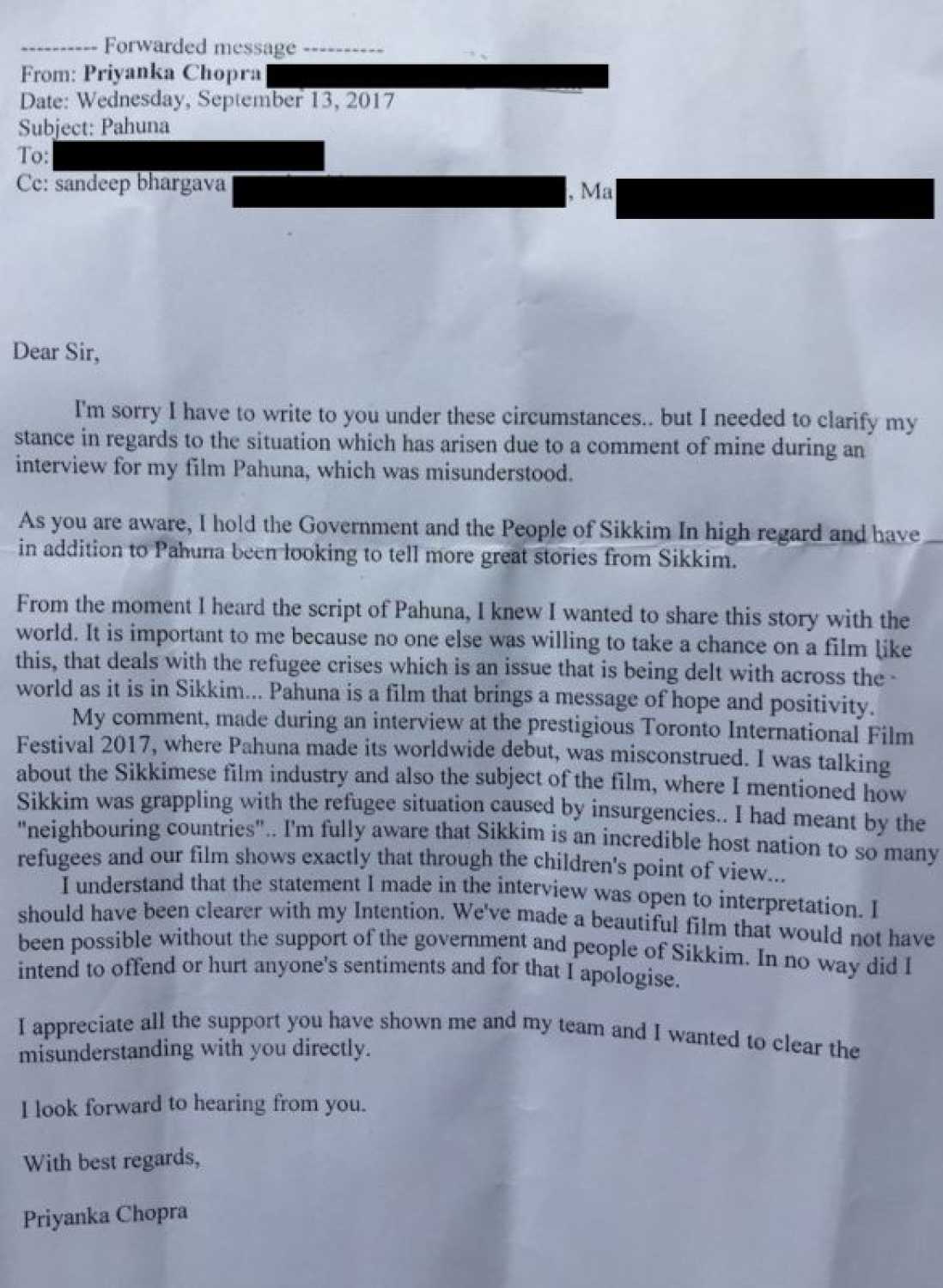 Chopra, in a detailed letter to the government of Sikkim, wrote, "My comment, made during an interview at the prestigious Toronto International Film Festival 2017, where Pahuna made its worldwide debut, was misconstrued. I was talking about the Sikkimese film industry and the subject of the film, where I mentioned how Sikkim was grappling with the refugee situation caused by insurgencies... I had meant 'neighbouring countries'... I am fully aware that Sikkim is an incredible host nation to so many refugees and our film shows exactly that through the children's point of view..."

The actress went on to add, "I understand that the statement I made in the interview was open to interpretation. I should have been clearer with my intention. We have made a beautiful film that would not have been possible without the support of the government and the people of Sikkim. In no way did I intend to offend or hurt anyone's sentiments and for that I apologise."

While it might not affect the film much, Chopra will need to be more careful when making statements in the future.