The teaser for Triveni's Tumhari Sulu captures the innocent Vidya turning on her 'sexy' charm on air.

From its first poster, the makers of Vidya Balan-starrer Tumhari Sulu have sought to hide her face and look. The teaser for the film, released today, might have an explanation for this promotional strategy. Charming, innocent and comic, the teaser manages to capture Vidya at her natural best. 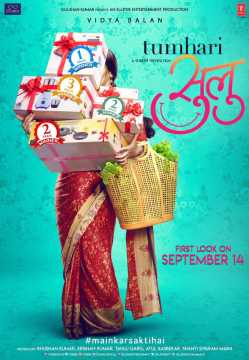 The teaser begins with a seductive voice trying to train Sulochana aka Sulu (Vidya Balan) on how to sound more sexy. While there is no credit, if one had to hazard a guess it would have to be Priyanka Chopra's voice doing the training. The teaser then cuts to Sulu practicing her 'sexy' voice in a gym filled with men pumped up with testosterone. Her completely nonchalant attitude is a contrast to the hilariously open-mouthed expressions of the people around her.

It is likely that Vidya plays a regular housewife who sends in a voice recording as part of a radio contest. The sight of her hosting a show on-air is perhaps an indication of the prize. The show is one of the many late-night variations of 'Dr Love', and the innocent Sulu is a misfit for it. It also explains why the makers did not show the face of the character, as it fits in with the theme of a 'faceless voice' of a radio host.

The teaser stands out for Vidya's natural ease and innocence. The actress manages to sound sexy without looking so, and that makes for the comic element. Her comic timing will make for an interesting addition to the film. Vidya had earlier played a radio jockey in Lage Rahe Munna Bhai (2006).

Tumhari Sulu is directed by Suresh Triveni, and produced by T-Series and Ellipsis Entertainment.