Before deleting his account, however, the actor requested the media not to drag him or his sister into the battle between his parents and Kangana Ranaut.

Sooraj Pancholi has been keeping a low profile following an unsuccessful film debut. Plus there is the Jiah Khan suicide case that continues to dog him. Now, the young actor has got caught in the war between his parents — senior artistes Aditya Pancholi and Zarina Wahab — and Kangana Ranaut.

Ranaut made sensational allegations against Aditya Pancholi. The actor was defended by wife Zarina Wahab who ridiculed Ranaut's claims. Caught in the muddle were Pancholi’s children, daughter Sana and son Sooraj, who has now deleted his Twitter account.

Before deleting his account, the younger Pancholi made a plea to the media not to drag him or his sister into the controversy.

“It’s my humble request to all media platforms out there to please keep my sister and me out of the current situation," he said in a series of tweets before deleting his account. "I have nothing against anyone and I would like to keep away from the mess.” 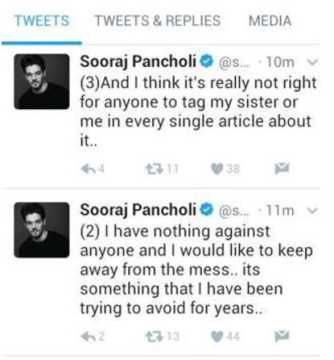 Meanwhile, Sooraj Pancholi's worries in the Jiah Khan case are far from over with the late actress’s mother continuing her legal battle.

A report on the India Today magazine's website said Rabia Khan is set to prepare a third report from a British forensic expert to prove her claim that her daughter did not commit suicide but was murdered.

Jiah Khan was found hanging in her apartment in Mumbai on 3 June 2013. The case was handed over to the Central Bureau of Investigation (CBI), which ruled out murder in its report filed in August last year.

Rabia Khan then hired an independent British forensic expert, Jason-Pane James, who claimed in his report that Khan’s suicide may have been staged, and the marks on her face and neck indicate it was not a simple case of suicide.

Rabia Khan moved the supreme court in March this year after her plea seeking a special investigation team to look into the case was rejected by the Bombay high court on 9 February.