Birthday interview: Atul Kulkarni gets candid about films and his journey


As the actor turns 52 today, Cinestaan.com catches up with him for a conversation about Marathi cinema, the lack of freedom of expression and more.

Atul Kulkarni is known for his powerhouse performances, be they in his debut film Hey Ram (2000) or second film Chandni Bar (2001), both of which won him National awards, or his later films like Natrang (2010) and Premachi Goshta (2012). Known for not shying away from voicing his views, the actor showed the same attitude during this conversation.

On Kulkarni’s 52nd birthday today (10 September), the actor got candid about his career and journey so far and also spoke about the deteriorating freedom of expression not just for celebrities but also for common people. Excerpts:

What are birthdays for you every year?

Nothing really. It’s like any other day because in my family and where I come from, birthdays were never a big event. Even my mother used to forget my birthday sometimes. But of late, it has become an event generally for people. What I basically do is that I try to be in a place where there is full range to my cellphone, so that I can take calls and reply to messages right away. But there is no special planning ever.

You have been acting for many years now. How do you look at your journey and the challenges?

This field itself is challenging in the sense that it is extremely uncertain. Nobody in this field can say he or she is settled. You may be anyone, but there is constant uncertainty about everything. Working in this field as an actor for 15-20 years itself is a challenge. 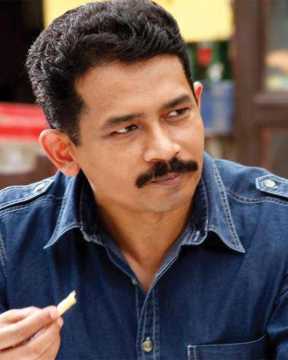 When did you decide to venture into the field of performing arts?

I was doing my BA [Bachelor of Arts] in Solapur [southern Maharashtra], where I was brought up. I used to perform then at college gatherings. That was my first ever conscious performance, you can say, in front of an audience. I liked the entire process and I joined an amateur theatre group, which used to do plays. I worked with them for 2-3 years. Then I felt I should do it as a profession. I went to the National School of Drama (NSD) from 1992 to 1995. In 1995 I became a professional actor when I was about 30 years old.

Who was your guru or idol when you started out?

I absolutely don’t believe in the concept of guru, idol, and all that. I am completely against it. In our country, as soon as we consider anyone guru we reach ‘Guru Devo Bhava’ and I am a complete atheist. I am basically against the concept that any one person is your idol. There is nothing called an idol. You can pick and choose certain things from certain people. But considering one person as your everything, as your idol, is a wrong concept, according to me. So, to answer your question, no one. I have taken lots of things from lots of people.

How did your entry in cinema happen?

Hey Ram (2000) was my first film, which was directed by Mr Kamal Haasan. Before that, when I came to Mumbai from NSD in 1995, I was doing a play called Gandhi Viruddh Gandhi, where I was playing Mahatma Gandhi. I did it in three languages — Marathi, Hindi and Gujarati. And Kamalji was making a film called Hey Ram at that time. He had heard about this play. He called me to Chennai. I was actually given the role of Shriram Abhyankar. Then Madhur Bhandarkar saw Hey Ram and he offered me Chandni Bar (2001). The film became a hit. So after that I just kept doing films one after the other.

Quite a few actors believe that the joy of working in theatre is a different joy altogether. Do you miss theatre?

Absolutely not. I do not miss theatre at all. I have been loving working in films.

How challenging is it to adapt to the working style of different industries?

When we are talking about industries, we are talking about states. In India, every state is like a country due to the difference in culture, language, everything. The culture gets reflected in whatever you are doing, not just the film industry. So, there is nothing simple or difficult about it. It is just understanding the culture, method of working, and thinking of a particular geographical area and adapting yourself to that. It is minor. There is no huge change as such. After all, you are dealing with human beings.

What are your criteria for choosing a film?

What I look into is basically the story. Then the storyteller and the character. It’s a combination. But mainly it is the story.

You have acted in some prominent Marathi films in recent years like Natrang, Premachi Goshta, Popat (2013) and Rajwade And Sons (2015). What is your opinion on the current state of Marathi cinema?

We must understand that the modern Marathi film industry is just 8-10 years old. We are in a very infant stage right now. I think Marathi cinema should compare itself only with Marathi cinema that happened a year before and not with any other industry. You don’t compare a 10-year-old child with a 70-year-old person. That mistake shouldn’t be done. We should just check what we have done last year. How much audience have we been able to attract? How many good films have we been able to make? And just try to improve upon ourselves. That is the only thing we should concentrate on, according to me.

You are one of the few personalities who never shies away from giving an honest opinion on socio-political issues on social media. Do you believe you are living in an era where it is becoming more and more difficult to express your views on socio-political matters?

If you ask me, we are in such a vulnerable field and in such times where you can’t really express what you actually feel like. I think we have lost that liberty. Not just for actors, we have lost it even for the common citizens. I don’t think we have left any room for discussion. We have just arrived at a situation where if you don’t think like me, you are my enemy. So, you are either with me or you are my enemy. That is the space we are in. We have lost that middle ground. We are losing it fast. This is the case even for the common man. I have heard from so many friends that they have left their family WhatsApp groups.

But yes, actors are in a more vulnerable position, I would say. It is absolutely unfortunate. And the more popular actor you are, the more vulnerable you are. When I hear from people that our stars don’t take a position, I feel like, come on, you have not left any space. You have not left a culture in this country where a popular actor can voice his opinion and not get his film affected. If you are going to damage a film, you are damaging the producer and the entire business. The vulnerability of this field makes us bind our tongues.

You are starring in Manikarnika: The Queen Of Jhansi. How is it shaping up?

We finished our first schedule where we had lots of fight sequences. Nick Powell, the famous Hollywood action director, had flown in. He has done action for The Bourne Identity (2002), The Last Samurai (2003), Gladiator (2000), etc. He was here for nearly two months. We rehearsed and underwent training for sword fighting and horse riding. Then we went to Hyderabad and shot for a month almost.