To Bikini or not to Bikini – Remembering An Evening In Paris


Celebrating 50 years of Shakti Samanta’s film, we recall the brouhaha over a bikini and revisit the Parisian spectacle.

An Evening In Paris (1967) is remembered for many reasons — for being a stylish thriller, offering stunning vistas of Paris like never before in Hindi cinema, its melodious music and memorable songs, and Shammi Kapoor’s trademark antics. But the film's everlasting claim to fame is the popular belief that it was the first to feature a Hindi film actress in a bikini. Interestingly, the sexy outfit was suggested by none other than the heroine, Sharmila Tagore, who wanted to wear the two-piece in the film!

The 1960s was a decade which saw intense debate around film censorship, particularly on the issue of kissing in films. Film magazines regularly discussed the kiss in articles debating what should or should not be screened in India, an issue that remains a hot topic even half a century later. Given this charged atmosphere, the film's director, Shakti Samanta, wanted his heroine to wear the safer one-piece swimsuit so as to not attract the hawk-eyed Central Board of Film Censors, as it was known then.

Tagore reluctantly gave in but wore the two-piece for a photo shoot with Filmfare magazine. The shoot, which included other pictures of her posing in a bikini, astutely noted in the accompanying caption that the shoot had “some beachwear and a lot of Sharmila”!

The photo shoot created quite a sensation. Highlighting the sensuousness of the film, a January 1968 Filmfare caption advertised the film as being “full of sex, songs and sensation”.

An Evening In Paris was certainly all of those things — sexy, stylish, spectacular in the truest sense of the word, and with memorable songs. But the film fumbled in the meandering plot that ambles along and takes a while to pick up pace.

Deepa (Tagore) is a rich woman disillusioned with love after encountering a series of gold-digging suitors. In her quest to find true love she decides to go to Paris and hides her identity from the men she meets. She comes across Shyam aka Sam (Kapoor), who is determined to make her change her mind about Indian men. Meanwhile, Shekhar (Pran) owes money to a gangster Jack (KN Singh) and wants to woo Deepa to get his hands on her money. Jack mistakes Deepa for Suzy (Tagore), a club dancer. Jilted by Deepa, Shekhar approaches Suzy with a devious plot to get at Deepa’s money. 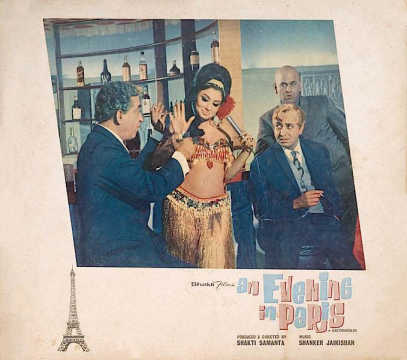 The contrast between the demure, traditional Deepa and the brazen, fashionable Suzy is obvious and quite like films that feature artistes in double roles. Samanta, who had launched Tagore’s Hindi film career with Kashmir Ki Kali (1964), consciously etched out one of the most glamorous roles of her career in the film. They were to work together again on the most memorable films of Tagore’s career, Aradhana (1969) and Amar Prem (1972), also teaming up for Amanush (1975) and Anand Ashram (1977), amongst other films.

The cinema of the 1960s in India was marked by changing technology in terms of sound recording, shooting equipment, the use of colour, etc, all of which created the desire in filmmakers to capture the beautiful outdoors as opposed to shooting in studios. Kashmir Ki Kali (1964) explored the stunning landscape of Kashmir while films like Sangam (1964), Love In Tokyo (1966), An Evening In Paris (1967), Night In London (1967), Around The World (1967), and Spy In Rome (1968), amongst others, travelled the world and opened it up for the visual consumption of desi audiences.

In her essay, Ranjani Mazumdar explores the ways in which Bombay’s global travel films of the 1960s unpacked the 'postcard imagination' by bringing together tourism, consumerism, film technology, fashion, and music. An Evening In Paris was firmly part of this urge as the cinematography by V Gopi Krishna captured the beauty of Paris. In fact, in an interview with Mazumdar, writer Sachin Bhowmick recalled how he was taken to both Paris and Tokyo before writing the scripts of An Evening In Paris and Love In Tokyo as the locations were to be part of the structure of the story.

Other than the visual landscape, Shankar-Jaikishan's evergreen music remains one of the highlights of the film. In an interview, Ashim Samanta, son of the late filmmaker, recalled the shooting of the scene in which Shammi Kapoor had to be suspended from a helicopter during the song 'Aasmaan Se Aaya Farishta'. Kapoor fortified himself with a large drink before filming the scene that required some daredevil moves.

The romantic French capital also served as the backdrop to the budding real-life romance between the handsome Mansur Ali Khan, nawab of Pataudi and India's swashbuckling cricket captain, who had fractured a finger at the time and was unable to play for a while. Rumour has it that he flew down to Paris to woo Tagore during this time. What better city to do so!