The film is the directorial debut of costume designer Pratima Joshi.

Priya Bapat and Mukta Barve
give your opinion

Well-known Marathi film actresses Priya Bapat and Mukta Barve will be seen together for the first time after Aika Dajiba (2010) in the upcoming film Aamhi Doghi. The film is the directorial debut of costume designer Pratima Joshi. It is set to be released on 16 February 2018.

Talking about the film, Joshi said in an official statement, “Amhi Doghi revolves around the story which is close to the heart of today’s young women in all types of relationships, including mother-daughter or friends or father-daughter.”

She added that the film is also about respecting others' point of view. “One should not be restricted to his or her own point of view and also give equal importance to others' views. The story revolves around this ideology and it will be relatable to every young girl. It will help the young audience to think sensitively,” she said.

Barve was last seen in this year’s Hrudayantar, where she was cast opposite Subodh Bhave. Co-incidentally, that film was the directorial debut of the well-known costume designer Vikram Phadnis.

Bapat, on the other hand, has been more selective. She hasn’t been seen this year. Her last appearance was in Sachin Kundalkar’s Vazandar (2016).

Joshi has also been an assistant director to filmmaker Chandrakant Kulkarni in as many as 10 films. 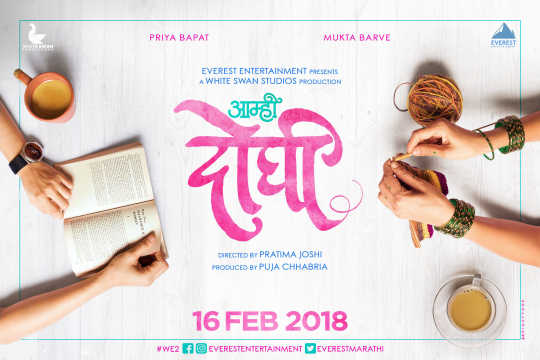