Digital is the future: Richa Chadha talks about fast changing world of cinema


In an exclusive interview, the actress spoke about her upcoming film, Jia Aur Jia, and the transition from large screen to the digital medium in search of better content for her craft.

It is easy to be charmed by actress Richa Chadha's nonchalance. The actress met Cinestaan.com in the post-Diwali weekend, looking relaxed in her Yari Road (Andheri) apartment. A cosy home filled with bohemian decor is perhaps an apt residence for the actress whose choices in films are often out of the ordinary.

After her successful and popular tryst with the digital medium through the Amazon Original series, Inside Edge, the actress returns to the big screen in Jia Aur Jia. The film will see her join actress Kalki Koechlin on a journey across Sweden in search of some much deserved peace and happiness. The film is set to be released on 27 October, and Chadha is certainly feeling positive about it.

Speaking with Cinestaan.com, the actress opened up about the challenge of working in a male-dominated industry, grappling with the 'grammar' of the digital medium and why cinema needs to evolve in order to keep up with the online world.

Let's talk about Jia Aur Jia. It is a wonderful and rare film about female bonding. Tell us how you came about the film.

The writer of the film, Mudassar Aziz, came to me with the script and said they needed a strong performer, but also someone who could go through a gamut of emotions. My character goes through a tragedy, but has the capacity to change. There is a journey.

When I heard Kalki was doing the film, I was even more excited because I knew her. When two people are like minded in their whole world view, so I thought it would be a cool project to be a part of. It is something new for the Hindi film industry too. There are so many male bonding films, but few with women.

In fact, the most irritating question I get asked about the film is that whether there were catfights on the sets. When I travel with the boys on Fukrey, they never ask me that. There's a complicit culture of sexism in that.

It is changing though. There is a flow of female writers and directors who are bringing a new perspective. Gauri Shinde, Ashwini Iyer Tiwari among them...

If I had to do a best director-ess award, these would be the five nominations. Irrespective of whether they have made a film or not. There are so few. There are quite a few women in television, in production, in fashion. But in films there is a lack. It is changing a little bit, but there is a need for more.

One sign of that change is your character in Jia Aur Jia, who is an entrepreneur. Although it is a light-hearted film on the surface of it, there is an undercurrent of a tragedy going through the entire plot?

Yes, she is going through a tragedy. Her character is actually clinically depressed. You know how a lot of people travel for escape, she is one of those. She wants to get out of India where she lives, and takes a solo vacation to clear her head. But because it is a budget trip, she ends up meeting this weird girl on acid (laughs), as her partner.

There is also a reassessment of their values, how you define success. If it is just money or power, things like that.

Oh, I have a huge wishlist of places to be. I love to travel. I try and visit new countries and culture every now and then. I want to go to the North East. I want to go to Kashmir. That's where my father grew up actually. We haven't been there in a long time. I love to go to Ladakh, hopefully on a bike.

There is also Kerala, where I plan to go later this year. The world is there, and it is such a beautiful place.

You spoke about there being no female bonding films in Hindi cinema. Is the experience different on sets as well, and how?

By the time we did this film, neither of us [Kalki or Richa] cared about what men on the set thought. It was the same with Gangs of Wasseypur for me. The testosterone on these sets was very heavy. Even on this set, apart from her and I, there was one hairdresser. 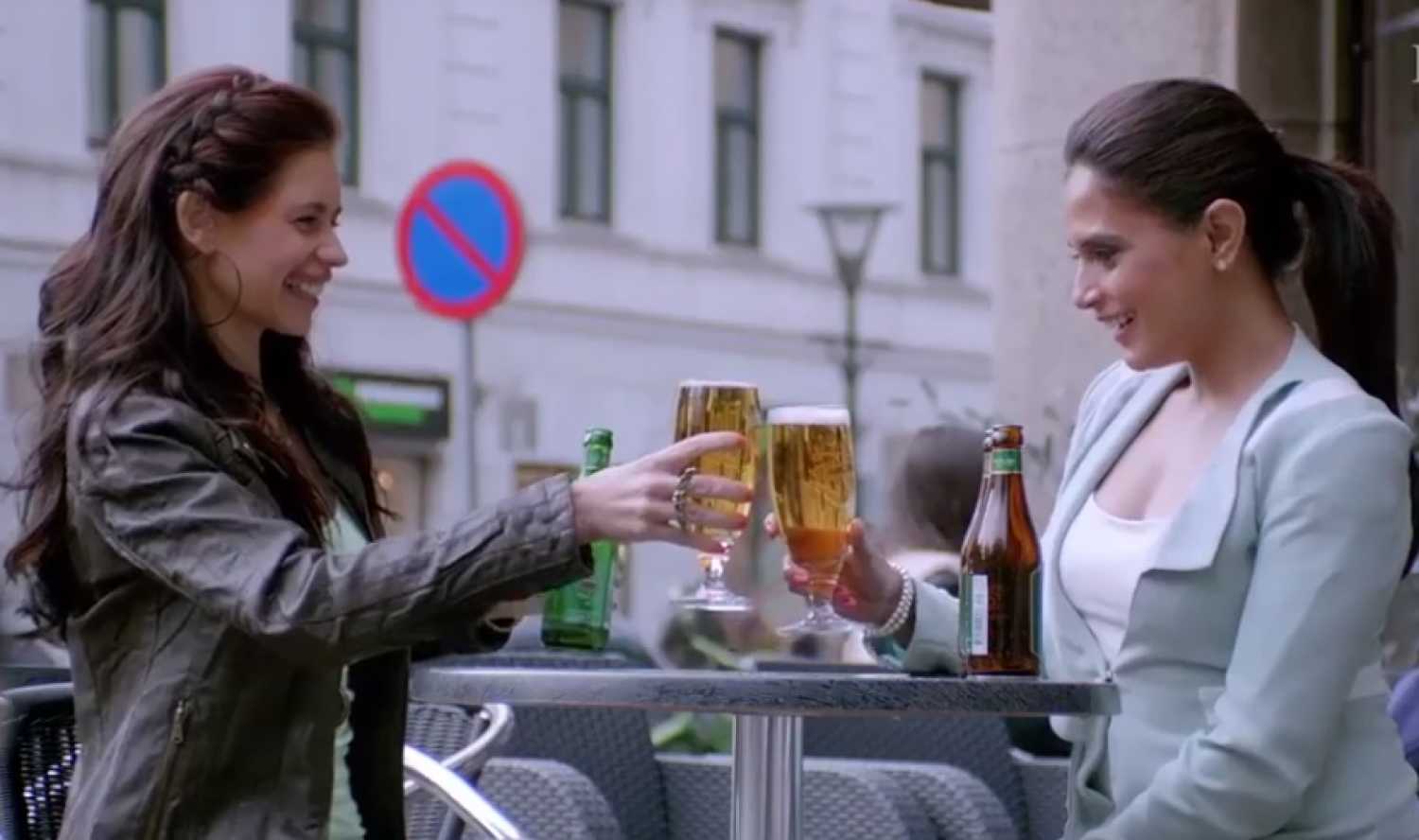 It just happens that you stop caring. We would discuss everything from tampons to nipples. You realise how important it is to normalise things.

You and Kalki both have been active campaigners on various current issues on social media, despite the risk of trolls. Does social media really help in raise these issues and normalise the conversation around them?

I think it does. It is a mixed blessing. A citizen can also be a citizen journalist. A consumer can also fight for their rights against a brand, which I see happening a lot. It gives people a voice, and removes the middle man. Often we get misunderstood by the press, and it gives us a chance to speak.

The sad thing about it is that it also makes some useless people feel significant. There is no filter to prevent them.

There was recently a silence for a day campaign by women protesting the abuse from trolls. But I don't care about the trolls because there are so many paid ones. They never use any logic. They are just out to hurt you.

When someone is being mean and nasty, it does affect you. I also get mad, even though I am so used to being trolled. That stuff affects me more than the abusive trolling, and I try and have a discussion. I feel like if you don't engage then it is lost.

Coming back to your films, you have been part of a couple of very interesting projects since Sarbjit, there was Inside Edge that really took off as an online series. What is your reasoning behind these choices?

I do think Sarbjit was a mistake, for I felt shortchanged. But we all make mistakes.

Well, Inside Edge was an experiment. I also wanted to see what it is to have no pressure of the box office. I didn't know how it would feel having no pressure on a Friday. Once it is on, you can watch episode 1-10 on a roll. Lots of people came to me and spoke to me about Inside Edge, even people I thought wouldn't watch it.

I am sure the second season, which is coming soon, is going to be better and tighter, and with better production quality as well.

Did the reaction to the series surprise you?

The numbers surprised me. It is a huge hit. From everyone at home to everyone internationally knows about it. It's good to go global. Honestly, digital is the future because cinema is not learning. It is not evolving.

It has opened up a new market on the digital platform for good content. It has gone on to redefine content in cinema.

That's the other thing that happens with the digital world and streaming platforms. You don't just rely on the box office weekend. I know that Inside Edge releases on 10 July. But people might watch it on 10 August till October till whenever they can. It is a huge comfort. Particularly when tickets are expensive, screens are low, and taxes are high, no one is going to the theatres. We have to address that problem. It is a global problem.

The movie people want to play it safe, put money in as an investment. Whether it is Hollywood or here, there is a formula. It might be the Avengers and the Transformers on one side, and the nicer films that go to the Oscars and the Golden Globes. That's the key difference on the digital medium.

I find it very enabling. I would love to do more stuff. For anybody in my generation, it is the future and whoever is not understanding it will be left behind.

Are you taking on any other projects on the digital medium?

There is the second season. I want to produce my own content. I would love to do that. It would be very interesting.

As an actor what is it that drew you to Inside Edge as a subject?

At least on Inside Edge, it was the story of a girl who is constantly made insecure about her career, her spot in the sun. For that kind of a girl to come out and talk, it was the underdog story. It was also such a meaty part to do.

I think I would do better in the second season because I was grappling with the grammar of it. In films, we do 2-3 pages a day. 4 pages a day if you are in an Anurag Kashyap film. Inside Edge was 6-7 pages.

The graph was also very difficult because I am shooting episode 1 and episode 10 and 7 in the middle. It was a bit tricky. But I want to improve.

Apart from Jia Aur Jia, you will be seen in Fukrey Returns, which is another popular character...

Yeah, I love that. She is such a madass, empowered character. She, in her head, doesn't feel restricted as a woman, which is very rare.

She is out for revenge and really gonna get it. I love how Fukrey is coming together. I love two of my directors very much, though I ought to say I love all of them. But I love my Masaan director, Neeraj Ghaywan, and Mrigdeep (Fukrey Returns). They are just such clean sorted individuals.

After Fukrey, he could have gone on to make a multi-starrer film with some superstar. But he had this story and he wanted to tell it. Whether you believe in this story or not, whether it is up your alley or not, it takes a lot of conviction to stick to something as expensive as a film. It has just come together very nicely.

You ever worry if the mark set by the first film were too high. It is always a risk with the sequel?

There is the challenge, but I am confident because content is king. That's what works. There is a way to tell a clean story, make clean comedy, make people laugh, get kids into theatres on the holidays. That's what it is. That's why it was very successful.

There is this categorisation we have put up of having a 'multiplex' film that is all sex and drugs...then there is the flirty, item number type of film. This is something very different.