With this film, Mumbai Pune Mumbai becomes the first franchise in Marathi cinema to have a third part.

Director Satish Rajwade and Everest Entertainment have announced the third movie in the Mumbai Pune Mumbai franchise. Titled Mumbai Pune Mumbai 3, the film will take forward the story of the two characters played by Swwapnil Joshi and Mukta Barve.

Mumbai Pune Mumbai becomes the first franchise in Marathi cinema to have a third part.

Released in 2010, the first film saw the two characters Gautam and Gauri meet and fall in love. Mumbai Pune Mumbai 2: Lagnala Yaychach (2015), had the couple ready to tie the knot before they are tangled in issues. The makers have kept the story of the third part under the wraps. But the first poster of the film is out. It has Joshi and Barve in a romantic pose.

Speaking about the franchise, Rajwade said in an official statement, “While making the first film, we never imagined that the audience would love it so much. MPM (Mumbai Pune Mumbai) is considered as a cult film now and it started a trend of love stories in Marathi. The audience is now excited to know what is happening in Gautam and Gauri’s life. This is because they feel it is their story.”

Apparently, the director had thought of the third part while he was making the second. “During the making of the second part, we thought that a third part can be a possibility. We can’t say anything about the story of the third part. But we can assure that the audience will like the film just like the first two parts,” he added. 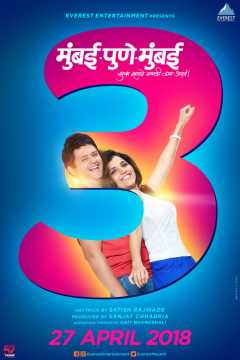