30 years of Nayakan: Kamal Haasan and Mani Ratnam's own 'child'


Of all the inspired clones of Francis Ford Coppola's Godfather, Mani Ratnam's Nayakan (1987) remains the most captivating. On the 30th anniversary of its release (21 October), a look at the challenges that Mani Ratnam and his star, Kamal Haasan, overcame to make the film.

In 2005, Time magazine put out a list of 100 great films of all time. The list included four films from India — two by Guru Dutt (Pyaasa, 1957; Kaagaz Ke Phool, 1959), one by Satyajit Ray (Pather Panchali, 1955) and Mani Ratnam's Nayakan (1987). The Kamal Haasan magnum opus has since become the gold standard for films in Tamil, and Indian, cinema.

Nayakan's fame lies in its gritty, realistic portrayal of the rise and fall of a self-made man. He is a gangster to many, saviour to others, and a flawed, broken man himself. Inspired by Varadarajan Mudaliar, the Tamil don who ruled the Matunga-Dharavi-Antop Hill area of central Mumbai in the 1970s and 1980s, Mani Ratnam created a film that stood out for its cinematic, visual and story elements.

To begin with, Nayakan stands out for its dispassionate view of its protagonist. The iconic question posed by the child in the film's climax, 'Are you a good man or a bad man?' is answered with "I don't know." It is the theme of Mani Ratnam's ideology that sought to neither praise nor malign Velu Nayakan.

In the book, Conversations with Mani Ratnam, by noted film critic Baradwaj Rangan, the director admits being drawn to Varadarajan Mudaliar for that very reason. He says, "The two years I studied in Bombay (1975–77), he was at his peak. People in the Matunga belt thought he was god. I used to wonder how anyone could treat a fellow human as god. I never understood why they would do this. It fascinated me. It was such a dramatic story, this man going from Tamil Nadu to Bombay and ruling the city."

But the film was almost never made. It was the passion of Kamal Haasan and the determination of Mani Ratnam, combined with a coincidental assembly of talents, that made the film possible. In an article in the newspaper, The Hindu (20 October 2012), Kamal Haasan revealed that it was at his insistence that producer Muktha Srinivasan of Muktha Arts decided to finance the film.

However, Srinivasan had a tight budget. Kamal Haasan recalled, "When Mr Srinivasan heard that we wanted to shoot in Bombay, he wasn’t happy. He just wanted us to make a film — any film — that would net him a profit of Rs5 lakh. That is how he was used to working. Films were a business. He wasn’t interested in films as art."

In fact, the producer had approached Mani Ratnam for a very different film. As the director revealed in Baradwaj Rangan's book, "Muktha Srinivasan came home and said dramatically, ‘Kizhakku endha pakkam? [Which way is east?]' He made me stand in that direction and gave me an envelope. I thought it was money — an advance, maybe — but it was actually a video cassette of a Hindi film. He said Kamal wanted me to see the film. I was not interested in a remake, but the producer insisted I see the film. Though a cheque would have been more appreciated than a cassette, I said I would see it. I put the tape in. It was about Shammi Kapoor in a nuthouse [Pagla Kahin Ka (1970)]. I couldn’t bear it. I was very sure I wasn’t interested." 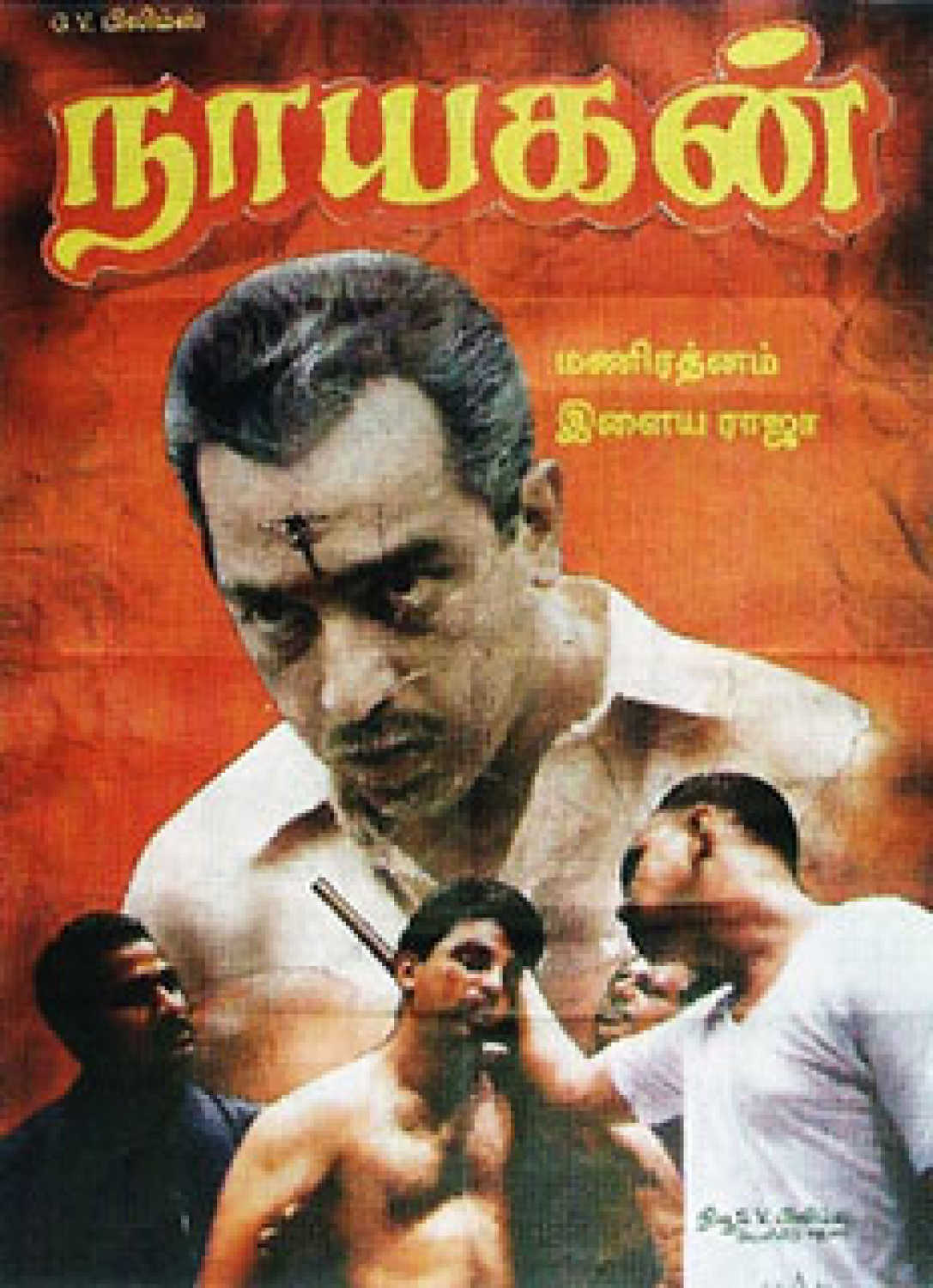 It was Mani Ratnam's decision to tell Kamal Haasan personally of his dislike for the Shammi Kapoor film that led to the two talking about the first draft of Nayakan. Soon, Kamal Haasan was convincing Srinivasan about the new idea, and the film came into being. However, the producer was still not too keen on spending for the epic scale that Ratnam visualized for his film.

The two persisted by borrowing props from the actor's other films, and sometimes persuading the producer to shell out some more money. In fact, Mani Ratnam admits that were it not for the multiple talents of Kamal Haasan, he would have had more difficulty making the film. "Apart from his ability to emote so well, he is a master of technique," the filmmaker told Rangan. "He did quite a bit of the make-up for the other actors in the film. If I had someone with a wound that didn’t look right, I would go to him and ask him to fix it. He would sit with the actor and get it done, and by that time I would have finished all the other shots I had to do. He was really a part of the team that way. We could ask him for anything we wanted for anybody else and he would do it."

There were moments that could have provided a fatal blow to the film. At one point, during the shooting of the pivotal moment when Velu Nayakan faces his son's burnt corpse, the shooting unit ran out of film. The production house refused to supply any more raw stock, as it used to be called, to make the unit ''shoot responsibly".

Kamal Haasan has described the moment as akin to "my child dying". He said, "When the time came, Mani was standing there glumly, and [cinematographer PC] Sreeram was sitting with his head in his hands. I thought there was a technical glitch. I said, 'What is the problem? I’m ready. Let’s go.' He showed me a small note from the producer saying the day’s quota of film stock had been used up, and they would have to wait till he sanctioned new stock. This was the producer’s way of making sure we shot 'responsibly', without going overboard with takes. I was livid. I called my office and asked them to bring the film stock they had in 20 minutes, and in those 20 minutes I was ready to cry."

The film went on to win National awards for Best Actor (Kamal Haasan), Best Cinematography (PC Sreeram) and Best Art Direction (Thotta Tharani). It was India's official submission to the 60th Academy Awards. It launched Mani Ratnam on the national platform, from being an up and coming Tamil director. Thirty years later, it remains the last film Kamal Haasan and Mani Ratnam worked on together.

As Kamal Haasan described the experience in his article for The Hindu, "We stumbled a lot while making this film. But Mani just got up and dusted himself off and went on to the next thing. He kept his cool. He was tethered throughout the shoot. He withstood storms. And he was not afraid to surround himself with strong contributors like the writer Balakumaran, whose ease with the local syntax and dialect helped to compensate for Mani’s urbanity. There were no egos on the set."

The actor also said, "Nayakan was one of the films — along with the films I have done with Balu Mahendra, K Vishwanath and, of course, my guru K Balachander — that made me decide that I should not be doing short-lived masala movies anymore."

It is hard to surmise if the actor would be as respected and admired for his conviction today if it were not for this choice.

Mani Ratnam himself considers the film one of his finest works. He described it in a conversation with Rangan thus: "With the time and effort you invest in each project, you expect that each one will work. It’s not that in Nayakan I was going out of the way and doing something extraordinary. It’s just that it’s such a pleasure when there is an actor who delivers more than you can imagine."

Apart from the duo, the film had a heady cocktail of talent including Sreeram, the set designer Thotta Tharani, and Ilayaraja, the music maestro, making it a rare moment.

While Tamil cinema has moved on by leaps and bounds, there is no denying that it was the seminal moment of Nayakan's conception that transformed Mani Ratnam and Kamal Haasan into two cornerstones of Tamil and Indian cinema.

As for why the two talented stars never worked together again, Kamal Haasan wrote, "I am always asked when Mani and I will work together again. I don’t know if we can summon up that same feeling of doing a film for the pleasure. Now there is too much pressure. And I don’t blame Mani. He has been so tormented by producers that now he wants to make films exactly the way he wants."

In an age defined by box-office success and revenue, it is hard to see if Mani Ratnam and Kamal Haasan could combine again to create another momentous film that changes the course of cinema. But then, they have already done that. The responsibility now belongs to a new generation of filmmakers and artistes.