On the screenwriter and director’s 58th death anniversary, we examine the legacy of the great man with help from his great-grandson Joyojeet Pal.

Niranjan Pal, son of freedom fighter Bipin Chandra Pal, became known as a screenwriter for the nascent Hindi film industry transitioning from the silent to the talkie era. The multi-faceted man, born on 17 August 1889 in Calcutta, was what director Shyam Benegal called in the documentary, Niranjan Pal: The Forgotten Legend, "an early entrepreneur in films and probably one of the Indian exports to Britain as a filmmaker”.

As a teenager, Niranjan Pal was sent away to Britain by his father. Pal’s great-grandson Joyojeet, assistant professor of information at the University of Michigan, United States, told Cinestaan.com in an e-mail that the young man was sent away for his safety. Joyojeet Pal wrote, “There was to be a warrant out on him for sedition, since he had stolen one of the weapons that was eventually used in the Alipore bomb case in 1908. Since his father Bipin Chandra Pal was himself quite connected in the political world, he knew that the police would come for his son, and in those days sedition laws only applied in British India, not in Britain itself, ironically.”

Bipin Chandra Pal hoped his son would study medicine, but Niranjan left that and continued his revolutionary ways. Niranjan was a regular visitor at a student residence in London which was famously known as India House.

“He started spending his time at India House with [Vinayak Damodar] Savarkar and [Madan Lal] Dhingra. He was a reasonably gifted writer, and among the things he helped write were the note read out by Madan Lal Dhingra at his trial for the assassination of Curzon Wylie. He started working in the arts only after Savarkar's detention and return to India, at which point a number of the India House activities died down. He was eventually introduced to the writing circle by WT Stead [a newspaper editor],” Joyojeet said.

Niranjan Pal met talents like George Bernard Shaw and became interested in theatre. He joined the Indian Art and Dramatic Society and wrote The Light Of Asia, an adaptation of Sir Edwin Arnold’s poem on the life of the Buddha. It had a few performances at the Royal Court Theatre in February 1912. He also began writing screenplays for British studios but was turned down repeatedly.

Eventually, he learnt the inner makings of a film at the Natural Colour Kinematograph Company and, later, became a documentarian with A Day In An Indian Military Depot (1916), the first of Indian origin to do so in Britain. Two of his scripts, The Faith Of A Child (1915) and The Vengeance Of Allah (1915), were made into feature films.

In the same documentary, the late film archivist PK Nair stated, “Till he made Light Of Asia, his work before that nobody in India knew.” Films like Shiraz (1926), restored recently by the British Film Institute, and Prapancha Pash, aka A Throw Of Dice, (1926), written by Niranjan Pal followed.

Niranjan Pal married an Englishwoman, Lily Bell, and Joyojeet Pal mentions that he recounted his experience of “being called Blackie by neighbours”. The actress Devika Rani stayed with Pal, his wife, and young son Colin, and was introduced to Himanshu Rai by Niranjan. The two lead artistes later married in 1929.

With Himanshu Rai and Devika Rani, Pal created what The Times of India newspaper later described as "Indian in story and content but British in technique". But as an Indian playwright he did come up against roadblocks about what he could write on.

Joyojeet elaborated, “He did face racism as a playwright — initially he wrote on India-centric subjects, which were relatively more accepted. But not a lot of people knew he was Indian [or native, as they called them], since he signed his name as N Pal, and people did not immediately understand that to be an Indian name, so he enjoyed significant success on the West End. It was only after his first play on London working class life that he was attacked for his race since it was seen as audacious for a native to be writing about the lives of Londoners.”

The trio of Himanshu Rai, Devika Rani and Niranjan Pal helped found the Bombay Talkies studio in Malad, then a village outside the Bombay municipal limits, in 1934. It was Niranjan’s stories and screenplays that made the first tangible connection with Indian audiences.

In his e-mail, Joyojeet Pal explained, “There were roughly two strands of inspiration that were common to his writing — first, he disliked the British portrayals of India, and felt that Indians needed to write their own stories rather than exoticized and often demeaning versions of India by colonizers. These themes are very visible in Light Of Asia, Throw Of Dice, Shiraz, etc.

"Second, his films with Bombay Talkies are a different set of inspirations, that drew from his own experience of living abroad in what he thought was a more egalitarian society. Thus he was offended by the Indian class/caste system, the strict gender norms, etc and a lot of his scripts focus on those topics.

"Of course, today these films are quite dated and we may not see them as emancipatory, but at the time that he was writing these scripts, the majority of Indian films were either mythologicals or action capers. In that sense, what Bombay Talkies did in terms of narrative subjects was arguably path-breaking.”

Niranjan Pal wrote seven features for the studio, many of them quite successful. Beginning with Jawani Ki Hawa (1935) to Jeevan Prabhat (1937), he and the studio had many triumphs, one of them being Achhut Kanya (1936), starring Devika Rani and a newcomer called Ashok Kumar.

In the book, Franz Osten and The Bombay Talkies, Niranjan Pal’s son Colin talked about his partnership with the German director. “Those days, scripts were written in minute detail. They also had detailed shot divisions. In his scripts, my father would write the idea of songs in English. As was the practice, the song was translated into Hindi.” Colin Pal said the script was the filmmaker's guide and no changes were allowed during filming.

Interestingly, Niranjan Pal didn’t like the title of the studio’s most famous film. It was based on his story The Level Crossing and he couldn’t find an exact translation for the title. The title was given by others.

After Jeevan Prabhat (1937), Niranjan Pal had a tiff with Himanshu Rai and parted ways with the studio. Rai tried to get him back, but Pal went to Calcutta to join Aurora Films.

He unsuccessfully turned director with a few films like Chitthi (1941). The 1969 film Jyoti, starring Sanjeev Kumar, was penned by him and released after his death on 9 November 1959. 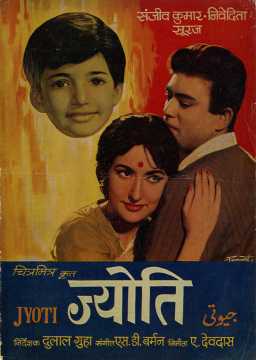 Asked how he would like his great-grandfather to be remembered, Joyojeet Pal responded, “I'm pretty sure he was an atheist so wouldn't care much about whether anyone remembered him, but even though he may not be a popular name in the public, he was very well regarded within the industry, and doors would always open for us in the film fraternity because of being related to him.

"There is practically nobody in the early post-Independence screenplay-writing world who had not worked with him. The San Francisco Silent Film Festival did an entire special event on him in the early 2000s, the BBC did a show on him, and the British Film Institute funded a project documenting his life and work, so I guess he has had some recognition, at least outside India.

"For what it's worth, even now if I find myself among a group of film historians of Indian cinema, someone will offer to buy me a drink, or throw it at my face, for being related to Niranjan Pal.”

As Joyojeet Pal rightly pointed out, when the film credits went up, Niranjan Pal’s name came first before the director or the producer. The artist in him was always trying something new and he had a tough life financially and did not just rest on his laurels. But most importantly, Joyojeet Pal said, “He lived a full life and did the things he wanted to.”