40 years of Inkaar: How Usha Mangeshkar helped Majrooh Sultanpuri on the song ‘Mungada’


The voice behind Hindi cinema’s most famous 'item' song takes us down memory lane, recalling how the song was shaped during recording and basking in its incredible popularity four decades on.

In the thriller Inkaar (1977), director Raj N Sippy’s directorial debut, Vinod Khanna is paired with Vidya Sinha. Khanna played a police detective, Amarnath Gill, who helps to crack a kidnapping-for-ransom case for the wealthy businessman Haridas Chaudhary (Dr Shreeram Lagoo). The young son of Haridas Chaudhary's servant has been mistakenly kidnapped and Gill helps to bring him back. Haridas’s sister Geeta (Sinha) is in love with Gill, but he has been deemed unsuitable by her elder brother. 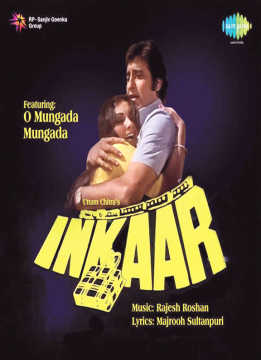 More than the film and its plot inspired by Akira Kurosawa's High And Low (1963), which in turn was loosely based on the 1959 novel King's Ransom by Ed McBain, the song ‘O Mungada Mungada’, composed by Rajesh Roshan, took on a life of its own.

The popular 'item' song was picturized on Helen and sung by Usha Mangeshkar, younger sister of playback singing legends Lata Mangeshkar and Asha Bhosle. Cinestaan.com spoke to the veteran singer about the landmark anniversary and how she helped writer Majrooh Sultanpuri with Marathi words for the song.

It wasn’t the first time that Usha Mangeshkar had sung for composer Rajesh Roshan. She had a duet with sister Asha Bhosle in the superhit Julie (1975) for him and also sang for other films like Khatta Meetha (1978) and Hamari Bahu Alka (1982) for which he scored the music.

She said, “I knew him from before, he’s [music composer] Roshan’s son. I have seen him since he was a little boy and our relations are good. For this film, he had a Marathi tune. In fact, Helen is also wearing [a Koli fisherwoman's] outfit in the song. Uss type ka gaana tha, iss liye unhone mujhe bulaya [It was that type of song, that’s why he sent for me].”

The thing that stood out with this number, Mangeshkar noted, was that it was “a Marathi tune with a good rhythm and setup, but the words were incomprehensible to the Hindi-speaking public. The song’s first word is ‘Mungada’. Mungada matlab cheeta, badi cheeti. [Mungada means a big ant].”

When the song was being recorded at Mehboob Studios, Majrooh Sultanpuri was present. Mangeshkar recalled that he came over and asked, “Usha, what do you call a big ant in Marathi?” She replied, “A big ant is called mungada.”

Sultanpuri said it would fit nicely in the song and put it in. She remembered, “Kissi ko samajh mein nahi aa raha tha ke mungada kya cheez hai [Nobody could understand what was ‘a mungada’]. It’s a completely Marathi word.”

After the song was recorded and filmed, the film was released on 9 November 1977. In its first week, it began to do well. Mangeshkar said that even Helen called up to tell her that the song was good. “Uska naseeb achha tha, woh chal pada [Its fate was good, so it did well],” she said simply.

But still Rajesh Roshan told her that many in the audience weren’t comprehending the lyrics. “What have you sung?” he said. And she pointed to Majrooh's lyrics, including the Marathi words in lines like ‘Kaisa mulga hai re sharmila tujhse to mulgi bhali [What a diffident guy, shyer than a girl]’.

It was so much of a problem that the song had to be re-recorded. Mangeshkar recalled, “After the film’s release, Rajesh Roshan told me that I would have to sing it again. I wondered, the film has been released, the song is well liked and I should re-record it? I said I will sing it again, and the problem will persist, so think about it. He said, I have thought about it.”

Even if listeners did not understand the words, they still enjoyed the song. Mangeshkar recounted the hilarious incident of a listener misunderstanding the meaning altogether. “Somebody once asked me, “Mungada kis sharaab ka naam hai [What kind of alcohol is Mungada]?”, because it has been picturized at a country liquor bar. I said, “Koi sharaab nahin hai, yeh toh mungada hai bechara [It’s not alcohol, it’s just a poor little ant],” she laughed.

Many years ago, she herself got the item number remixed and there was a video filmed with Kashmira Shah. But Mangeshkar admitted it didn’t work as people still liked the older version.

Even today, when she sings in stage shows, she gets requests for ‘O Mungada Mungada’. However, Mangeshkar says an artist never knows what is going to happen when they record a song.

“When it works, one thinks, oh wow, it’s really doing well. Like the songs of Jai Santoshi Maa (1975). No one knew that such a small film, that had a small budget, would rise above its class. It’s about fate or it’s made at the right time or it’s really good work. It’s always something,” she noted.

Mangeshkar travelled to North America in the late 1970s with her didi Lata for a series of stage shows. Initially, she said, “Didi ko stage pe achha nahin lagta tha. Maloom nahin kyun. Because there were so many great songs to sing on stage. But I used to say, this is my latest song."

Her fondest experience was singing the song there in front of an audience of 12,000 people. She remembers the overwhelming feedback even now. “The response [for ‘Mungada’] was always 'once more'. After that when I did shows in Mumbai, India, they wanted me to sing the song twice. They would invariably begin dancing, not just on stage but also at their seats. I still say, it’s not just boys, I have also seen older women dancing to it.”