With no stars, Dosti was close to my father's heart: Kamal Kumar Barjatya


On the film's 53rd anniversary, the Rajshri Productions managing director speaks about how the film came to be made, and its unusual release.

Friendship has been one of the favourite subjects in mainstream Hindi cinema. The film that commands top spot in this genre is the appropriately titled Dosti (1964). Produced by Rajshri Productions and directed by Satyen Bose, the film celebrates its 53rd anniversary today (it was released on 6 November 1964).

On the occasion, Kamal Kumar Barjatya, managing director of Rajshri Productions, got nostalgic about the film and shared some interesting anecdotes.

Tarachand Barjatya, Kamal Kumar's father and founder of Rajshri Productions, always wanted to make a film with newcomers. But he couldn’t do that with the production house's first film, Aarti (1962).

“For Aarti we had signed Sanjeev Kumar. At that time he was known as Hari Jariwala. But people advised my father that as this is his first production, he should go for top stars. Ultimately, we took Meena Kumari, Ashok Kumar and Pradeep Kumar. Sanjeev Kumar was dropped, which was very unfortunate,” said Kamal Kumar. 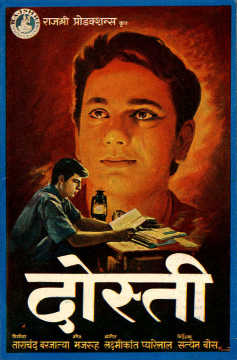 However, for the second feature Dosti, Tarachand Barjatya followed his heart. “Right from the beginning, my father wanted to make a film with no stars. So, Dosti being a non-star movie was close to his heart,” he said.

Dosti was a remake of an acclaimed Bengali film, Lalu Bhulu (1959). Tarachand Barjatya saw the original in Calcutta and was asked by its producer to remake it in Hindi. “When we had gone to Kolkata, Lalu Bhulu (1959) had just been released. It was produced by our friend Deepchandji Kakaria. He suggested to my father to adapt the film in Hindi. We saw the film with the public and liked it immensely. We bought the Hindi production rights,” Kamal Kumar said.

The choice of Satyen Bose as director was instant. “He [Tarachand Barjatya] said that the only director who can fit in is Satyen Bose. At that time, he had made Jagriti (1954). He readily agreed to make the film. It was made in a period of 2-3 months, actually,” revealed Kamal Kumar.

Asked whether they had expected the film to be such a big hit, he said, “Oh yes. We had very high expectations from the film. We received six Filmfare awards, including Best Film, in opposition to Raj Kapoor’s Sangam (1964). We got a National award (Best Feature Film in Hindi), too. It was also screened at the Moscow International Film Festival 1965 as the official Indian entry. My father especially kept a show for the MPs [members of Parliament] before the release,” he said.

Music played a big role in the film’s success. Its songs are still remembered, especially the title track, 'Meri Dosti Mera Pyaar'. “It had memorable music," said Kamal Kumar. "For Aarti we had Roshan as the music director. But for some reason, he couldn’t make it for Dosti. So, we selected Laxmikant-Pyarelal. Majrooh Sultanpuri, who was the lyricist, was at the top then. It became a good combination,” he said. “After Dosti, Laxmikant-Pyarelal shot to the top.”

Kamal Kumar also recalled another film based on the same theme. “I remember a film was made on the same idea with grown-up artistes. One of them was Anil Dhawan. But it didn’t work,” he said.

The veteran producer also shared an interesting anecdote on the film's advance booking. “It had a very wide all-India release with more than 90 prints," he said. "It was an extraordinary number in those days. When the advance booking was opened, I remember getting a call from Mr Ramraj Nahata, editor of Film Information [a film trade magazine]. He congratulated us and said the advance booking queue outside Naaz cinema [a landmark at Girgaum in south Mumbai] has come up to his office [at Lamington Road]. The theatre was inside the lane and his office was on the main road.”