Others invited to write for the book include Ben Stiller, Ashton Kutcher, Maria Sharapova and Jimmy Fallon.

Richa Chadha might be known for her versatility in acting, but her inspirational stand on issues has earned her the respect of people across the world. Among them is entrepreneur Tim Ferriss. The entrepreneur has added Chadha's quotes as a chapter in his next book, Tribe of Mentors.

Ferriss is known for investing in two of the biggest social media ventures in recent times — Facebook and Twitter.

The book by Ferriss is a compilation of quotes and life lessons by people from various walks of life. These include names like Ben Stiller, Ashton Kutcher, Maria Sharapova and Jimmy Fallon, among others.

Incidentally, Ferriss chanced upon Chadha on noticing her presence on Twitter. The actress has taken some strong stands on issues through her social media accounts, and they seem to have worked in her favour. 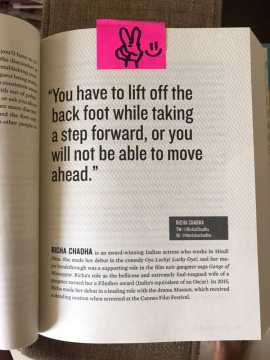 When asked Chadha about this opportunity, she said, "I naively thought what I say doesn’t matter at least online I shouldn’t take myself too seriously. But when I was asked to share my experience in this exciting book, I was over the moon. I couldn’t believe it at first. Tim Ferriss is a huge influence in the area of self-growth for us millennials.”