Brijesh Kakodker's Konkani film Tiffin Box was screened at the ongoing IFFI 2017. In a conversation with Cinestaan.com, the first time director talks about the effects of IFFI on Konkani cinema, his film, and more.

The Konkani Films section at the ongoing 48th edition of International Film Festival of India (IFFI) in Panaji, Goa has seen at least four short films made by locals being screened over 4 days. Juze, the Konkani feature, directed by Miransha Naik, was selected for the Indian Panorama section.

Mahaprayan by Nilesh Karamunge, Zuzari by Mandar Talauliker, Marisol 1998 by Suyash Kamat and Tiffin Box by Brijesh Kakodker had early morning slots at Maquinez Place I and all of them saw a good turnout of locals, many of whom were family and friends of the first-time filmmakers.

Tiffin Box is the tale of Caitu (played by John D’silva) who is under the control of brute Dadu Sheth (Rajeev Hede). Indebted to his boss, Caitu is treated no less than a slave.

With repeated shots, Kakodker highlights Caitu’s early morning routine of delivering milk and picking up a tiffin box from the village temple priest’s porch. He longs to break away from this vicious cycle, but his debts would probably kill him if Dadu Sheth didn’t.

On a chance discovery, Caitu finds out that a lot of money is being transported in the tiffin box he delivers to Dadu Sheth. Caitu’s circumstances play tricks on his mind, and he is tempted to run away with the money. But conscience takes the upper hand and Caitu decides against it. As fate would have it, Caitu finds a way to expose the temple priest and Dadu Sheth, and most importantly is emancipated from his taxing circumstances.

IFFI 2017: If you are a good actor, a passport-size photo is enough, says Mukesh Chhabra

Director Kakodker's traditional Goan instrumental music and sounds add a touch of humour, something we usually see in tiatrs, a musical theatre popular in the state of Goa.

He plays to the strength of a tiatrist protagonist without going overboard or overacting like they do in Konkani theatre. D’Silva is required to give a subdued performance, unlike his comedic tiatr persona, and he passes with flying colours. For a runtime of 26 minutes, Tiffin Box succeeds in telling a local and fresh story of redemption.

IFFI 2017: Bhumi Pednekar recalls when women in Hindi films had no profession

Cinestaan.com caught up with actor-director Kakodker, who has acted in seven Konkani feature films himself, at the ongoing 48th International Film Festival of India (IFFI) 2017 in Panaji, Goa. Kakodker had a blink-and-miss appearance in Hindi film Dear Zindagi (2016) and has directed short films for projects and competitions. Tiffin Box, which was screened as part of the Konkani Films section at IFFI 2017, is his first directorial venture.

Was it a conscious decision to direct your first film in Konkani?

There are only 1.5 million people in the world who speak the Konkani language. Sadly, it is a dying language. Day by day the use of it is diminishing. For me, Konkani is like a spy language. You could converse with another Goan from any part of the world and a third person wouldn’t have a clue about what you are talking. Konkani is a very earthen language, it’s not polished. It’s got that roughness.

You use two dialects of Konkani in Tiffin Box...

Yes, one is the Hindu dialect and the other is the Catholics’ Salcette dialect. The blend was very interesting as the story is set in a village.

John D’Silva is a renowned tiatr (Konkani theatre) artiste. Why did you choose him to be Caitu? 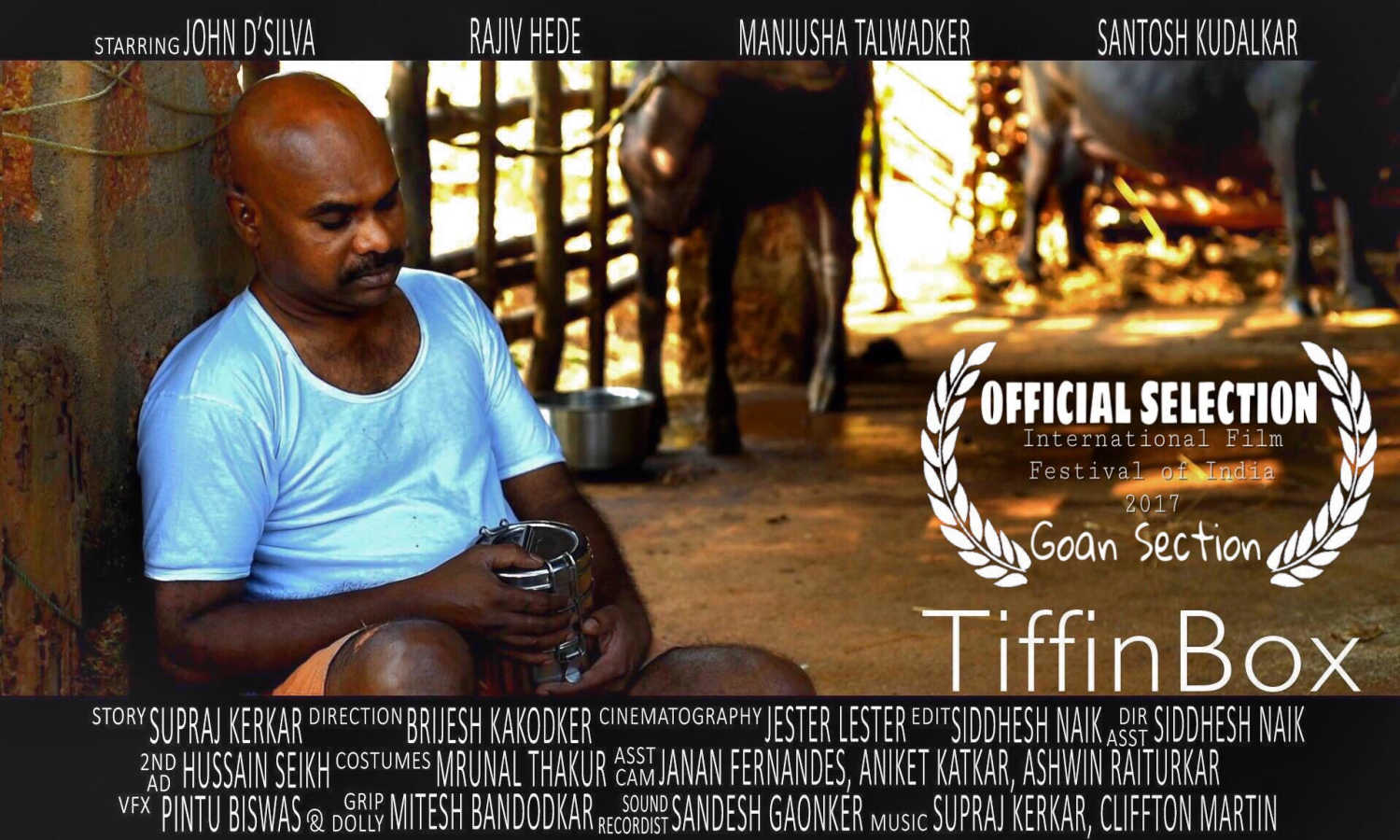 He’s a celebrity in the tiatr world. He’s been in the field for many years now. He’s our superstar. When the writer-producer Supraj Kerkar wrote the film, he pictured John as Caitu. Right from the start he had it in his mind to cast John. I have seen John’s work, but never got a chance to act with him. I have always been fascinated by his work. He has an image of being a comedian, he doesn’t do serious roles or anything that needs him to be subtle. I wanted to show him in a different light here.

He’s not the hero, he’s just a simple person. He has had a miserable life and now he is stuck in this daily loop. He does the same thing everyday. I am satisfied by the way John pulled it off.

What about Rajeev Hede who plays Dadu Sheth?

He is also from Konkani theatre. Both these actors came together and worked out a scene, it was really incredible. If you notice, our film doesn’t have many cuts in it. It’s basically one take where the camera moves and actors do the movement. We took that decision because both actors are from the tiatr background, so you give them space and they get it done.

Talking about cuts, during the screening there were some stoppages. Was that part of your treatment or just technical glitches?

It was a technical issue at the screening which broke the flow of our film. I am not taking responsibility for it, because it is not our fault.

Will you be taking it up with IFFI or the Entertainment Society of Goa?

The best thing I can do is talk about it in the media. If I go and argue with them, they will not take me that seriously. When the word goes out through the media, it will make an impression.

Tell me more about your previous films as an actor.

I did seven films in total, of which, one is still in production. I feel glad to tell you that this is the third time that a film I am associated with has come to IFFI.

The first two times it was films in which I was acting — In Search of Mother (2014) and Hanv Tum Tum Hanv (2015) — both directed by Ramprasad Adpaikar. And this time my first film as a director got selected to be screened at IFFI 2017.

Do you think because of IFFI a lot more Goans are taking interest in the art of filmmaking?

Definitely! I remember a decade ago, hardly any films were being made. We have had glorious Konkani cinema way back in the start. I can proudly say that when the first Konkani feature Mogacho Anvddo was made in 1950, the poster for it was seen at Marine Drive in the then Bombay. Imagine having that space for a Konkani film is a big deal.

Those were the glory days and later it slacked badly. Now because of IFFI we are being exposed to good cinema and a culture of film watching, making and appreciating is being developed. I feel very proud that every year we have at least one Konkani film being selected in the Indian Panorama section at IFFI. This year it was Juze. So yes, good days for Konkani cinema are here.

I was talking to Juze director Miransha Naik, and he said that it’s not just the festival that gives you access to films. He said you need to seek out other ways to watch what you want. Do you have inspirations in world or Indian cinema?

As a kid, I watched a lot of films. Sadly, I don’t much of Bollywood (Hindi cinema). But on the international level I have a few favourite directors. One director who inspires me is Stanley Kubrick. I love the way he handles a subject. That guy knows how to tell a story.

Growing up, Steven Spielberg has been someone I look up to. He just raises the bar. Two days ago, I watched Russian film Loveless directed by Andrey Zvyagintsev. I am fascinated by his film. Then there’s South Korean filmmaker Kim Ki-duk, Iranian filmmaker Majid Majidi, who are quite inspiring. Though I wasn’t very happy with Beyond The Clouds which was the opening film at IFFI this year.

It just felt like a Bollywood film without songs. It’s just my opinion. When they make a film about India it’s always a sad story, a tragic happening. In world cinema, people are poor but they are having their good times. They are not depressed all the time.