IFFI 2017: Majid Majidi to make next film also in India, reveals Beyond The Clouds producer


The filmmaker spoke for fresh talent, pointing out that in a country where cinema is an industry, newcomers would struggle to follow their vision.

The cast, director and producers of Beyond The Clouds, which opened the 48th International Film Festival of India in Goa, sat down for a discussion with the media a day after the film's screening.

The film was screened at two venues yesterday (one, a by-invitation-only event). Winding queues were seen at the venue that was open to the public, with hundreds of fans left dejected as the cinema hall filled up.

Director Majid Majidi and artistes Ishaan Khattar and Malavika Mohanan were accompanied by producers Shareen Mantri and Kishor Arora of Namah Pictures and Sujay Kutty of Zee Studios. During the interaction, Mantri revealed that Majidi would be making his next film also in India, but he refused to give any details.

Before the question-answer session began, Majidi said he saluted everybody from his Indian crew and cast for Beyond The Clouds. “It was a pleasure to work here," the Iranian said. "I chose my technicians from India. And I hope we can have a good discussion today.” 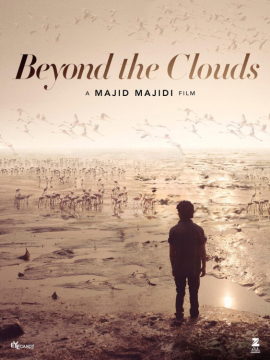 Praising Mehta, the director revealed that they visited all the locations before the shooting began. “As you have seen in my film, locations have character," he said. "In the beginning, we are exploring the city. For the lighting we tried to have a real sequence of the set. Anil has done his best work."

Answering a question by Cinestaan.com about working with newcomers, Majidi said, “If you have seen my previous films, you will have seen that I choose my characters from among common people. I love introducing new faces in my films as I like to convey the real feelings of the common people through my work.”

He also shared an anecdote about the difficulty of organizing a set when a star is on it. He remembered an audition with actress Deepika Padukone, currently in the eye of a storm over Padmavati, when the crew had difficulty managing the crowds that turned up to see her.

Khattar, who makes his debut with Beyond The Clouds, apologized for reaching late owing to a motorbike breakdown. “I am a big fan of cinema, I watch a lot of films," the young man, half-brother of Shahid Kapoor, who also stars in Padmavati, said. "I have even come here to IFFI for a few years. Working with Mr Majidi was a no-brainer. It was an incredible team to work with."

Khattar said he was not driven to do what he called star movies. "It's about doing cinema which I love and a story which requires to be told." He will be seen next in Dhadak, a remake of the sleeper-hit Marathi film Sairat (2016).

Malavika echoed Khattar’s views, saying it wasn’t a conscious decision to work with Majidi and that it was a learning experience. “When you get a precious opportunity like that, you just do it and give your best," she said.

Malavika added that there was pressure and she had her moments of self-doubt when she thought, ‘what if you don’t deliver’. “But Majidi sir is such that he extracts the best from you. He has a process and at the end of the process, sometimes after a shot I would go back and think to myself that I didn’t know I had it in me to do that as an actor,” she said.

The filmmaker spoke in Persian, while his executive producer Reza Tashakkori joked about the difficulty of translating Majidi, who sat with his prayer beads, unfazed by the media and attention from fans keen to learn about his work.

Speaking about his writing process, Majidi said he could not start writing until he was clear about his story and the characters. “When I am so close to the subject that I can feel it, then I put it in my story,” he said.

Before Beyond the Clouds, AR Rahman had composed the musical score for Majidi’s controversial 2015 film, Muhammad: The Messenger Of God. Talking about Rahman, Majidi said, “He is a special man. One of the good points about AR Rahman is that he is very flexible. The biggest challenge working with him is that he works from night to morning. I would be going to sleep, and suddenly he would call saying, ‘Come and listen to this’.”

Majidi took the opportunity to urge the media to promote fresh talent. “In a country where you have cinema as an industry, it is difficult for youngsters to follow their vision," he said. "They do not get a chance to express themselves. I am not against Bollywood cinema [as Hindi cinema is sometimes known], as they have their own way and they continue in that way. We should help youngsters and brilliant talent to work and express themselves.”