The musical night, held in collaboration with Klub Nostalgia, commemorated the music composer’s 100th birth anniversary through his hit songs and long career.

Besides Anand and Milind, Chitragupta's daughter, Sudha, and other family members were also present to celebrate the birth centenary.

Besides, the concert chronicled Chitragupta’s career, referring to the composer as a “private, reserved person who let his songs do the talking.” Which they successfully emulated too, with singers crooning his top hits from films like Bhabhi (1957), Ek Raaz (1963), Oonche Log (1965), Vaasna (1968) and others.

Many Mohammed Rafi solos and duets found their way to the concert, as it was noted that both Rafi and Chitragupta were strikingly similar; like two sides of the same coin.

Milind also announced that their former residence — Prabhat building on 14th road, Khar, Mumbai — will have a chowk named after their father. The building was, interestingly, formerly occupied by music director Madan Mohan and his family.

The night would not have been complete without Anand-Milind essaying their famous ode to fathers, ‘Papa Kehte Hai’ from Qayamat Se Qayamat Tak (1988). They dedicated it to their father, saying that was what he used to think about his sons.

Udit Narayan, who shot to fame with the song, crooned the popular number from Mansoor Khan’s film, much to the delight of the audience. The icing on the cake was Anand and Milind joining Narayan for the performance. 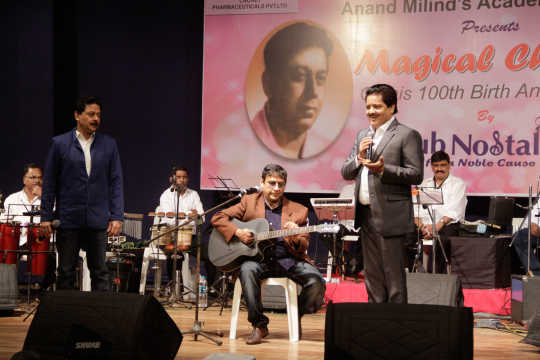 Narayan also revealed that when he arrived in Mumbai looking for playback singing opportunities, it was Chitragupta who gave him chances to sing duets with Asha Bhonsle in Bhojpuri films.

Later, Chitragupta’s sons gave Narayan five songs on the Qayamat Se Qayamat Tak soundtrack. Narayan concluded his tribute by thanking Chitragupta for giving him the same kind of love he extended to his own sons.

The personalities of the Hindi music world all feted Chitragupta. Ameen Sayani brought back his famous line, ‘Beheno aur bhaiyo’ from his radio days to the applause of the audience. The 84-year-old said he remembers his old friend Chitragupta as a sweet, lovable, shy and an educated man. “If you remember, whenever his name came, Chitragupta MA was written,” Sayani said.

Lyricist Sameer Anjaan compared Chitragupta to the great banyan tree whose roots are still visible today, referring to the talents the composer supported over the years, from Narayan to Sadhana Sargam, from Alka Yagnik to himself. Sameer also wrote several songs for Chitragupta in Bhojpuri cinema.

Sadhana Sargam also pitched in her voice, singing Chitragupta’s composition ‘Dil Ka Diya Jala Ke Gaya’ from Akashdeep (1965), originally sung by Lata Mangeshkar. She was joined onstage by Abhijeet Bhattacharya for a duet on ‘Chali Chali Re Patang’ from Bhabhi. The performance came to its peak when Narayan, Anand and Milind too joined the duo on stage to sing along.

Lata Mangeshkar, who was unable to attend the concert, sent an audio clip for Anand-Milind and the audience. She spoke about the close friendship she and her family (sisters Meena, Usha and brother Hridaynath) shared with the composer and recalled funny moments.

Mangeshkar also talked about seeing his children grow up and how when Chitragupta once asked permission to come over her house, she had told him to think of it as his own house.

Sonu Nigam made a special appearance at the concert and shared his connection to Chitragupta.

He was 15 years old when he sang Mohammed Rafi’s ‘Chal Udd Jaa Paanchi’ from Bhabhi (1957). He put the audience in a trance with his rendition of the song. Nigam particularly thanked Anand–Milind and the members of Mohammed Rafi’s family also present at the show.