Maharani Padmini (1964): Once upon a time before Bhansali's Padmavati


While the furore over Sanjay Leela Bhansali's allegedly inaccurate depiction of Padmavati refuses to die down, we look at the epic that once unfolded on the big screen in Jashwant Jhaveri's Maharani Padmini (1964).

Still from Maharani Padmini
give your opinion

[The heart is in a tumultuous wrench at the sight / Of stones and bricks locked away and mongrels breathing free] (source: A Reader's Words)

To Faiz's locked stones and bricks, film lovers in India can add ideas, legends, mythologies and idols. The despicable threats levelled at director Sanjay Leela Bhansali and artistes Deepika Padukone and Ranveer Singh over their upcoming film, Padmavati, is a sign of the insecurity, lawlessness and superstition that grips India today.

The filmmaker and his team find themselves under siege, quite like the famed Rajputs of Chittor against the hordes of Delhi sultan Alauddin Khilji. It is indeed ironic that the behaviour of those who have surrounded the film and its maker claiming to protect Rajput pride would have made Khilji proud.

To begin with, who or what is Padmavati? Despite historians repeatedly pointing out that there is no historical basis to the queen's story, the controversy refuses to subside. Legend says rani Padmini (not Padmavati) was a beautiful queen of the kingdom of Chittor, ruled by rawal Ratan Singh in the 14th century. She first finds mention in the epic poem, Padmavat, written by the Sufi poet, Malik Muhammad Jayasi.

Jayasi's tale can be compared to Homer's Iliad, where the love for Helen of Troy, reputedly the most beautiful woman in the world, leads to the destruction of an entire kingdom. Where you read the Trojans, read the Rajputs of Chittor. Where you read Agamemnon, read Sultan Alauddin Khilji. It is a motif that has repeated itself in countless epics, including the Mahabharat, where an insult to Draupadi led to the armageddon that was Kurukshetra. 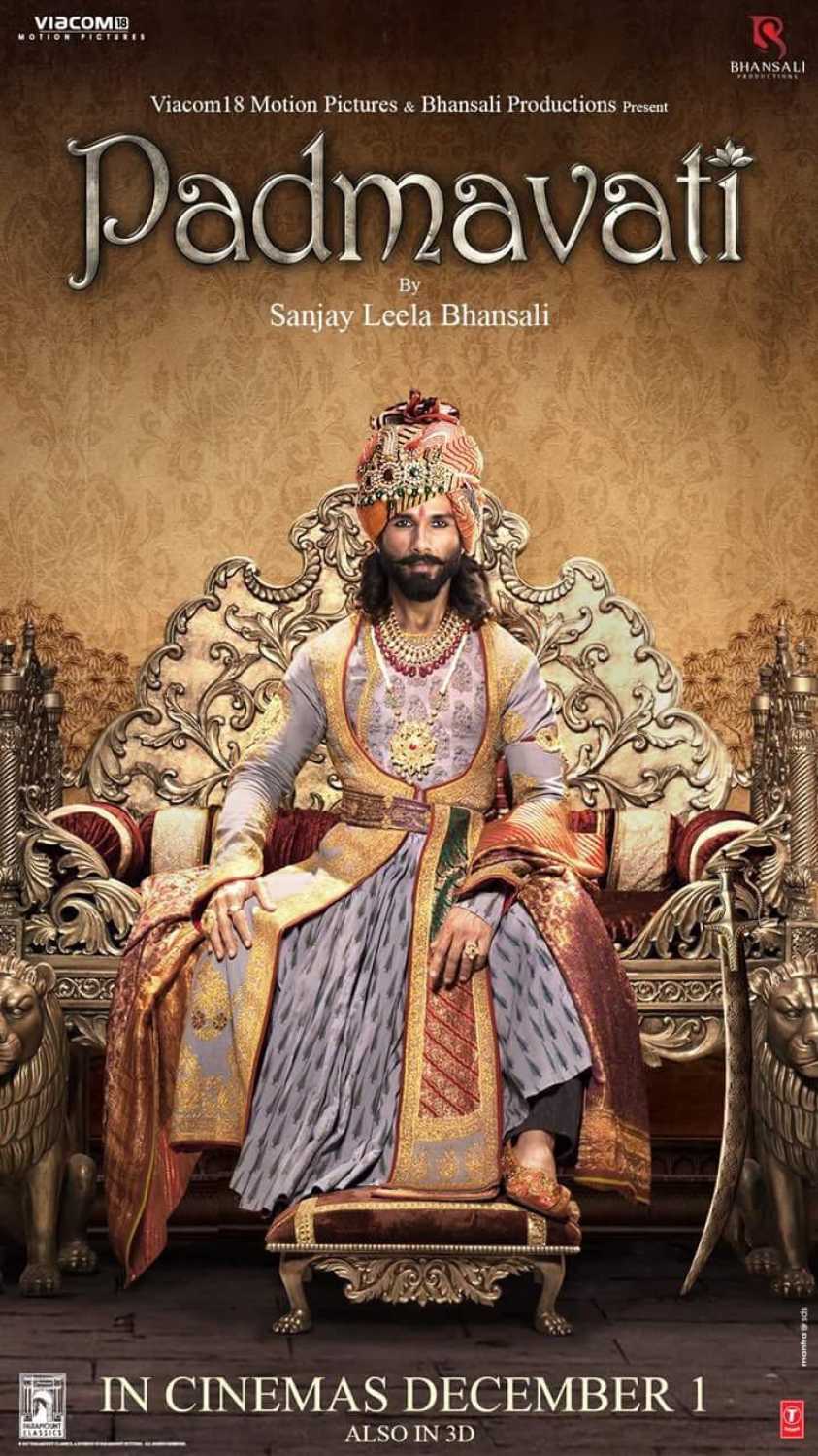 Jayasi's poem was first published, as records suggest, in 1540, more than two centuries after the supposed occurrence of the event. The epic poem traces Padmini's origins to Sinhaladweep (present-day Sri Lanka). There are sorcerers, talking parrots, envious generals and a whole lot of drama that make for a great read. However, the facts, which history is often based on, are not Jayasi's greatest strength.

The website thequint.com quoted historian Harbans Mukhia as saying that while Jayasi states that he is basing his story on the incidents of the date, it is more than two centuries after the death of Khilji in 1316. And the sultan had raided Chittor much earlier, in 1303.

As for the Rajput Karni Sena's argument of historicity, Hindi cinema has never really toed the line on it. Whether it was Mughal-e-Azam (1960) or Sohrab Modi's Sikandar (1941), it was drama that formed the crux of films. As for distortion, it is Khilji whose reputation needs to be carefully checked. For he was an actual historical figure, whereas the legend of Padmavati can neither be confirmed nor denied.

Since then, the legend of Padmini has been fortified through translations and repetitions in multiple languages. Like every bestseller, Jayasi's poem was followed by another poet Hemratan's Gora Badal Padmini Chaupal (1589). British historian James Todd included the story in his book Annals and Antiquities of Rajasthan, a compilation of fables from the erstwhile Rajput kingdoms.

By the time the Indian national movement arose, these legends were transformed into tales of sacrifice and valour against oppressive foreign rule. Sister Nivedita and Abanindranath Tagore, a nephew of Rabindranath, were also enamoured by the story. Tagore wrote Rajkahini, which focused on Padmini as a historical figure worthy of emulation, for schoolchildren.

Considering the nature of early Indian cinema, which borrowed from historical epics, it was natural that the legend would find a place on the big screen. Debaki Bose was the first to make a film on the story, in Kamonar Agun or Flames Of The Flesh (1930). The title itself should serve as an irritant to some of the bristling Karni Sena members.

The focus of this article, though, is Jashwant Jhaveri's Maharani Padmini (1964), because the film is the only accessible one from the past that documents the story in discussion. The film starred Jairaj as the brave Rajput rana Bhim Singh (not Ratan Singh), Anita Guha as Padmini, and Sajjan as Alauddin Khilji. Apart from these, the cast included the actress Shyama, who died recently, as the mallika (queen) of Khilji, and Jagdish Bhalla as the Iago-esque Malik Kafur.

The film begins with an introduction that clearly implies that the threat to the pride of Rajputs was no less in 1964 than it is today. The slide says in an apology, 'The history of a slave country is got (sic) written by its rulers. Thus, facts travel more convincingly to us through bards (sonnets) sung by singers and the incidents narrated by word of mouth. Therefore, relying upon aforesaid sources, we have bridged over certain prejudices of historical dictators and flattery by historians, so as to treat this subject purely on logical lines.'

The film begins in Delhi where Malik Kafur, Khilji's general, is hatching a plan to take over the throne. He does this by appealing to Khilji's aesthetic love of beauty. Using Qatlani, his lover and a courtesan, he creates a fable about the beauty, splendour and grace of the queen Padmini of Chittor which gets the sultan curious. However, the sultan is neither keen nor avaricious enough to march on Chittor just for this reason. It is only when, during the conquest of Gujarat, Kafur is denied permission to pass through Chittor that the sultan is forced to confront the Rajputs.

However, relations between the kingdoms remain friendly. Khilji is more angry at his general for taking on the king's voice. He berates him, saying, 'Now I have to face the wrath of two kingdoms instead of one.'

Nevertheless, he departs for a conquest of Chittor. Just as the film looks to be entering its first battle, it wanders into a denouement. Badal, the 10-year-old son of Gora Singh, the rana's general, decides to meet the sultan. Taught by rani Padmini about the valour of love in a wonderful scene, he kills 19 of the sultan's soldiers before perishing. In his dying breath, he tells Khilji to 'pick up a sword to protect, not destroy.' Touched, Khilji sends the boy off in a royal palanquin and decides to call for a truce.

Having paid respects to the boy at his funeral, Khilji and the rana invite each other for feasts. Dining with the sultan, Bhim Singh, in a drunken stupor, promises to let him take a look at Padmini. This is the first moment of conflict in the film.

Returning to his senses, the rana realizes his blunder. However, as a Rajput, he has no way to go back on his word. The infuriated Chittor council suggests that they allow the sultan to glimpse Padmini through a mirror. Thus arrives the moment that the Karni Sena claims is most damaging to their Rajput pride.

At first sight, Khilji is smitten by Padmini's beauty. However, he does not lose composure and returns to camp after wishing the rana and his queen a long life and youth. Again, it is Malik Kafur's machinations that convince the sultan to invite the rana and imprison him till Padmini accepts his overtures.

In Chittor, Padmini is faced with a rebellious Rajput clan led by Gora Singh. They blame her for insulting the 'Sisodiya' clan by showing her face to Khilji (though it was their idea in the first place), and now decide to ride out to meet Khilji to save the rana. However, Padmini prevails by declaring that the 1500 soldiers who would accompany her will save the king.

The rescue proves to be the catalyst Kafur needs to declare all-out war. By the time Khilji realizes his flaw and tries to stop the war, the rana, Kafur, and Padmini have perished. He sobs on the battlefield, saying, "The world will never forgive me for my flaws, and my conscience will never forgive my actions."

Jhaveri, who made several legendary epics like Alha Udal (1962), Jai Chitod (1961) and Amarsingh Rathaur (1956), layers the film with a Shakespearean ethos. His Khilji is not an evil emperor but is felled by his hubris. He is gentle, kind, even respectful. This is a far cry from Bhansali's Khilji, played by the exuberant Ranveer Singh, who wears fur and feasts like a bellicose Viking, is uncouth and lustful.

The rana in Maharani Padmini, on the other hand, comes across as a man who is insecure. His envy takes over when he suspects Padmini, as she arrives to rescue him. However, in the end, he is certain of the task he has taken in hand. This is not the flawless, great king that Bhansali seeks to portray. He is a man with flaws, but it only serves to enhance his human nature in the presence of beauty.

It is Padmini who remains firmly, as Helen of Troy does, at the centre of the drama. Played by Anita Guha, she is serene, brave and admirable. However, she is wanted by Khilji and blamed by Rajputs. At every point of the climax, she seems to be a woman fighting her own battle against patriarchy.

There are separate layers of characters like Qatlani and the poet, who writes poems that floor Khilji, and the brother-sister bonding between Khilji's queen and the rana that make for more interesting aspects of the drama. Even Helen (of Hindi cinema, not Troy) makes an appearance as a dancer in Khilji's court.

Historically, Jhaveri's film does little to convince you. But it is shot beautifully at the fort of Chittor. The acting fits in with the theme of epic costume drama and the dialogues are spoken in fluent Hindi and Urdu. With Mohammed Rafi providing the vocals, and DN Madhok and Sardar Malik bringing together the music, it is a fascinating watch.

Despite its presence as a credible drama, the comments section on the YouTube video should give an idea of the growing controversy. The top comment reads 'Movie Ka director Muslim hai aur ghatiya alluddin khilgi ko saitaan Ka sunkar galat kiya aisa banav dikhaya hai... [The director is a Muslim and has shown Khilji as being swayed by the devil, when it is not so]'. Jhaveri would certainly not have been pleased.

Jhaveri's film was released in the same year as Dosti, Sangam, Kashmir Ki Kali and Woh Kaun Thi? It was a different world and changing sensibilities that ensured his film passed into history without much furore. The absence of social media platforms that allow rabid fringe elements to erupt in violence also perhaps helped. Bhansali is not as fortunate. The director of Padmavati can, however, find comfort in the fact that he is not alone.