Irrfan Khan: I am finally getting the kind of work I wish to do


The versatile actor spoke about exploring light-hearted roles, the pressure of box office and the roles he has rejected in the past.

Actor Irrfan Khan has been a solid performer who has proven to be a specialist in playing serious and intense roles. But over the last few years, he has explored the light-hearted genre in films like Piku (2015) and Hindi Medium (2017). Not only did the films do well, but his performance was also appreciated. The actor will continue the funny streak with his upcoming film Qarib Qarib Singlle, which is also a comeback for director Tanuja Chandra.

In a friendly chat with Cinestaan.com, Khan spoke about exploring light-hearted roles, the pressure of box office and the roles he has rejected in the past.

Your films Piku (2015) and Hindi Medium (2017) did well and your work was appreciated. Now you have another light-hearted film (Qarib Qarib Singlle). So is this your conscious decision to keep doing light-hearted entertaining films in between?

Yaar, it all depends on what type of films keep coming to me. It is a co-incidence that I got two such stories one after the other. It became possible because people felt after Piku that I can even do romance. I am not such a big star who can say, I want to do these types of films, so bring such films to me. I choose from the films I am offered and I choose by instinct. I don’t have any system. I don’t have a formula to fit this and this so that it can do this much business. Business is never in your hands. You can never predict how much business a film would do. I don’t even want to explore it.

As your last film (Hindi Medium) became a big hit, is there pressure to deliver yet again at the box office? Are you excited or nervous? 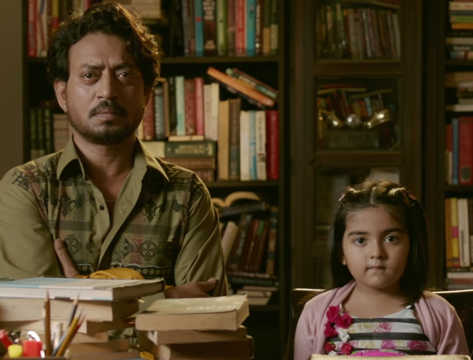 Expectations do arise. This is a part of the actor’s life. When the film releases you want to know how it will do at the box office. But one can’t tolerate that for long. Whether the result is good or bad, you have to come out of it in a day or two. Or else there arises a great deal of curiosity and anxiety, which doesn’t help. Whatever is going to happen with the film will happen. Whether I keep track of how much the film is making every hour or I don’t, it won’t matter in the end result. So, it is better that you disappear after the film’s release. You should find out after a week as to what happened with the film.

I am excited. Not nervous at all. You don’t get to do such romantic comedies again and again. The romance is the kind we saw during our childhood, where there is an old world charm. The characters are such that you can relate with. They are from today. So, I am excited to see how people find it.

Can you elaborate on this old-world charm aspect?

Old world charm is like what used to happen earlier, when you didn’t say ‘I love you’ so easily. When it used to take time for you to know each other. Just like it used to happen in earlier films where Raj Kumar used to say, ‘Aapke paon zameen pe mat rakhna. Maile ho jayenge.’ He hasn’t seen anything except her feet and he gets such feelings which he puts forth to her.

Initially when you were new, were you more keen on knowing how the film is doing?

It happens even now. But slowly you tend to understand that it doesn’t help. All that happens is that you get anxious and enter a weird mental state. For example, if you go somewhere for a holiday where there is no TV, just note down your mental condition there. But when you are at home and you switch on a news channel, you will experience anger after watching it for an hour. You would realize that news creates an anger within you. You have to choose whether to be in such a state or not. So, it’s better you leave it to God and others. Whatever will happen will happen.

How much does it affect you to play comical characters as opposed to playing intense roles?

Doing an intense role is surely taxing. It takes more of your energy. What happens with doing comedy is that you remain in the same playful mood. So, intense roles consume you more. You need to unwind, detox and refresh. But in comedy, you enjoy the time (of shooting). It doesn’t tax you.

Does that happen with dubbing too?

It happens all the more during dubbing. A lot of times you feel like not dubbing for an intense scene and keep it as it is. It is difficult at times.

Is there any genre you feel you haven’t tried and would like to?

I feel I haven’t done much and my journey is just beginning.

Why do you feel so despite doing so many films?

Have you ever wondered how to play a particular character?

I felt I wouldn’t be able to play Yogi (in Qarib Qarib Singlle). It is a role that astonishes you when you read. It used to come out of the page and was so amusing that I felt how would I do it. It was difficult for me to catch its tune. And there were a lot of chances that this character might become caricature-ish. There were full chances. A lot of time you wonder whether you would be able to carry this role.

Has it ever happened that a role that was rejected by you was done by someone else and you wondered how you would have done it?

There have been a lot of films that I have rejected and later on I felt good that I rejected them. Also, a lot of times I have rejected a film and it went on to become a hit. But I never feel that the film would have been a hit even if I had been in it. There are scripts that I rejected and they were accepted by some of our superstars and they became big hits. But I never had any such misunderstandings. I have my space, they have theirs.

Do you think you have reached a stage where in case your film doesn’t do well, you will still keep getting films?

My earlier films didn’t do well. But I kept getting work. I know that I am not the type of an actor whose journey will be decided by hits or flops. If people are telling stories, they will surely need me. And I am not fearful of me not getting work. Ever since the beginning I have always had work. My only concern is that whether I would be able to put across the stories to the audience.

Tanuja Chandra has come up with a film after more than a decade. How was your experience with her?

Actually, after reading her script, I felt that the films that she made before was one chapter of her life and she is starting a new chapter in her life with this film. Now she wants to make more personal and delicate films, where there are more relatable characters.

You have just been signed for a political satire by Amazon titled The Ministry. What is it about?

It’s the type of a satire that we haven’t done for long. Many years ago there was a song ‘Ek Tara Bole Tun Tun’ from a Manoj Kumar movie (Yaadgaar, 1970). Such satire hasn’t been found much. These people have a strong team and their understanding is perfect. I feel if political satire is done in a mature way, it will be fun.