On his 46th death anniversary, a look back at how the New Theatres filmmaker averted an on-set accident in 1934 when Sharma worked as a still photographer.

Kidar Sharma, who gave Raj Kapoor and Madhubala their big breaks with Neel Kamal (1947), became a filmmaker after watching Debaki Bose’s Puran Bhakat (1933). He left his home and family in Amritsar, Punjab, and travelled to Kolkata to find a job in the film industry.

In his autobiography, The One and Lonely Kidar Sharma, he wrote of his experience after watching the film, “I felt like a moth being drawn to a burning flame.” He landed in the city not knowing even its language, but just that he wanted to work in films.

Eventually, Sharma got a job at Madan Theatres as an assistant painter under Dinsha Irani. As he grew more confident, Sharma found his way into the homes of artistes like Prithviraj Kapoor and KL Saigal, hoping for their advice and guidance. Saigal suggested that actress Durga Khote, the heroine of Bose’s Rajrani Meera (1933), introduce Sharma to Debaki Bose.

Therefore, a week later, Sharma finally met his idol Debaki Bose at Durga Khote's residence. He offered his services to help on the film set in any way, and Bose decided to make use of his photography skills and employed him as a still photographer on Seeta (1934). 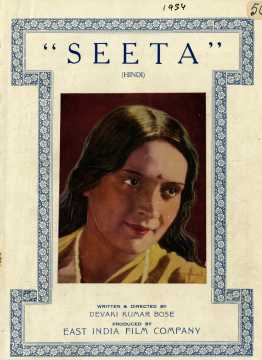 Khote and Prithviraj Kapoor were the leads of Seeta and the film was being produced by East India Film Company. Bose ambitiously wanted to create the effect of a night storm in the studio by using the propeller of a tiger moth airplane and had given out particular instructions to his crew and cast.

One camera was hidden in the pit of the studio and another captured the storm. The propeller was turned on and the artificial storm was created. However, Sharma noticed that the twigs and leaves were not flying about. He gathered up a small pile and was about to step towards the propeller to release them, when he heard a shriek.

He wrote of the incident, “Mr Bose’s hawk eyes had seen that if I were to take another step I would have been in the path of the blades, and would have been sliced to bits. He ran towards me, pulled me back with all his force and threw me to the ground. Mr Bose was furious and began to curse me in Bengali saying, 'It was none of your business to improve the effect of the storm. That is the art director’s job and my concern, not my still photographer’s responsibility.'”

The mood on the set grew quiet as everyone realized the import of what could have happened. Bose cancelled the shoot for the day and walked away, but Kapoor stayed and gave him an encouraging talk afterwards. The next day, there was an enclosure around the propeller and the scene was captured without a hitch.

So Kidar Sharma did not have a grievous end on the sets of Seeta, but ended up observing and learning more about the tips and tricks of the film trade from Bose.

He wrote, “In my opinion he is the greatest movie maker. No one even today can match his subtlety and the mastery of his creative directorial skill. I believe that he was the Dronachariya (supreme guru) of filmmaking and that all subsequent directors have learned a thing or two from him.”