The ever-smiling star of the 1940s and 1950s, Shyama, who died on 14 November, lit up the screen with her presence. Surprisingly from her film debut as a young girl in Shauqat Rizvi's Zeenat (1945), she played all kinds of roles onscreen, from second lead to vamp to lead heroine in Guru Dutt’s Aar-Paar (1954).

The actress was born Khurshid Akhtar in Lahore and her family moved to Bombay in the 1940s. The young Khurshid was one of nine children. A chance opportunity to see the singing star, Noorjehan, on a film set in Dadar, led to her being a part of the female chorus of singers and can be seen playing the dholak in the all-female qawwali.

After silver screen debut in Zeenat (1945), she worked steadily in a number of films until the 1950s. In Parwana (1947), KL Saigal’s last film, she had a small role as Baby Khurshid and by the early 1950s, she had graduated to lead roles as well.

She changed her name to Shyama upon a suggestion by filmmaker Vijay Bhatt but strangely, the two never worked together for a film.

In 1951, she acted in Sazaa directed by Fali Mistry, a cinematographer. The two fell in love on the sets.  The actress said in an old interview, “We were fond of each other. But I was very shy. I couldn’t express myself. Initially, he asked me not to work after marriage but I said that wasn’t possible. I had worked very hard to reach where I was.”

She married Mistry in 1953 and continued working. It may have proved to be her lucky charm as she got the biggest film of her career with a Guru Dutt production as the rebellious and modern Nikki in Aar-Paar (1954). Even now, the image of her on the poster in dungarees, still endures. 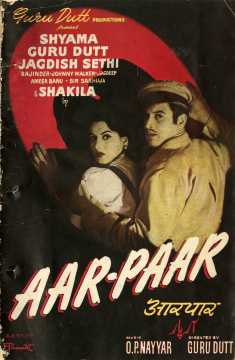 The film proved to be her starring turn as she was offered more and more interesting roles in films like Bhabhi (1957), Mirza Sahiban (1957), Sharada (1957), Barsat Ki Rat (1960) and Zabak (1961). In the latter film, a fantasy drama directed by Homi Wadia, she played princess Zainab who was romanced by hero Mahipal, a commoner.

In Sharada (1957), which completed 60 years this year, Shyama won her only major award, Filmfare Award for Best Supporting Actress. With co-stars Raj Kapoor and Meena Kumari, she played a woman whose husband is in love with his stepmother.

Even in two-heroine films with actresses like Nanda and Madhubala, Shyama held her own and remained popular. In the era of Nargis, Meena Kumari et al, Shyama was never without work. She never had any hangups about taking on grey characters as she did in films like Bhabhi (1957). Her personal favourite, she revealed to interviewer Tabassum, was Do Behnen (1959) opposite Rajendra Kumar where she played a double role in two avatars — Indian and westernised.

In the 1960s and 1970s, and after three children, Shyama switched over to character and maternal roles in films like Janwar (1965) and Chaitali (1975). Her last film in 1989 was Hathyar, a JP Dutta multi-starrer with Dharmendra, Sanjay Dutt and Rishi Kapoor.

Her Aar-Paar (1954) co-star Shakila also passed away in September 2017. Shyama continued to reside in Mumbai, but largely stayed away from the limelight. In the same interview, she had said, “Log aaye our chale gaye, yaadein chhod gaye. Meri dushmani kisise nahin, dosti hai sabse (People came and went, leaving behind memories. I have enmity with none, friendships with all).”