As per the latest information, 70% of the shooting of the film has been completed and it is expected to be released in April next year.

Kangana Ranaut is currently busy shooting for the keenly awaited film Manikarnika: Queen Of Jhansi in Rajasthan. She recently celebrated the birthday of the film’s director, Krish, on the sets of the film in Jodhpur.

Though a simple affair, the director had two cakes to cut. Apart from Ranaut, the birthday party was attended by quite a few members of the film's crew. From the pictures shared by the makers, the Queen (2014) actress was all smiles as she embraced her director. She was dressed in a simple T-shirt, trousers, and a red cap.

As per the latest information, 70% of the shooting of the film has been completed. The team is expected to wrap up the shooting in January 2018 and the film, reportedly, will be released in April next year.

Krish, whose real name is Radha Krishna Jagarlamudi, is a well-known director in the Telugu film industry. He has made some acclaimed films like Gamyam (2008), Vedam (2010), Krishnam Vande Jagadgurum (2012) and Kanche (2015).

He made his Hindi directorial debut with Gabbar Is Back (2014), starring Akshay Kumar. The film, which went on to become a success, was one of the first to feature Akshay Kumar in a socially relevant subject. 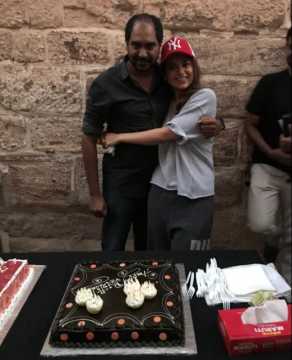