2.0 poster: Akshay Kumar sends a chill down your spine


The actor's avatar is menacingly scary as the antagonist in the Rajinikanth-starrer.

Makers of S Shankar’s 2.0, sequel to the 2010 blockbuster Robot, have revealed the entire look of Akshay Kumar, who plays the antagonist in the film also starring Rajinikanth.

So far, whatever little the audience had seen of Akshay in the poster material had been impressive. In the new poster, there is menace written all over Akshay’s face in the posters.

The makers had revealed earlier that the actor’s character is based on a crow. The actor’s eyes, dramatically long eyebrows and the dark colour scheme speak volumes of the character's shades. In an earlier poster, we saw Akshay’s crow-like claws. But the new posters show that he also has long vampire-like teeth. Needless to say, his look is scary.

During the first poster launch of the film last year, Rajinikanth had stated that Akshay’s character in the film is more interesting than his own.

2.0 is slated to be released on 25 January 2018. However, Akshay's other film, Padman has 26 January 2018 as its release date. It is speculated that the release date of 2.0 may be postponed. There hasn’t been any official announcement about the same yet. 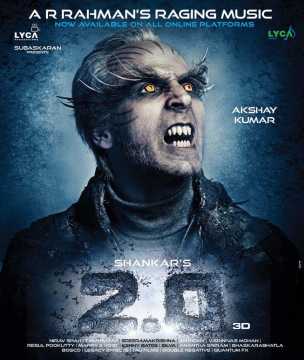