Shraddha Kapoor: Grateful that I started with failure


The actress opens up about dealing with controversies and failures, her forthcoming film Half Girlfriend and the challenges in her upcoming biopics — Haseena and Saina.

Shraddha Kapoor walks into the room in a dainty green dress, hair neatly tied up in a high pony. Despite the air of negativity that has surrounded her in the past few months, she shows a positive spirit from the word go.

The actress has been mired in controversy that projects a tumultuous relationship with filmmaker-actor Farhan Akhtar. Her last two films, OK Jaanu (2017) and Rock On 2 (2016), failed to make a mark at the box office. But failure is nothing new to Shraddha Kapoor. Despite being born in a film family (her father is the veteran actor Shakti Kapoor and her aunts are Padmini Kolhapure and Tejaswini Kolhapure), she has had her share of struggles from the beginning of her career.

“Every Friday can change things for you," says Kapoor with an attitude that is seen in most artistes who have managed to achieve longevity in their careers. "My life changed with Aashiqui 2. Since then it’s been back-to-back films. I feel very grateful that I started off with failure. What you can learn from failure, success can’t teach you, because in success everything is going great so what will you really learn? When you are put in a situation where things are not going right, you learn the most."

When it comes to the nasty stories about her love life that have been appearing in a section of the press, Kapoor says she has learned to deal with it, even if the hard way. "I choose to ignore it now," she says. "It can become like a TV serial. I didn’t even know that I am part of this serial, playing this character. I find it funny and laugh at it also. Initially, I used to get affected."

When rumours of her moving into Akhtar’s apartment and her father dragging her back home appeared in the media, the actress issued a statement saying nothing like that had ever happened. "I gave that statement then because when it involves your family and when it's fiction to such an extent… I had to say it. But now I am ignoring it," she explains.

While her contemporaries — the spunky Parineeti Chopra and the inherently humorous Alia Bhatt — are known to be charming, few people know how goofy Shraddha Kapoor can be. The Half Girlfriend actress actually cracked everyone up in the room quite a few times during this interview. From calling one of the journalists a laughing Buddha to demonstrating her own maniacal laughter — the actress displayed her goofy side quite a few times.

By her own admission, Kapoor is a tomboy, and she promises that though she may appear all classy in public, she is quite different with friends and family. And one of the people who has seen her real side is her director Mohit Suri, who calls Kapoor his muse and with whom she has delivered two big hits (Aashiqui 2 and Ek Villain).

"He knows me a little too well," says Kapoor. "When I had gone to his house [to discuss Half Girlfriend], Udita [Goswami, Suri’s wife] said you have done films together where she has done characters that come from a humble beginning and are that of a girl next door. How are you going to see her as Riya Somani? How challenging will it be for you two? Udita made us realize how big the challenge was.

"I don’t think I am very girly. Maybe in front of you I am sitting all proper and refined. But with my friends and family I have a very different side. Mohit has seen that side. If I really crack up, the laugh is not very feminine,” she adds, displaying the kind of crazy laughs she sometimes breaks into.

About Suri, she says, “Mohit hasn’t changed since Aashiqui 2, which is a good thing. Only thing is that he used to be a lot more vocal on sets. Back then when he was angry he would express it. Now he has calmed down.”

Kapoor slowly takes off her sandals and relaxes in her chair, even folding one leg up at one point. She is all about comfort. Her on-screen persona in that sense is very similar to her real self — the quintessential girl next door.

Speaking about the character of Riya Somani, which Suri and she have brought to life in Half Girlfriend, Kapoor says, "Riya Somani comes from an affluent family. She is one of the few girls who blow-dries her hair, wears prim and proper clothes, and goes to college. She is the most popular girl in college. Every guy wants to be with her. Everyone might think from the outside that she must be happy as she has everything. But that’s not true. She is actually looking for something that will give her happiness. That is when the simple Madhav Jha comes into her life. Though she wears the top designer clothes, her happiness comes from simple things like getting wet in the rain."

Kapoor also had to bring some of her sports skills from school to the fore in Half Girlfriend, as she will be seen playing basketball in a few scenes. While she aced track and field and football during her school days, she wasn’t that good at basketball. Times have changed since 1998’s Kuch Kuch Hota Hai, where lead stars broke into a basketball court sequence with no real training.

“Learning basketball from NBA professionals was fun and very challenging," says Kapoor. "I played basketball in school, but I was a substitute player. They would only call me when someone was injured or tired. I would go in and be like (makes faces and acts out dribbling the ball)... but never scored a basket,” she admits. 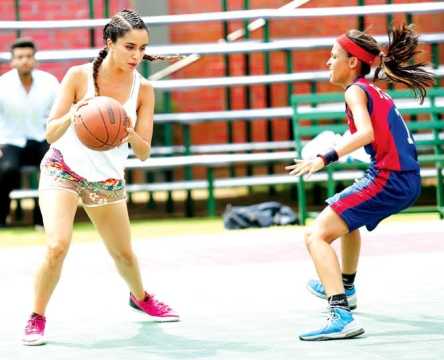 While Half Girlfriend slightly deviates from her on-screen image, it still is in the love-story zone in which Kapoor has found comfort. Often criticized for not pushing the envelope when it comes to executing her characters, Kapoor will soon be taking on the challenge of proving her mettle as an actress in her upcoming films — Haseena and Saina, diametrically opposite biopics.

While she may have displayed basketball skills in some scenes in Half Girlfriend, stepping into the shoes of a professional badminton player like Saina Nehwal, who is still at the top of her game, will be a tough task.

“Basketball was just a part of Half Girlfriend. But badminton is the crux of Saina. Basketball training was for three weeks, while this will be for a few months. It will be challenging. It will be fun to learn from her. She is going to teach me some. I have spoken to her and exchanged messages, but I am looking forward to spending time with her. It is important for me to give that much time before the film to prepare. I will have to train a lot, a lot. I have to give it my all," says the actress who is looking to match the sporting skills displayed by the likes of Priyanka Chopra in Mary Kom (2014), Sushant Singh Rajput in MS Dhoni: The Untold Story (2016) or Aamir Khan in Dangal (2016) in recent times. "Yeah, that’s exciting and scary at the same time," she says.

Kapoor's next film after Half Girlfriend is also a biopic, albeit of a different kind — Haseena: The Queen Of Mumbai, based on the life of gangster Dawood Ibrahim's sister. The actress struggled to gain weight and also took the help of prosthetics to get her look right. "I tried to gain weight for this film and everything went only to this area (points to her belly). And a little bit here (the neck). I was trying to gain weight on my arms, but it just wasn’t happening. I was hoping I would gain some weight on my face also, but it just didn’t happen. Now I still have weight here (again pointing to her belly) and I need to lose all of it for Saina [her project after Haseena]," she says.

Films like the Saina biopic can really push an actress and help her grow, and Haseena: The Queen Of Mumbai, will, in a sense, be her litmus test when it comes to proving she has got unexplored potential. “I told some people I am doing that film [Haseena] and they were surprised, because I don’t know if people would see me playing the character. So that reaction was very interesting. The reaction to the first poster was overwhelming, too. I hope people react to the teaser in the same way," says Kapoor, now at the threshold of making a transition from the pretty girl next door to a commendable actress and star.