The period film, written by KV Vijendra Prasad, is planned for release on 27 April next year.

Rangoon (2017) is forgotten as Kangana Ranaut is gung-ho about her next big project, Manikarnika – The Queen Of Jhansi. It is a period film based on the life of Rani Laxmibai. The makers chose to launch the poster in Varanasi.

Dressed in a desi outfit, a splendid-looking Ranaut took a boat ride to the venue. The early images coming from the event gave a glimpse of the poster. Ranaut’s image is partly hidden by the bold title, but Ranaut looks apt as the historic character. A sketch of her character had surfaced before. 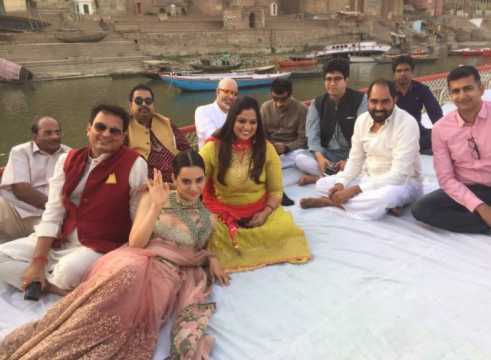 “Rani of Jhansi is very relatable for women like us," the actress said at the event. "Back then, the British had offered Indian kings and queens to surrender to them or face death. They had two choices — live without dignity or accept death. She chose the latter. A life without dignity is worse than death."

Directed by Krish, the film is planned for release on 27 April 2018. A filmmaker from the South, Krish made his Hindi debut with Gabbar Is Back (2015).

Manikarnika – The Queen Of Jhansi was to be earlier directed by Ketan Mehta before alleged creative differences with Ranaut forced the veteran filmmaker to opt out.

The film is written by KV Vijendra Prasad, the man who has scripted films like Baahubali (2015) and Salman Khan’s Bajrangi Bhaijaan (2015). Prasad is the father of Baahubali director SS Rajamouli.

Manikarnika was married to the raja Gangadharrao Newalkar of Jhansi in May 1842 and renamed Lakshmibai (or Laxmibai) in honour of the goddess of wealth. She was one of the leading figures of the Sepoy Mutiny or First War of Independence of 1857 and became a symbol of resistance to the British Raj for Indian nationalists.