Ali Fazal on Victoria & Abdul: Happy I can bring something to the table


At a press conference after the launch of the film’s trailer, Ali Fazal shared his experience of landing the role of Abdul Karim and shooting with Dame Judi Dench, who plays queen Victoria.

Victoria & Abdul, starring Dame Judi Dench and Ali Fazal, had a worldwide trailer launch on 30 May. Lead actor Ali Fazal was in Mumbai to present the film and later spoke to the media about his role, acting alongside the veteran actress, and why he has not read the book on which the film is based.

Directed by Stephen Frears, Victoria & Abdul is a true story. Fazal explained, "Abdul Karim was from Agra [and] went to [England] as a servant, but there was much more to him, which you will see once you see the film. They had an unlikely friendship about which even the royal family has not talked much till today. But there is a beautiful account of it in Shrabani Basu’s book which has the same title."

Ali Fazal made a conscious choice not to read the book. When Cinestaan.com asked him about it, he replied that he did start reading it, but "I think [Academy award-winning screenwriter Lee Hall] had written a very interesting script and he had a different take to it. And I didn’t want to spoil it in my head because it was all about firsts — coming to England and experiencing that. The script was structured in such a way. It was such a personal choice, it’s nothing profound."

But because he didn’t end up finishing the original source material, Fazal had to catch up reading eight to 10 more historical books on the time period. But he says that was all part of preparation for his role.

The actor said he went through a proper process of auditioning for a part in the film. "I was sitting in a meeting, I wish one day I will take that person’s name because I owe it to that person. She is from the industry and she told me about the film and that the auditions are over, but why don’t you try? I called up the casting director, Nandini, and told her I would record my audition," he said. "It was on my phone and we sent it. Then I forgot about it, because after around 25 days, I got a call that they really liked it and they want to see another version and they are coming down to India."

There was a long list of actors from India that the filmmakers considered for the part of Abdul Karim, but eventually Ali Fazal won them over. "I feel very privileged because there are some of my colleagues whom I really respect and to be picked over them is already a big award for me," he divulged.

Ali Fazal later went to London where a few test scenes were shot with other actors and, much later, when he came back to India, he got the call {in the bathroom of a Bandra restaurant, no less) that he had got the part. 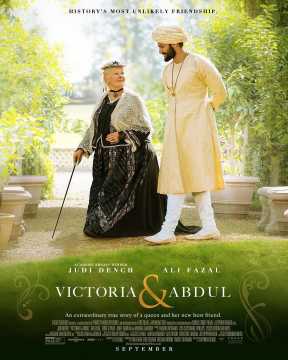 He met his co-star, Judi Dench, in London where the two had a lunch to meet each other and break the ice. Dench was very welcoming and put him at ease, he said. That was how their off-screen friendship began.

Their first shooting schedule was in Scotland where the cold and the strong winds made it hard for the actor to stand straight (as an attendant must) in the shot. The location also provided a challenge in the shape of midges — the small insect bites made it hard for both him and Dench to shoot in a boat on a lake. It ended up taking around four hours to can one shot.

Fazal was not worried about sharing screen space with the veteran actress. Instead, he said, "For me, if my co-actor is good, and especially if it is Judi Dench, very selfishly, my job becomes very easy. It becomes half of what I need to do. A lot of people don’t think that [however]."

Dench has shot in India previously for a few films and the co-stars talked about the country and its food. Fazal was quite keen that she come down to India to promote the film. He told the assembled journalists that he tried to clarify that the Indian film industry is not just Bollywood, "we are much more than that".

Obviously, the actor was excited about his significant part in an international film. He said, "It’s probably after a long time that [Indian actors] are exchanging notes on a global level." The last actor who did a role like this, he recalled, was Shashi Kapoor, but nobody really talked about that.

Fazal also pointed out that his Victoria & Abdul director, Stephen Frears, had also worked with Shashi Kapoor in Sammy And Rosie Get Laid (1987). "I think now times are changing. There is a lot of blind casting happening, people understand that there is talent across the globe. You can’t be myopic about it, especially with the internet opening up, [with] Netflix and Amazon. I’m very happy that I can bring something to the table,” he said.

Ali Fazal also revealed that he worked hard with the makers of the film to not make his character a caricature, especially with the accent. "I was very adamant on certain words also that Western culture does not understand and these are words and names that you can’t pronounce any other way. It is a back and forth thing. If you have a point, people listen today,” he said. "There was nothing cliched because Abdul Karim was an educated man. So the English he is speaking is legitimate. The Urdu he is speaking is Urdu. It’s not English Urdu."

Despite his big break in Hollywood, Ali Fazal insisted that he was not bailing out on Indian cinema but was proud of his journey so far. "I’m enjoying this ride because it is the one chance we as actors are getting to share something to the global stage, to world cinema. I think that’s really important. And it’s amazing that I started my career with a small part in 3 Idiots (2009) and I started my career in Hollywood with a small part in Fast And Furious 7 (2015),” he said.

Victoria & Abdul is due to be released in theatres in India on 15 September.