Before getting suspended again, the singer took a dig against 'Anti-Nationals' and criticized the people running Twitter.

Singer Abhijeet Bhattacharya just does not understand Twitter. After being suspended from the micro-blogging site last week, he created another profile last evening. The description read, ‘I am the best....I am the best,’ a reference to the song from Shah Rukh Khan’s Phir Bhi Dil Hai Hindustani (2000). However, this new profile was suspended by Twitter within hours.

Bhattacharya soon posted a video along with the caption, “#VandeMatram I am back #Antinationals can't stop my voice, salute to #IndianArmy. This is my new Twitter account... Rest are fake...”

The singer did not, however, change his confrontational stance. Before his new account was suspended, he spoke to an agency and slammed Twitter and the people running it. He said, “It’s because of us that Twitter gets followers, not the other way round. But people who don't have any followers are running Twitter, who have made it a platform to voice out their opinions.”

He once again expressed his disappointment on getting his ID suspended last week. “I know many users who abuse a person left, right, and centre but still their accounts are never suspended. What I said was just ‘Besharam Budhia’ or supported Paresh Rawal on his tweet regarding Arundhati Roy..and still my account was suspended,” he said.

However, the actual reason for his suspension last week was his accusation against a student leader for running a prostitution racket. He had said, “There is rumour she took money for two hours and didn't satisfy the client... Big racket.” 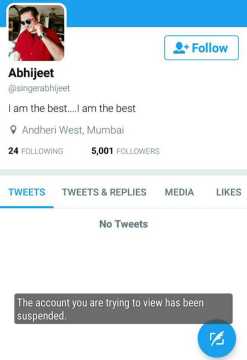