Nigam listed down the reasons for quitting Twitter before saying the final goodbye.

Nigam expressed shocked last evening over the suspension. He wrote on his Twitter page, “Really? They suspended his account? Why? 90% of Twitter accounts then should be suspended too for worse fanaticism, Foul language & Threats!”

Today morning, he wrote a series of tweets, 24 of them, explaining his decision to quit.

He started off announcing through a couple of tweets saying, “1 Hello Press, Twitteratis, Tweeples and Tweetios, get ready to take screen shots of my following messages for they won't remain here 4 long. 2 I bid adieu to Twitter and my close to 7 Million followers today, leaving most Disappointed and angry at me, and some Sadists Happy.” 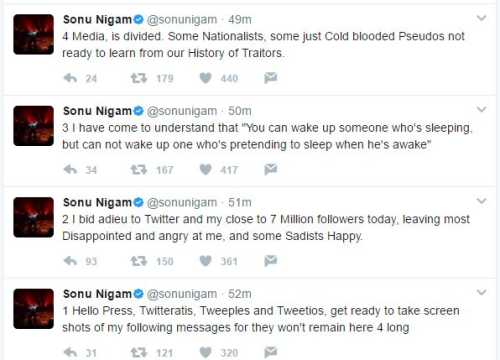 While hinting at his last month’s comments against the use of loudspeakers for azaan, he said that he is upset with the outrage he received. “4 Media, is divided. Some Nationalists, some just Cold blooded Pseudos not ready to learn from our History of Traitors. 5 Hv seen Love Pouring in from Most Quarters 4 my Balanced approach; & unreasonable, illogical, ruthless, Profanities being hurled frm other,” he said.

He also went onto accuse youngsters of behaving like terrorists. “6 People blessing you on one hand; and some wishing Death upon you. Even some young Girls and Boys and Kids behave like terrorists,” he said.

Nigam is mostly upset to see Bhattacharya’s account suspended, but Rashid being spared. “8 Accepted Arundhati has d right to her opinion about Kashmir, but then the other billion Indians have the right to feel Let Down too right? 10 One Could disagree wth Abhijeetda's language but isn't Shehla's accusation tht BJP has a Sex Racket, Provocation enough to Supporters? 11 If His account is deleted, why not Her? And the other Morons who hurl Mother Sister abuses to every Achiever?” 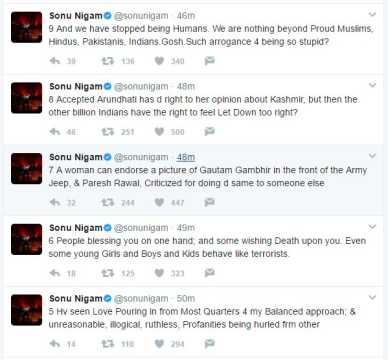 His last tweet read, “24 Shall Delete d account in a bit so the messages are conveyed clearly and with Utmost Humility and Good Intent. Thanks Twitter.” 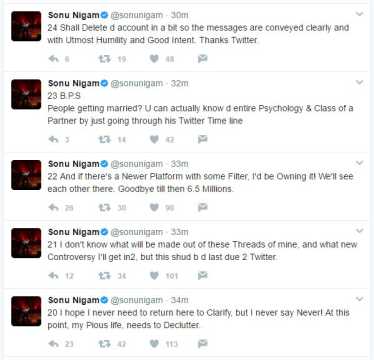 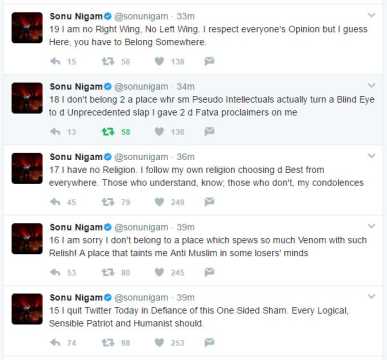 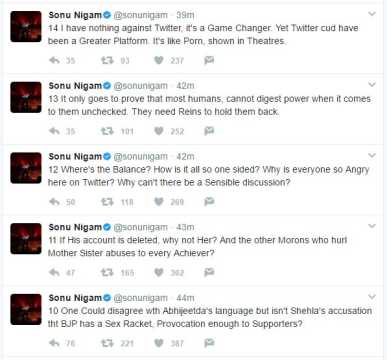