The singer claims his tweets weren't offensive at all.

The student leader had criticised the ruling Bharatiya Janata Party (BJP) while sharing a news about the arrest of their leader Neeraj Sakya for allegedly running a sex racket in Bhopal. Sakya was suspended from the party soon.

Replying to Rashid, Bhattacharya wrote, “There is rumour she took money for two hours and didn't satisfy the client... Big racket.” There was an instant uproar against the celebrated singer of the 1990s. After a lot of Twitter users reported his tweet, the account was suspended. 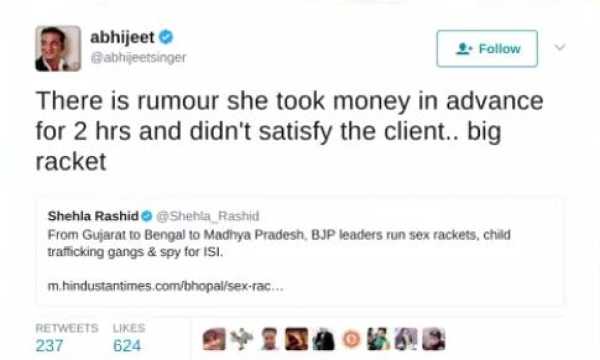 Rashid is pleased by the action taken against the singer. She wrote, "Sincere thanks to everyone for the support. Abhijit had to delete his tweet.
His Twitter account has also been suspended. :)"

Bhattacharya, however, believes that his tweets weren’t offensive and he has been wrongly targeted. Speaking to a publication, he said, “My tweets were not at all offensive. The entire nation today stands with me. Those offended are the anti-national elements. They can abuse the Indian Army, they can speak against our Prime Minister and get away, but mere replying to their tweets can get your accounts suspended.”

Likewise, the singer has received a lot of support on the social media site. In fact, a number of users even trended #IstandWithAbhijeet on Twitter.

Bhattacharya has been a habitual offender on Twitter. Last year, he received severe criticisms for writing a series of inflammatory tweets against journalist Swati Chaturvedi. One of his tweets read, “Besharam budhiya..U not proud of Indians? Wats your breed? U sk pakis..I fk Pakis, U lick..I kick, dnt block just wait.” In another instance, he told a woman on Twitter, "You Ms Pak. Tell me your cage no? Will reach there..."

After Chaturvedi registered a police complaint, he was even arrested. He reportedly broke down after being released on bail. However, he later said that he would repeat his acts if need be.

Bhattacharya has always hated Pakistani singers visiting India for work. He has been against filmmakers like Mahesh Bhatt too for roping them in his films.

When Ghazal maestro Ghulam Ali was supposed to visit India in 2015, the controversial singer had ranted against him writing, "These shameless people have no self respect, no work except terrorism. So called Hindu political parties jst shout 4 mileage bt never tk action agnst these Dengu Artists from terrorist country.These qawwals don't come here on their merit but due to paki Dalals #prestitute and @MaheshNBhatt."