Neecha Nagar at Habitat Film Festival: The lowly film that won Cannes over


Before the age of overseas marketing, and red carpet appearances, Chetan Anand's Neecha Nagar made history by winning at the first Cannes Film Festival while being ignored completely back home. Neecha Nagar will be screened at the ongoing Habitat Film Festival in Delhi.

Neecha Nagar will be screened at 11am today (21 May) at the ongoing Habitat Film Festival in Delhi.

Among the many firsts that Neecha Nagar achieved was that it was Chetan Anand's first film as director. Having dabbled in plays with the Indian People's Theatre Association (IPTA) since the 1940s, Anand decided to take up films after realising the potential of the film as a medium. Based on the story by Maxim Gorky, Lower Depths, Neecha Nagar was every bit the social message of the milieu it represented.

In Balraj Sahni's autobiography, the actor recalls Anand offering the first revelation of his directorial ambitions. Sahni writes Anand saying, "You know, I am not at all keen on acting...What I want to do is to make a realistic and purposeful film. I have decided to call it Neecha Nagar. I shall show in it the economic struggle waged by the different classes of our society and I am not going to make any compromise with the box office. In fact, right now, I am working on its scenario."

True to his word, Anand created a film that depicted this very struggle. Neecha Nagar was a simple film that spoke about the age old issue of class conflict. A wealthy landlord seeking to appropriate the land from a slum, diverts the drain from the wealthy housing society into the slums. The protagonists, played by Kamini Kaushal, SP Bhatia, and Rafique Anwar, wage an uphill battle to protect the residents of their poverty stricken hamlet. 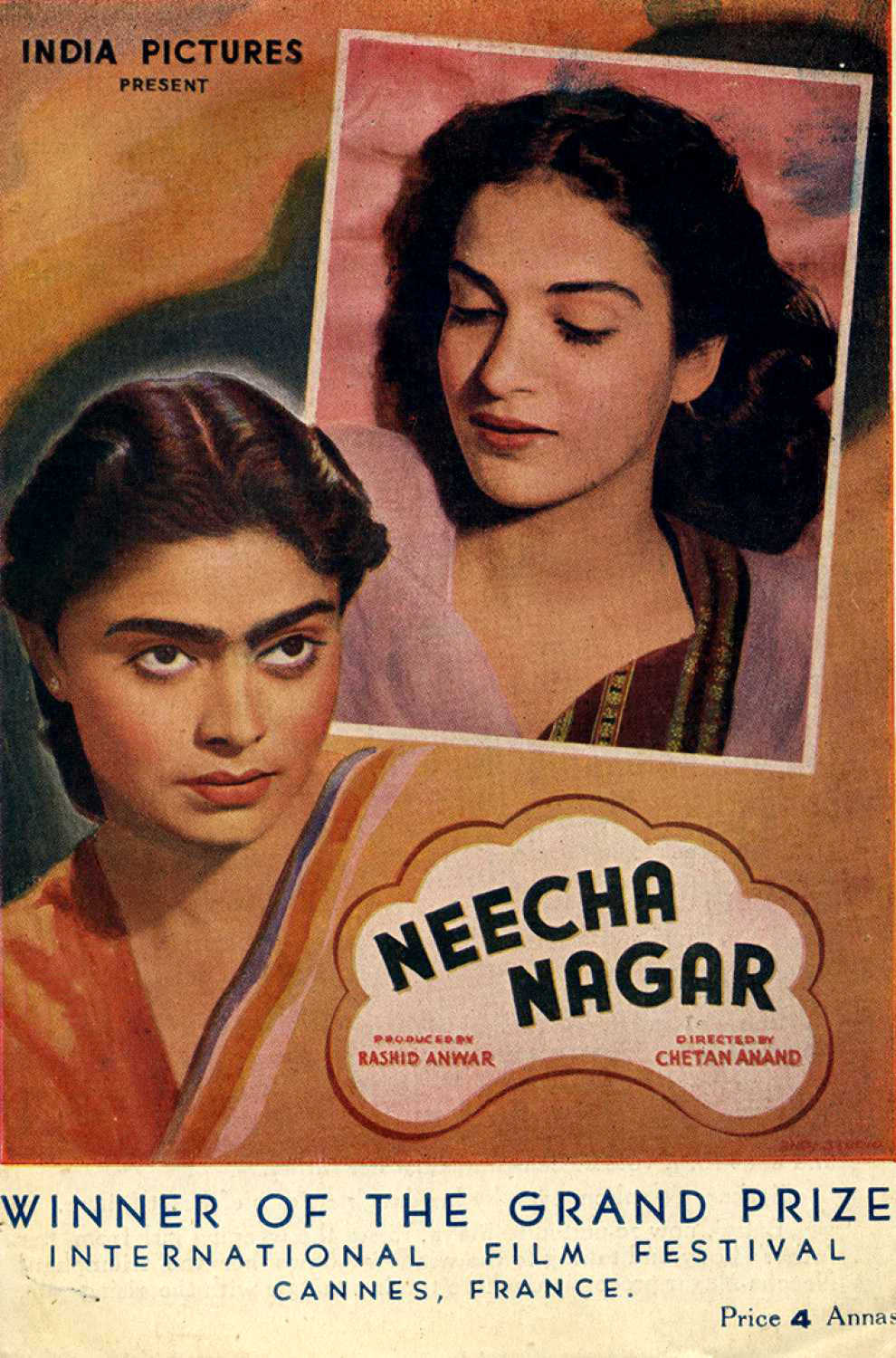 Looking back, it is easy to see why Chetan Anand's film found resonance among the audience at Cannes. The film tackled very humanist and universal issues that were being voiced by filmmakers like Eisenstein, Pudovkin, Wilder, and Roberto Rosellini. Written by Khwaja Ahmed Abbas and Hayatulla Ansari, the film was hard hitting, socially relevant and realistic. The performances of the stellar cast including Uma Anand, Chetan Anand's wife, in her only acting role, added to the entire collaboration.

Not only was the film's story based on a universal battle, it used techniques that set it apart from any other film in the Indian subcontinent. Chetan Anand's film arrives at its climax with a dialectical montage that has a stunning effect on its audience. At a screening in 1946, director Mrinal Sen was so moved by the scene that he sought out the cameraman, Vidyapati Ghosh to learn how he shot it. To Sen's surprise, Ghosh said he only carried out what Chetan Anand directed him to do.

The film also marked the early appearance of a number of personalities who would go on to play important roles in other landmark Indian cinema moments. It was in Neecha Nagar that Pandit Ravi Shankar first composed a background score, a decade before he worked with Satyajit Ray on that magical score of the Apu trilogy. Another IPTA member, and Uday Shankar protege, Zohra Sehgal acted in the film, along with composing a dance sequence at the opening of the film.

Despite the presence of such a stellar music and dance background, Chetan Anand decided to edit out the sequences before release. Perhaps, this played to the gallery of foreign audiences ignorant of the cultural essence of music in Indian cinema, and enhanced the drama of the film. At the Cannes festival, Neecha Nagar won the Grand Prix du International du film (Best Feature Film). It shared the award with films like Billy WIlder's The Lost Weekend, Roberto Rossellini's Roma: Open Citta (Rome, Open City) and David Lean's Brief Encounter, among others.

The writer, Anton Chekhov, upon reading Gorky's story, had written to him. Chekhov said of Gorky's plan to stage the story, "The tone is gloomy, oppressive; the audience, unaccustomed to such subjects, will walk out of the theatre, and you may well say goodbye to your reputation as an optimist…"

This proved, sadly, true for Anand's film in India. Distributors refused to take a punt on a film without song or dance. The turmoil of the looming Partition played against the film as well. Anand took the film to then Prime Minister Jawaharlal Nehru in 1950, but it failed to make any difference to the coin counters.

In the late 1950s, the film went missing. It only resurfaced when Subrata Mitra, Ray's cameraman discovered it rotting in a junk shop. It is no co-incidence that someone connected to Ray would find it. In Uma Anand's book, The Poetics of Film, she mentions how the Anands received a letter from someone in Calcutta who was inspired to make his first film after watching Neecha Nagar. That person was Ray.

Seventy years later, as Cannes Film Festival turns into a fashion parade with Aishwarya Rai Bachchan, Deepika Padukone and others earning press accolades for the length of their gown's train, it seems like an irony that the first Indian representation at this prestigious festival was Chetan Anand's cinematic tract on the class divide — Neecha Nagar.