Thirteen years before Guide (1965), SS Vasan’s Mr. Sampat (1952) was the first instance of acclaimed novelist RK Narayan’s work adapted for the big screen. On his 16th death anniversary (he died 13 May 2001), we take a look at this long-forgotten feature film.

Way before Vijay Anand’s Guide captivated audiences, another novel, Mr Sampath – The Printer of Malgudi, written by RK Narayan was turned into the Hindi film, Mr. Sampat (1952). Directed by SS Vasan and starring Motilal and Padmini, the film was not a complete copy of his novel; but borrows elements from it. However, the biting satire remains one of the more unusual films to emerge from the 1950s.

Versatile actor Motilal stepped into the shoes of silver-tongued con man Mr Sampat who is always looking out for his own good. And woe upon anyone who happens to fall into the tangled web that he weaves for his own benefits.

When the film opens, Mr Sampat is penniless while travelling in the train. We soon learn that he is a man of all trades. His title and occupation keeps changing throughout the film — he’s a reporter, a consultant, and eventually the director of a theatre group.

He learns the whole city is enamoured by Malini (Padmini in her second Hindi film), a popular actress at the Kala Mandir. Using her name to get by, he freeloads money and food from Agha, owner of the Hanuman Vilas restaurant, and Kanhaiylal, playing Seth Makhanlal Gheewala, a rich factory owner hoping to get elected into the municipality.

Using the backdrop of the theatre group, Malini and the troupe sing and dance about the ailments of the new nation — especially the imbalance between the rich and poor. Director Vasan shows everyone (retired seniors, politicians, union leaders) making a big show that they want to help the poor, but it’s seems to be all talk and no action.

They walk past a man suffering from hunger. Even the director of Malini’s theatre group stops to take a photograph (for the sake of art!). In the end, it is another poor man who stops to help the hapless man, and feed him a decent meal.

The director’s ambitious play, especially one imagines a future (in the year 1963) where the consumer himself puts in the money for the goods taken, the police are not chasing after criminals and thus have time to play table tennis, and not a single poor person can be found to do charity for.

The second half of the film is quite different to the first when Mr Sampat puts his plans to action. He schemes to open a bank, The Friends Bank, with Seth Makhanlal that will double the savings of its customers. Mr Sampat also comes between the director and Malini, getting her to form her own company to perform plays.

Money is spent lavishly everywhere, with the smooth-talking Mr Sampat being the beneficiary. What is to happen to Malini, Seth Makhanlal et al when they find the creditors knocking on their door? 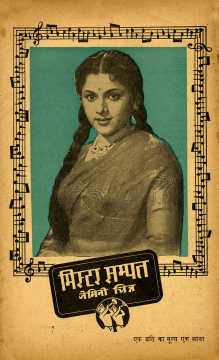 In the book, 40 Retakes: Bollywood Classics You May Have Missed, Vasan's son, S Balasubramanian had said, "My father was also the editor of the famous Tamil weekly magazine, Ananda Vikatan, and a close friend of RK Narayan from Mysore. During their discussions, a nice screenplay, full of satire and humour, came up with the help of Narayan. Immediately, my father launched the Tamil movie called, Miss Malini, with Kothamangalam Subbu, a satirist himself and a lyricist, in the role that Motilal played in the Hindi version."

The role of Mr Sampat became a highlight of his career. He manages to squeeze out of sticky situations saying, “I’ve got an important engagement.” In a 1963 interview, Motilal had said, “I decided to play Mr Sampath, with his lack of attachment, his desire merely to live his life as he wanted to, not as an extraordinary person, but precisely as an ordinary person.”

In retrospect, Mr Sampat seems even more relevant now. The politicians in the film know how spout the right speeches, but not act upon. The concerned citizens want change but still get duped for their votes.