In an interview with Cinestaan.com, the film critic and senior columnist at Indian Express speaks about her new book, 50 Films That Changed Bollywood 1995-2015, and why Aditya Chopra’s debut film has set the standard in love stories in Hindi cinema.

Shubhra Gupta’s new book,  50 Films That Changed Bollywood 1995-2015, chooses the films that have changed the landscape of Hindi cinema over the last two decades. These include the usual suspects like Dil Chahta Hai (2001) to Munna Bhai M.B.B.S. (2003), but also brings in films like Dhoom 2 (2006) and Bheja Fry (2007) whose contributions to the changing industry may not be so evident. Gupta brings her own unique perspective after reviewing these films for 20 years. The book includes her original review of the films as a comparison of then and now.

The film critic spoke with Cinestaan.com about about the films she chose, those she left out, and what her hope is for the future of Indian cinema. Edited excerpts below: 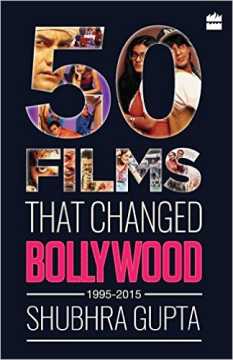 For filmmaker Shekhar Kapur, Indian film history starts with before Sholay or after, but you argue in your book that there's a new shift, before Dilwale Dulhania Le Jayenge (1995) and after? Can you explain why?

1975 was the year of Sholay. Dilwale Dulhania Le Jayenge (DDLJ) was exactly 20 years later, [in] 1995, so that was another seismic shift. Sholay is still a huge game changer. But there is no doubt that DDLJ is an equally big game changer. In fact, we haven’t had anything to challenge the DDLJ template after that. As far as I am concerned, it turned Hindi cinema into Bollywood.

I have expanded on this both in the introduction as well as the chapter on DDLJ as well, [because] every time I reference a love story, the DDLJ reference comes up. There hasn’t been as huge a tentpole love story, challenging the tropes that Yash Raj brought up in DDLJ, in the last 20 years.

Every film that makes it as big, like Jab We Met — a girl and a guy meet in a train, part and then come together again in this large homestead of a large-hearted Punjabi family, it’s the same DDLJ kind of template which Imtiaz Ali picks up and refreshes.

So what I’m trying to say is that there’s been such an overhang of DDLJ on the Bollywood film industry, on love stories particularly. There hasn’t been another film that has either overturned it or subverted it or done something radically different. Bollywood is still, in a sense, making the same film. Shah Rukh [Khan] is still making the same film. He actually does a redux in Dilwale (2015) with Kajol, his DDLJ co-star, [and] with Rohit Shetty, which to me is a really strange marriage of a guy who makes these pastiche films to do a classic romance.

When [DDLJ] came, it was just another love story. It had its moments, it had these two guys sparking off each other and it had the kind of dialogues – easy, playful, which hadn’t happened before DDLJ. When I saw it then, it was a good enough film that engaged me, but who knew it was going to be this really big, iconic film?

It’s still running in Maratha Mandir. That’s amazing. One of these days when I come to Mumbai, I have this thing, that I will go there and I will watch it. It’s like a pilgrimage [and] it’s nostalgia. I guess there are some films that really do have long legs and this one is one of those. There are a lot of people, in this generation particularly, who’re not as entranced with Sholay as they are with DDLJ, because it still has a freshness and a youthfulness and a kind of a connect. You will find resonances if you see that film 20 years down the line because not much changes in young people who come together in this kind of a manner.

You've kept your original reviews alongside your revisits of each film. Which films would you say have stood the test of time?

Pretty much every single one, despite the obvious datedness. There are some parts of the film that didn’t work for me even then. I remember in Hum Tum (2004), the cartoon characters went on gabbing on and on, which I found even more annoying this time around.

There’s Rohit Shetty’s Golmaal: Fun Unlimited (2008) which I didn’t like then at all, which I didn’t like even more when I saw it, because there’s no redeeming feature in that film. I’ve chosen the film for what it did, in terms of the fact that it sort of turned the Bollywood comedy definitively in the Rohit Shetty direction, from Govinda and David Dhawan to Priyadarshan to Rohit Shetty. [They] have been the high priests, if you like, of Bollywood comedy in the last 20 years.

When Golmaal came, it was excruciatingly painful to watch that film and it still is. As far as Rohit Shetty is concerned, I’ve only liked his Chennai Express (2013). I’m really fond of that film, I think it has a great sense of place and it has this business of not pandering to North India [by not] translating all the Tamil dialogues. It gives you a kind of creation of a place which is authentic in the Shetty way. He understands this ethos and he’s not going to change it just because we don’t understand it. He’s asking us to do all the heavy lifting which I like. I liked it enough to say ‘Hey, that was a fun film,’ but Golmaal, I’m afraid, didn’t do anything for me and it still didn’t do anything for me when I re-watched it.

You must have left so many films out — did any come close to making the list? Can you reveal which ones?

When people ask me this question I say, Rocket Singh: Salesman of the Year (2009), not being able to include it, really broke my heart because it was one of my absolutely favourite films. I wanted to also include Manorama Six Feet Under (2007) and Let’s Talk (2002) which I really liked (Ram Madhvani’s film). In fact, I was pushing for 100 but my publishers have a template. So then I had to be ruthless and whittle it down to 50, but I had enough to have a 100. People are now suggesting, not so much in jest, that I should do another (book).

Yes, a part two — choosing from among all the ones I really liked, even if they didn’t pick up the zeitgeist in the way any of these [the films in the book] did or stretch the narrative in a particular way.

So yes, maybe at some stage, who knows? I do reference other films that are similar to ones I’ve chosen (in each chapter). I wish I could have got in those that just missed being included, or didn’t make the cut, though. It would have been so much fun.

You narrowly missed the tragedy in Uphaar cinema on June 1997 and you had to write your review of Border right afterwards? Can you tell us what you were feeling that day?

It happened in the show immediately after the one I was in ...

You weren’t aware of what happened until afterwards?

People were calling the landline (remember, there were no mobiles those days) asking whether I was safe. I had gone off to another film that had released that week and by the time, I got back... literally so many people had called. Then I realised it was such a tragedy. I used to live very close to Uphaar at that time. It was something that I will never ever forget, for all the wrong reasons.

Where do you see the next 20 years heading in Hindi cinema? What is your hope for it?

I am an incurable optimist. That’s the only reason why I do what I do and have done for the longest time because when I sink into my corner and say, ‘Oh my God, is this what I want to do with my life?’ after I’ve seen a particularly terrible film.

Then I wake up the next morning and go into a theatre, and the next film, with my mind as a tabula rasa, like a blank slate. It’s a professional thing you do, you learn, you train your brain that way. That’s why I don’t watch trailers, because the film then gets old in my head. And it’s not very easy to do that. Because it’s everywhere, you turn on the television, there will be a song or a snippet or [an interview] or they’re on some comedy show promoting it up. It’s relentless.

See, a film industry like Bollywood, like Hollywood, like all industries are always trying to maximise the bottom line without really thinking of content, or shifting radically in any one direction because what’s worked before will clearly work [again]. The hope is that it will work again. The industry is a deeply risk-averse place. To do something totally different is a hugely risky enterprise and many people are not interested, particularly the big studios and the big stars with the big money behind them are petrified of not finding that tipping point, enough bums on the seat.

When a particular kind of filmmaking doesn’t know where the money is going to come from, there are massive insecurities all across the board — production, distribution, exhibition. My hope and my conviction is that there will be many more avenues for all kinds of films being put out there. I do believe that yes, the Netflixs and the Amazon Primes and the iTunes will drive some change. But at the same time I do also believe that theatres will always continue to exist, because the communal experience of watching movies is never going to go anywhere. I do believe at some stage the thousand-seaters will come back. There is nothing to beat that kind of watching. That’s why we ‘go’ to the movies.

Rocket Singh: Salesman of the Year