From fearsome villain to crazy comic character, the accomplished actor played them all.

Among the Amrish Puris, Om Puris and Naseeruddin Shahs was another artist with similar level of talent who didn’t quite get the fame he deserved. Throughout his career, Sadashiv Amrapurkar displayed his versatility, both in Hindi and Marathi cinema. Born Ganesh Narwode in Ahmednagar in Maharashtra, Amrapurkar was passionate about acting from his school days. After making his debut in the Marathi movie 22 June 1897 (1979), he went on to act in more than 200 films.

On his 67th birth anniversary, here’s revisiting some of his notable acts.

If one tries to think of the most dangerous villains in Hindi cinema, two names that instantly pop up are Gabbar Singh of Sholay (1975) and Mogambo of Mr India (1987). But if you look at Rama Shetty of Ardh Satya (1983), you might realize that he is no less menacing in his quiet, slimy manner. And Sadashiv Amrapurkar managed to achieve such a result in his Hindi debut itself. In fact, it is difficult to believe that this is his first villainous act. He appears like a pro when, while trying to convince Om Puri’s character sub-inspector Anant Velankar, he changes subtly from being polite to threatening.

This might well have been Sadashiv Amrapurkar’s most challenging role. Not because he had to play the head of a brothel, but because he had to play a transgendered brothel keeper. It would be an understatement to say that Amrapurkar got into the skin of the character. He was outstanding. To put it simply, it is difficult to believe that he is not a transgendered madam of the brothel. One can literally feel the fear he evokes when 'she' gets angry.

Sadashiv Amrapurkar also had impressive comic timing, which was visible in some of his films. One prominent comic role was in David Dhawan’s Coolie No 1, which starred Govinda. Amrapurkar’s character name, Shaadiram Gharjode, spoke all about his profession in the film: matchmaker. He teams up with Govinda to teach Kader Khan a lesson. To do so, Amrapurkar impersonates a rich businessman. In other words, he plays two distinct characters with ease.

Vaastupurush saw Sadashiv Amrapurkar play a freedom fighter but with a twist. He is not shown fighting for independence because the story is set in free India. Rather, he is an idealist who does not believe in using his freedom fighter card to get benefits for his son. He appears solid and firm despite speaking softly. One line of dialogue in the film defines his character perfectly: Rashtrabhakti chi kimmat vasool karu ka [Should I put a price on my nationalism]? 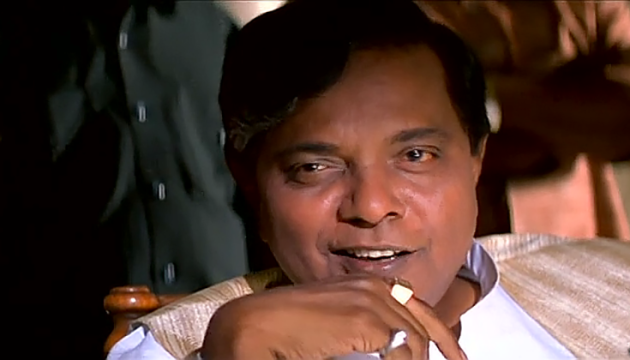 Savarkhed – Ek Gaon is one of the few Marathi films that Amrapurkar did in the last 10-12 years of his career. As the title suggests, the film is about a village called Savarkhed. The government has declared it an 'ideal' village. But conflict between agriculture and industrialization emerges in the village. Amrapurkar played Patil, a legislator. Despite the plethora of actors in the film, he was able to create an identity for his character through his performance.

Bombay Talkies was a film comprising four short films. One of the four films called Star was directed by Dibakar Banerjee. It had Nawazuddin Siddiqui playing the lead. But the film had a four-minute appearance by Sadashiv Amrapurkar. It is a classic example of a character of a theatre veteran so well written that it turns out to be memorable despite the limited screen time. But making it memorable was Amrapurkar. This act can easily be called one of his best. The manner in which he taunts his student (Siddiqui) will delight you no end.

Director Wasim Maner’s Hou De Jarasa Ushir was one of Sadashiv Amrapurkar’s last few releases. He played a free-spirited fakir. The film is about a group of office-goers who, while going to an important meeting, land up at a remote village. They meet the irritating fakir there. But in the end, he becomes their guide and helps them to understand the meaning of life. Amrapurkar not only gave a fine performance, but also carried the film on his shoulders.