A composer, innovator, and an actor, Pankaj Mullick was treading thin ice when he dared to set Rabindranath Tagore's poems to music. While his own Bengali family was horrified, the composer found support in one unlikely man, Tagore himself. On the 112th birth anniversary of the composer (10 May, 1905), we travel back in time to look at how he became the first composer to set Tagore's poems to music.

There are few things as precious to a Bengali as his collection of Rabindra Sangeet. The beautiful compositions of poetry, set to tune by Rabindranath Tagore himself, are considered a heritage of the culture and traditions of the Bengali heartland. Intellectuals from 'Bhadralok' were so sensitive about these songs that they could not bear to hear anyone else daring to compose them to music. It was for this very reason that these beautiful poems were restricted to remaining within the controls of the elite of Bengal. One man, however, wished to break these conventions. 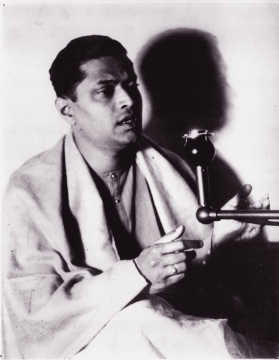 Pankaj Kumar Mullick was born in 1905 to an aristocratic household in Bengal. A creative innovator, musician, and actor, he soon found his niche on the radio airwaves. It was his early introduction to the illustrious Tagore family of Bengal that influenced his life's work. He learnt music under the grandson of Rabindranath Tagore's eldest brother, Dinendranath Tagore. The enormity of his contribution to Rabindra Sangeet can only be understood by comparing it to the fact that Tagore's poems and songs were almost holy to the Bengali intellectual. To have anyone, even the most illustrious musician, contrive to set those words to music was considered blasphemy. These compositions and poems possess an internal rhythm that is often unique, and untranslatable for someone who does not understand the culture of Bengal.

In his introduction to 'Geetanjali', the poet WB Yeats writes, ' Rabindranath Tagore, like Chaucer's forerunners, writes music for his words, and one understands at every moment that he is so abundant, so spontaneous, so daring in his passion, so full of surprise, because he is doing something which has never seemed strange, unnatural, or in need of defence.' But for someone other than 'Gurudev' to compose the tunes would require them to naturalise the tunes first. Pankaj Mullick, a lifelong follower of Rabindra Sangeet and its poetry was just the person to do it.

Mullick's close relations with the family and his own interest in Tagore's poetry led to the inevitable conclusion for Mullick. The story goes that having heard him hum one of Rabindranath's poems, a friend took him to the family. The great poet himself heard the young man sing. So pleased was the Gurudev with his voice, that he granted him freedom to compose tunes for the other poems that he hadn't set to music himself. In a personal meeting with the composer, the poet told him 'All those lyrics of mine that I will not get an opportunity to set tune to during my lifetime, I leave to you to embellish them with your music.' It was an extraordinary honour. The composer ventured even further by inviting KL Saigal, a non-Bengali, to sing Rabindra Sangeet.

The extent of Mullick's contribution to Bengali culture can be determined by his work with Sheikh Mujib. The man who led the struggle for Bangladesh approached the composer to create an album of Bengali folk songs to inspire and further the use of Bengali language and culture in 1953. Other than being a composer of enormous talents, Pankaj Mullick was also an innovator. His one eternal contribution to Indian cinema remains the idea of playback singing.

As an actor, Mullick had already made a mark on screen in films like Mukti(1937), Dhartimata(1938) and Kapal Kundala (1939). But it was music that always held his focus. It was his 'Piya milan ko jaana' in  Kapal Kundala that had the great Ustad Bade Ghulam Ali Khan in throes. At a performance where Pankaj Mullick was to share the stage with the great Ustad Bade Ghulam Ali Khan, the Ustad walked down the stage to greet the composer and congratulate him for his modulations on that particular number.

As a composer, Pankaj Mullick's career spanned across the boundaries of radio, cinema, and classical music. His contribution to radio programmes through the annual broadcast of 'Mahishasuramardini', a radio play on the goddess Durga, during the Bengali festival of Durga Puja, remains legendary. His film songs like 'So ja rajkumari' and Nuktacheen hai gham e dil' continue to be hummed by generations that have forgotten his name.

But for the composer himself, it was his compositions of Rabindra Sangeet that gave him the greatest joy. As Mullick would say, "Rabindra Sangeet is my life. Therein lies my redemption. It is not just music but something more. I can’t speak for others, but Rabindra sangeet transports me away from this world, far away, farther than even the sun and the stars."

There could not be a greater compliment to Gurudev, nor a greater tribute to the composer that his compositions for Rabindra Sangeet remain immortalised across households in Bengal.