Still hurt from Kaabil's run at the box office, even as Khan's Raees did better, Gupta took an indirect dig at Khan.

Picture: Shutterbugs Images
give your opinion

Filmmaker Sanjay Gupta’s Hrithik Roshan-starrer Kaabil clashed with Shah Rukh Khan’s Raees in January. Although Kaabil received positive word-of-mouth, Khan's film earned more at the box office. It seems Gupta is still hurt by this fact. He took a dig at Khan after knowing that his The Ring would be clashing with Akshay Kumar’s Toilet – Ek Prem Katha on 11 August.

Gupta wrote on Twitter, “KARMA, you beauty! I love and believe in you so much. I love how you go after all that f*** with you. KARTAM BHUKTAM on Independence Day.”

It was clear from his message that he is delighted to see that Shah Rukh's next with Imtiaz Ali (tentatively titled The Ring first and later Rehnuma) would be clashing with Kumar's film. The mention of Independence Day made it more obvious. The makers of Toilet recently postponed the release of the film, which was earlier supposed to release on 2 June.

As Kumar is having a golden run at the box office, he is expected to make it difficult for Khan's film.

Twitter users easily guessed the meaning behind Gupta’s tweet. Khan’s followers started attacking Gupta on the social media site. After it became too much, Gupta deleted the tweet. However, a lot of Twitter users had already taken a screenshot of his tweet.

This wasn’t the end, though. It seems that the Kaabil director later took an indirect dig at those who trolled him by tweeting, “ONLINE PROPAGANDA & ORGANISED TROLLING superbly shown & explained in HOMELAND Season 6.We are not headed there but are already there.” 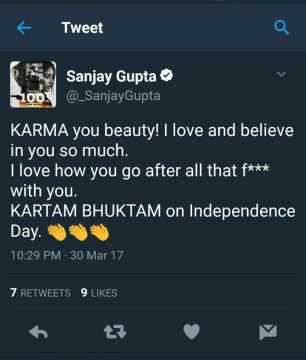