The years of suffering and loneliness had equipped Meena Kumari with the pathos that enriched something other than her acting. They ripened her poetry; a skill she used for her own comfort. On her 45th death anniversary today (31 March), we take a look at the hidden poetess within the talented actress.

Few actors manage to achieve control over the language which dictates their careers. Ajit, for all his silent terror, was known for hosting mushairas and poetry conventions. Balraj Sahni polished his acting skills while working as a dialogue/story writer. In both cases, they turned to the language as a career choice or entertainment. Meena Kumari turned to poetry for solace. It was surprisingly the same for Meena Kumari. 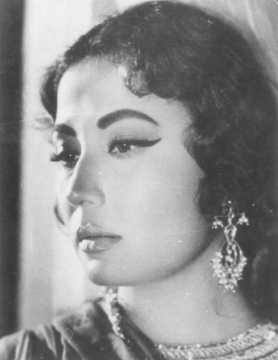 Meena Kumari's life had been a slow journey towards deterioration. It was during the filming of her last film, Pakeezah (1972) that rumours of her fatal sickness began to emerge. She never survived to witness the euphoria with which the film was welcomed. It is still considered one of the finest paeans to the 'Queen of Tragedy'. Yet, there was something far brighter behind those alluring eyes.

(For God's sake, do not distract me from my sorrows
Let them be, for they are my own.)

Meena Kumari's turn to literature should not be surprising, considering her pedigree. Her father was a veteran of Parsi theatre and well versed in Urdu poetry and literature. Her mother was a stage actress, who once performed Tagore's plays. Though she was never educated in the arts, Meena Kumari's sensibility and vocation endowed the actress with an innate understanding of poetry. It is a side of the actress that has remained hidden from most people.

In his book Meena Kumari:The Classic Biography, journalist Vinod Mehta explains her inclination to poetry saying 'Meena Kumari wrote because she had something to say and because she wanted to talk to herself.'

Her poetry also became her only mode of expression.

(They begin, but never end
Unless my stories have that name)

Meena Kumari, the poet, is not very different from Meena Kumari, the actress. Her poems contain an undertone of pathos that also shaded her acting style. 'The Queen of Tragedy' comes across as a self-aware, strong woman who understands the cracks in her own personality. Her lines are haunting, precise and convey a clear understanding of imagery and rhythm.

Gulzar, who was one of her closest friends in the industry, once remarked that the actress's sense of imagery is 'very strong and vivid'. The despairing verses and their origins in her own tragic life draw a direct comparison to another female poet from across the Atlantic, Sylvia Plath. Like Plath, it was love that Meena Kumari sought. It was love that drove her to despair.

After the actress' death in 1972, Gulzar had some of her poems published in a paperback, 'Meena Kumari Ki Shayari'. He believed them to be her finest works. Not many shared the opinion, though. KA Abbas thought she was 'not a very good or deep poet'. Sadly, the man who claimed her to be his muse, Kamal Amrohi considered her completely ignorant of the nuances of Urdu poetry.

In Professor Noorul Hasan's Meena Kumari The Poet - A Life Beyond Cinema, the introduction, by historian-critic Philip Bounds and researcher Daisy Hasan, describes her poetry as 'the medium through which Meena Kumari distanced herself from her public image and criticised the industry that had brought her to public attention in the first place.' The book carries complete translations of the actress's poems curated from her personal memoirs.

For an individual who was hardly schooled, and working in an industry that is known for superficiality, Meena Kumari displays outstanding depth of understanding and philosophical introspection. Yet, it is not completely cerebral and clever. It is based on very deep personal experiences. As Mehta points out in his book 'Her poetry is sad, joyless, pessimistic, morbid — but then what do you expect from a woman of the temperament of Meena Kumari?'

(There are two words that meet you at every turn
Call it death, if you cannot call it love).

It was during the making of Pakeezah that Meena Kumari approached composer Khayyam's wife, Jagjit Kaur, to compose for her ghazals. As fate would have it, it was Meena Kumari herself who sang those lines when the recording day arrived. In a lilting, rapturous voice, the actress rendered some of the most soul-stirring lines of her poetry. It was one hell of a way to sign off.