The first lady of Indian cinema, pioneering actress and producer was instrumental in shaping the Naya Daur actor’s early career. On her 109th birth anniversary, we look at how Devika Rani made a quick decision to launch Dilip Kumar through Bombay Talkies.

When Dilip Kumar aka Yusuf Khan first arrived from Poona in Bombay looking for a job, he met Dr Masani at Churchgate station. The psychologist knew Khan from a lecture he had delivered at Wilson College where the young man had been a student. Dr Masani, who was headed to Malad’s sprawling studio, Bombay Talkies, asked him to come along as he had an appointment with the studio head, Devika Rani.

It was Yusuf Khan's first visit to a film studio and the meeting with Devika Rani changed his life completely. Devika Rani asked if he knew Urdu; Khan did, as he was born and brought up in Peshawar in the North West Frontier Province. Devika Rani then offered him an opportunity to become an actor with the studio for a princely monthly salary of Rs1,250. She was able to gauge his potential in one meeting.

Director Amiya Chakrabarty, who would direct Khan in his first film Jwar Bhata (1944), was present during the meeting. Khan was credited as 'Dileep Kumar' in the film.

When he offered a few protestations, Devika Rani told him, “You can surely take pains to learn the craft of filmmaking and acting. I need a young, good-looking, educated actor and I can see that you possess the qualifications to become a good actor.” Dilip Kumar recalled this advice in his autobiography, Dilip Kumar: The Substance and the Shadow.

After some hesitation, Dilip Kumar went back to Bombay Talkies to accept the offer and meet with Devika Rani and sign a contract with the studio. He began to visit the studio every day, meeting contemporaries who would shape his films from Ashok Kumar to Raj Kapoor, a family friend.

For two months, Dilip Kumar watched how films were made; he was present during the making of Gyan Mukherjee’s Kismet (1943), the studio’s blockbuster film starring Ashok Kumar.

Bombay Talkies was split into two camps when Dilip Kumar joined them. After the death of co-founder Himanshu Rai in 1940, there were two factions in the studio — Rai’s widow Devika Rani and filmmaker Chakrabarty on one side, and actor Ashok Kumar and producer Sashadhar Mukherjee on the other. Devika Rani would soon retire from the film business altogether and give it all up to marry Russian painter Svetoslav Roerich.

But before Devika Rani left, she guided the young newcomer to his launch. It was her suggestion that Yusuf Khan be renamed as Dilip Kumar to suit his romantic image on screen. While Dilip Kumar was unsure about the name change, Mukherjee (also Ashok Kumar’s brother-in-law) also assured him it was a wise decision. He later came on board with his new name. 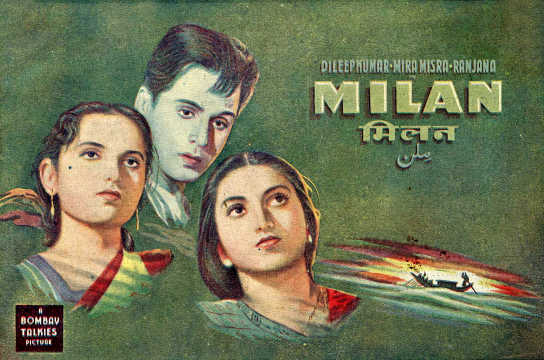 Dilip Kumar wrote in his autobiography, “I must confess that the new identity as Dilip Kumar had a liberating impact on me. I told myself Yusuf had no need to see or study films, but Dilip surely needed to accumulate observations of how actors reproduced the emotions, speech and behaviour of fictitious characters in front of a camera.”

Besides grooming him for a career in front of the camera, Devika Rani also helped shape Dilip Kumar's acting and performances, encouraging him to watch Hollywood and foreign films and look for inspiration within himself to improve with each film that he did.