A transistor radio, a tin, a gun – Babumoshai Bandookbaaz poster is brilliant


Nawazuddin Siddiqui will be seen as a rural contract killer in this light-hearted thriller by Kushan Nandy.

Nawazuddin Siddqiui never ceases to surprise you with his films. The actor is set to play a rural contract killer in his next film, Babumoshai Bandookbaaz. An intriguing title indeed, especially for a rural character. The Bengali word 'babumoshai' is used to give respect to an established gentleman. The makers today unveiled the first poster of the film and it leaves you speechless.

Here’s Babu (Siddiqui), fondly referred as Babumoshai Bandookbaaz showing his back – may be deemed unpleasant by some. Babumoshai appears to be scratching his bottom. He has a pistol tucked in his lungi, a transistor radio on his shoulder, and a tin in his right hand. We can’t say with certainty but this intriguing poster suggests that Babumoshai Bandookbaaz might be on his way to answer nature’s call. We leave it upon the readers to draw their own interpretations. The poster is definitely interesting and refreshing.

The last time an actor famously carried a transistor radio was when a naked Aamir Khan tried to hide his modesty in PK. 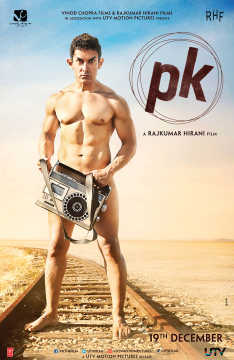 The film is directed by Pritish Nandy’s son Kushan, who has earlier made films like 88 Antop Hill (2003) and Hum Dum (2005).  The release date is yet to be announced.