Suraj Sharma: I need to learn a little bit more about life


As the Life of Pi actor turns 24 today (21 March), he is gearing up for his Hindi film, Phillauri and is ready to graduate from New York University. Sharma spoke exclusively to Cinestaan.com about his upcoming films and who he would like to work with.

Suraj Sharma was cast in Ang Lee’s Oscar-winning Life of Pi (2012) after the studio and director saw around 3,000 boys for the role of Piscine ‘Pi’ Patel. The film brought him global fame and roles in Disney’s Million Dollar Arm (2014) and Showtime’s television series Homeland. Next, he will graduate from New York University’s Tisch School of the Arts from the filmmaking programme in a couple of months. But before that, he will be seen in actress-producer Anushka Sharma’s Phillauri (2017) as Karan, a young man who accidentally gets married to a tree ghost.

When asked about his priorities after graduation, Suraj told Cinestaan.com, “I’m focusing on acting primarily. I’m pretty interested in writing and directing at a certain level, but I don’t really think I’ve reached a point where I should be getting into that. I’m going to wait. Thoda experience mil jaye life ka, learn a little bit more about life.”

Suraj loves the learning aspect of college life but feels he will continue with workshops, especially for acting with the right people to try and understand the craft more. He says he needs “more skills in my arsenal”.

As for choosing his first Hindi film, it was the script that drew him to Phillauri. “Pretty much every time, it’s always about the script, the character and the people who are working on the film. [The producers] sent me the script. So I thought, wow, this is beautiful, I really want to do this. Obviously, they didn’t know if I really wanted to do a Bollywood [film]. Actually they didn’t even know if I knew Hindi. So I called them up, ‘Sir, I really love the script, mujhe audition karne dijiye [let me audition].’ So Karnesh sir, the producer, Anushka’s brother, he said, ‘Please come.’ I came to Bombay, we did a taping and it worked really well.”

Most of the scripts offered to Suraj are serious fare and it was the lightness of his role that appealed to him. “The script is fun and comedy, and at the same time, it makes sense. It gives you something to do think about. My character is in such a strange, odd situation. He’s super scared, he’s getting married, and gets married to a tree and there’s a ghost all over him. So all these things made it super interesting. It’s different and comedic, I had never done comedy before,” he shared.

He doesn’t think he’s good at comedy yet but the challenge of exploring the genre made him want to try it out more. He stated, “I want to try out some other stuff like some extreme drama or some sort of a thriller. I want to try new things basically so that I can learn.”

His dream director to work with would be Wong Kar-Wai “if that works out.” He seemed charged at the possibility of it. "Working with him would be amazing. Over here, I’d like to work with Abhishek Chaubey, Imtiaz Ali, or Anurag Kashyap. Basically, everybody’s on my wishlist, as long as it’s a good script,” he added. 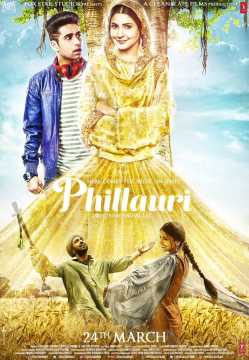 Since Phillauri is the only Hindi film he’s worked on, Suraj feels he can’t really compare Hollywood with the film industry here but he felt a certain shift in the performance here. “You have to emote more for the audience. You’ve got to find a place where you both connect realistically with the audience and at the same time, you’re a little larger than life. You make it bigger than what it really might be so understanding that was difficult but now that I’m trying to, it’s fun,” he said.

His graduation from university frees him up to pursue more roles. Suraj has been more than grateful for the career he has had so far.  “It’s been more than I could have asked for. All of this was shot in my holidays, every time. College slowed me down but somehow it still worked out so I’m pretty glad about that,” he said.

Besides Phillauri, Suraj will next be seen in The Hungry, a modern take on William Shakespeare’s Titus Andronicus and Burn Your Maps with Vera Farmiga and Jacob Tremblay. Both films are due to be released this year. As he heads back to reading scripts and auditioning, Suraj said he is open to anything. “I would do a web series or anything as long as the script is good and [it] seems interesting, different, new, and challenging,” he finished.

Phillauri, with Anushka, Diljit Dosanjh and Mehreen Pirzada, will hit the theatres on 24 March.