The actor was in the state for the song launch of Imtiaz Ali's film, Jab Harry Met Sejal, on Wednesday.

While he met with 7,000 Sejals in Ahmedabad on Wednesday, Shah Rukh Khan also dropped by chief minister Vijay Rupani's residence.

The actor, who was in the city for the promotions of Imtiaz Ali's Jab Harry Met Sejal, spent some time with the CM Rupani at his residence in Gandhinagar. There is no information on what the point of discussion was, but this is not the first time Shah Rukh has visited the state during a film promotion. The actor had made a  visit to Ahmedabad during the promotions of Raees (2017) earlier this year.

Thk u hon’ble CM @vijayrupanibjp for regaling us with ur stories of the past struggles & vision of ur future dreams pic.twitter.com/ucleDIWXKK

Khan was accompanied by director Imtiaz Ali. The duo launched the first song of the film, 'Bani Main Teri Radha'. While there were 7,000 Sejals, the main 'Sejal' of the film, Anushka Sharma, was absent. 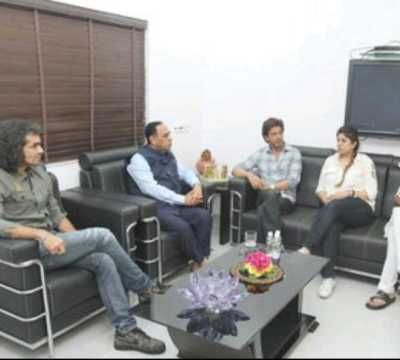 Speaking about the film to IANS news agency, Shah Rukh said, "The film travels a lot… But it is not on travel. It’s a tourist guide, but it’s a love story… Two people meet somehow, and somewhere down the line as they are moving around, they kind of fall in love."

Jab Harry Met Sejal is a romantic comedy, which is scheduled to be released in theatres on 4 August.