This brilliant and incisive film was Banerjee's first and marked the rise of directors from a more brazen middle class. On the filmmaker's 48th birthday, we revisit the film that defined the middle-class dream.

The 1970s, known for the potboilers of Manmohan Desai, Prakash Mehra and Ramesh Sippy, was also the era of 'middle-of-the-road' cinema by the likes of Basu Chatterji, Gulzar, and Hrishikesh Mukherjee. Their films spoke of the hypocrisies, fallibilities, familiarity, and ideals of the Indian middle class.

It took another three decades for Hindi cinema to rediscover the joy of telling these simple stories. Dibakar Banerjee's debut film, Khosla Ka Ghosla! (2006), was the culmination of the rise of a new, more brazen middle class that had come to rule India in the new millennium. 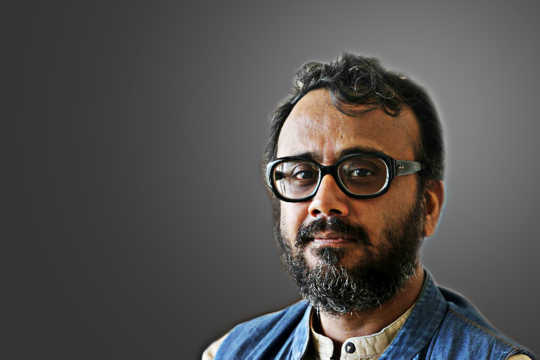 The director, who sharpened his skills in the world of advertising, made his debut with an incisive, satirical and comic tale on the greatest dream of the Indian middle class — buying a home. Over the past 10 years, Banerjee has emerged as a daring filmmaker willing to push boundaries with experimental (LSD: Love Sex Aur Dhokha, 2010), satirical (Shanghai, 2012) and noir (Detective Byomkesh Bakshy! 2015) subjects. 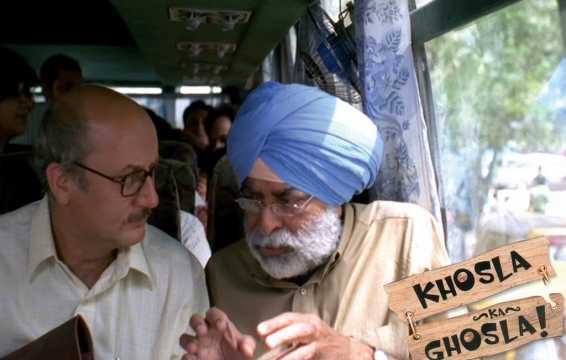 What separates Khosla Ka Ghosla! from Banerjee's other works as also from other films released that year was its milieu. The film delved into the heart of the Delhi middle-class family looking to buy its first house. It is a sentiment that echoes across the country from NOIDA to Nellore. Filled with some familiar tropes, like the dutiful son wanting to go abroad, the traditional father who is struggling with retirement, or the useless younger brother who actually saves the day, the film is a testament to the director's experiences while growing up in Delhi's Karol Bagh.

Khosla Ka Ghosla! is a veritable nest of memorable characters. Starting from the protagonist Kamal Kishore Khosla (Anupam Kher), the rajma-eating, straight-arrow father, to Asif Iqbal (Vinay Pathak) to Kishan Khurana (Boman Irani), the slimy, menacing real-estate shark, the film is coloured with personalities. Even the supporting cast, like the friendly Sardarji offering personal and financial advice in the park, or the Rooh Afza-serving mother, are real portraits. 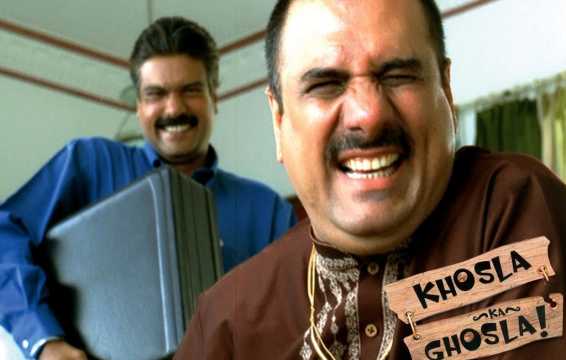 On the 10th anniversary of the film, writer Jaideep Sahni told the website www.filmcompanion.in, "The soul and spirit of KKG draws from both, Dibakar’s and my experience of growing up in middle-class Delhi. Initially, Savita [Savita Raj Hiremath, producer] and I began by wanting to do something around the generation gap. Then, it evolved into a father-and-son story and the rest."

The film also created the Delhi middle-class canvas, one that Banerjee used more efficiently in his next, Oye Lucky! Lucky Oye! (2008). The scene in which Chiraunji 'Chiku' Khosla tries to explain to his angry father why he wants to leave the country, or the one in which his mother defends him, are scenes that occur in every household. The walls painted with 'Yahan peshaab karna mana hai' (Don't urinate here) are perhaps the most memorable part of a middle-class housing colony.

A strong point in any cult film like Khosla Ka Ghosla! is the dialogues. Jaideep Sahni's script contains many memorable scenes that mark the film out as a cult classic. One that stays in the mind is that of Chiraunjilal (Parvin Dabas) sharing a drink with his father for the first time. Though the audience, and perhaps even the father, knows that Chiraunji is no amateur at drinking, the father goes through the ritual of telling him to 'hold the drink'.

Another fantastic sequence is when Navin Nischol's confident actor playing a millionaire shuts up an over-friendly broker by asking, 'Aap chup rehne ka kya lenge? [What would you charge to shut up?]'

The USP of the dialogues also lies in the difficulty of translating them into any other culture. For instance, when Anupam Kher's rajma-eating Uncleji tries a pizza for the first time, he asks his flustered wife, 'Koi chutney wagairah hai kya? [Any condiment to go with this?]' Lines like these are what made Anupam Kher say at the interview, "Khosla Ka Ghosla! is and will always be Dibakar and Jaideep’s Saaransh." The reference was to Kher's own debut in Mahesh Bhatt's acclaimed film Saaransh (1984).

The film was an underdog tale throughout. With no item song, no love story, and no prominent box-office star, there were few producers betting on the film. The year 2006 saw the release of Dhoom 2, Rang De Basanti, and Lage Raho Munna Bhai. In keeping with its middle-class theme, Khosla Ka Ghosla! got decent appreciation and reward on the big screen, but only really succeeded on the small screen. At a later interview with the Film Companion website, the director admitted as much, saying the film's success was marked down entirely to "repeated runs on television and through home entertainment sales".

Banerjee went on to direct another cult middle-class black comedy, Oye Lucky! Lucky Oye! (2008). Like Khosla Ka Ghosla!, the film dealt with the unsettled middle class subverting the law to achieve its ambitions. It was a sign of the brazenness that first found expression in the subtle comedies of Hrishikesh Mukherjee and Basu Chatterji. Except, now there was no reason to be subtle.