Sexy Durga, Hotel Salvation, Newton among films to watch out for at the London Indian Film Festival


The lineup for the 8th London Indian Film Festival has some fantastic, and strong Indian films showing up.

The lineup for the 8th London Indian Film Festival has been announced, and is proof of a diverse, proactive culture of cinema emerging from the Indian subcontinent. Opening on 22 June, the festival will run for a whole week in London.

The Bagri Foundation London Indian Film Festival is considered to be one of the largest European Festival for Indian films. From premieres to critically acclaimed masterpieces, the festival is filled with some bright gems.

For cinephiles, there is much to rejoice. The festival will open with The Black Prince, and close with Sanal Sasidharan's IFFRA Tiger award winning, Sexy Durga. Amit Masurkar's Newton, Shubhashish Bhutiani's Hotel Salvation, and Haoban Paban Kumar's Lady Of The Lake are the other films listed in the programme.

The show stoppers might be Raj B Shetty's Ondu Motteya Kathe. Produced by the avant garde Kannada filmmaker, Pawan Kumar, the little comedy is making its international premiere at the festival. Another film making a premiere is the Marathi supernatural thriller, Lapachhapi.

Here's a list of films that Indian fans at the festival need to keep an eye out for. 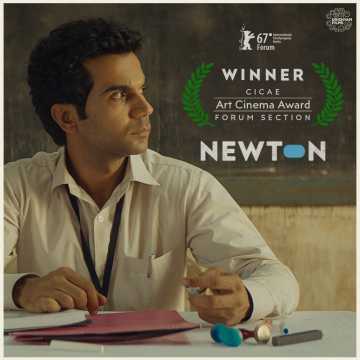 Rajkummar Rao's turn as the common electoral officer faced with the uncommon problem of a Maoist insurgency has earned critical acclaim across the world. The film premiered at the 67th Berlin International Film Festival in January and won the Art Cinema prize at the Berlinale Forum. It later went on to win the Jury prize for Best Film at the Hong Kong Film Festival.

The film is directed by Amit V Masurkar and stars Rao and Anjali Patil.

Shubhashish Bhutiani's film has been punching above its weight at film festivals across the world. The film released in September, and has already won the Special Mention Award at the 64th National Film Awards earlier this year. The film stars Adil Hussain, Lalit Behl, Palomi Ghosh and Geetanjali Kulkarni.

This is the dark horse of the festival. A brilliant, light hearted comedy, Ondu Motteya Kathe is a Kannada film that speaks about the struggles of a bald man in a society increasingly obsessed with beauty. The film was struggling to find any backers, till critically acclaimed Kannada director, Pawan Kumar, decided to back it. It is the first time the Lucia filmmaker has decided to back a film that has no contribution by him. This is proof enough of its potential. The film already had its international premiere at the New York Indian Film Festival earlier this year.

A horror film is a rare event in Marathi cinema, and one that is with such a heavy buzz is rarer still. The film is directed by noted television filmmaker, Vishal Furia, and stars Pooja Sawant, Usha Naik and Vikram Gaikwad.

The film is set for theatrical release in India on 17 July.

Written and directed by actor Raaghav Ranganathan, the film is a quirky comedy thriller that has an interesting cast and script going for it. Raaghav has been an actor, and was last seen in S Shanker's Enthiran (2010), and will be making his directorial debut with this film. The film does not have a release date as of today, but might soon find some backers with its performance at festivals.

Kavi Raz's film starring Satinder Sartaj tells the story of the last king of Punjab, Maharaja Duleep Singh and his lifelong struggle to return to the land of his birth. A tale of struggle, courage, and longing, the film does touch on some key emotional facets of a forgotten king. The film is set to release theatrically on 21 July.

Sanal Sasidharan's rebelliously titled film is a fast paced taut thriller with a twist to the tale. The film has already wowed critics and filmmakers alike, and won the Tiger Competition at the International Film Festival Rotterdam in January. It will be the closing film of the London Indian Film Festival.

The festival also has a very vibrant list of short films competing for the Satyajit Ray Short Film Competition. These include Samir Mehanovic's short feature on the coal mines in Jharia, Mouth of Hell, and the award-winning Bengali short film, Moriom. The competition will also see the acclaimed LGBT love story, Sisak, by Faraz Arif Ansari, and Anay Tarnekar's The Kill, starring Radhika Apte and Girish Kulkarni.