On Father's Day, we take a look at some of the iconic and intriguing father-child relationship stories in Hindi cinema.

Indian society takes pride in familial ties and values. The patriarch of a family is a much revered figure, sometimes gaining divine status. Paternal characters in Indian cinema have often been projected in cliched roles. A Bollywood father is often seen opposing his child's choice of lover. However, Hindi cinema has to its credit quite a few stories that have explored the father-child relationship in different ways.

As the world celebrates Father’s Day today (18 June), we take a look at some of the iconic and intriguing father-child relationship stories in Hindi cinema. 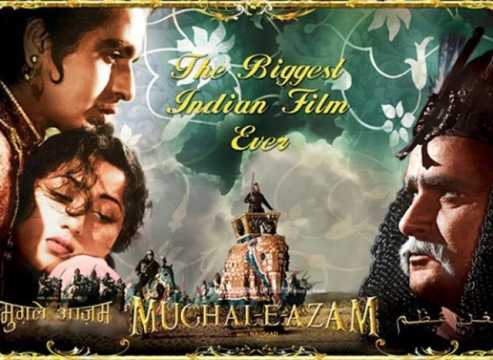 Stuck between royal prestige and fatherhood, Akbar does what an emperor needs to. He deceives his son into believing that Anarkali has been terminated, whereas the truth is that he discreetly makes Anarkali leave the kingdom. A disheartened Salim then kills himself by consuming poison.

The son is kidnapped, but his father refuses to meet the demands of the criminals. Luck somehow brings the young boy, Vijay back to his parents, DCP Ashwini Kumar (Dilip Kumar) and Sheetal (Raakhee). Imagine the impact of this refusal by a father on the mind of a child. Amitabh Bachchan played the grown-up Vijay.

As fate would have it, Ashwini Kumar is the man who shoots his own son after he discovers that Vijay has become part of the same crime syndicate he (the father) was trying to bust. Dilip Kumar chooses duty over son again. Vijay joined hands with the bad guys only to eliminate JK Varma (Amrish Puri), the man who had kidnapped him as a child.

Ramesh Sippy's Shakti is regarded as one of Bachchan and Dilip Kumar’s finest performances. This was a fractious father-son equation that could never be repaired and both the actors displayed the requisite intensity to the T.

In the 1980s and 1990s often the character of the father was a clichéd one. They'd form part of the supporting cast, or be entrusted with the job of opposing a match. Dilwale Dulhania Le Jayenge threw new light on father-son and father-daughter relationships.

Baldev Singh Chaudhary (Amrish Puri) was the ideal, principled father who took utmost care to see that his daughters are not influenced by the western culture in the United Kingdom. He knows what is best for his daughters, and they are not supposed to question papa’s wisdom. Yet Simran (Kajol) defies tradition and falls in love with Raj Malhotra (Shah Rukh Khan).

As opposed to Baldev Singh, Dharamvir Malhotra (Anupam Kher) is more a like a friend to his son Raj. Dharamvir is a jovial man who is over the moon when he learns that his son Raj becomes the first in their family to earn a degree. He doesn't care that Raj has barely scraped through. He drinks with his son, wants him to enjoy his life, hang out with women. As a character, Dharamvir was alien to Hindi cinema. Every son wished he had a father like him.

Hazari Prasad (Kher) was a miserly scrap dealer, so miserly that he sucks a house fly as he doesn’t want to waste a drop of his tea in which the fly fell. The one thing he craves for is money. The only way to land the big bucks is by getting his son married to a wealthy man’s daughter.

Raja does him a favour as he falls in love with Madhu (Madhuri Dixit). However, Hazari Prasad is more interested in Madhu’s wealth. It’s impossible for Madhu’s father Mr. Mehra (Saeed Jaffrey) to let his daughter marry a scrap dealer’s son. So Hazari Prasad cons Mehra into believing that he’s richer than him. However, Raja doesn’t have whiff of his father’s shenanigans. Kher’s comical antics won him the Filfmare Best Supporting Actor award that year. 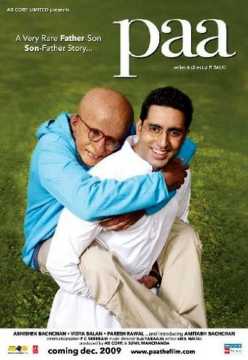 This is arguably, the most stunning father-son relationship story. One never seen before in Hindi cinema. Real father-son duo Amitabh Bachchan and son Abhishek did a role reversal in the reel word with the Abhishek playing father to Amitabh, who's suffering from a rare disorder, progeria.

R Balki’s Paa was widely appreciated for its heartfelt story and the stellar show by Amitabh that helped him bag the Filmfare Best Actor Award.  The film and Amitabh took the top honours at the National Awards too.

Amitabh Bachchan is quite envied by actors of his generation. At 74, he still continues to bag leading, pivotal roles. In 2015, Shoojit Sircar cast him as the short-tempered, outspoken, severely constipated Bengali Bhashkor Banerjee, who is left lonely after the death of his wife. His daughter Piku (Deepika Padukone) knows that despite her father’s many tantrums, she can’t afford to leave him alone.

The constant squabbles with her father makes Piku also quarrelsome. It was commendable that Piku was unmarried as she doesn’t want to leave her old man alone. Piku was a refreshing story backed by amiable performances by Padukone, Amitabh and Irrfan Khan.

He’s a legend of Malayalam film.  Hindi film audiences would relate to Mohanlal with Ram Gopal Varma’s Company (2002).  Mohanlal sure has many great Malayalam films to his credit, but his 2009 family thriller Drishyam received great acclaim across the country. The film was remade into Hindi with Ajay

Mohanlal is a legend for Malayalam film goers. Mohanlal has many great Malayalam films to his credit, but his 2009 family thriller Drishyam received great acclaim across the country. The film was remade into Hindi with Ajay Devgn playing Mohanlal's role, but nothing could beat the original.

George Kutty (Mohanlal) is a happy-go-lucky cable operator whose life revolves around his family and watching lots of films. Their lives take a turn for the worse when his wife Rani (Meena) accidentally kills Varun (Rohan Basheer), who films George's daughter Anju (Ansiba Hassan) bathing at a camp and blackmails the family. Though barely educated, George Kutty is gifted with a sharp mind. Inspired by various crime films, he uses his brains to save his family. Kutty showed that a father can go to any length to protect the honour of his family.

Good or bad, most fathers always have the best interest in mind for their child. Bollywood villains pampered their children, spoiling them. Yash Raj Films’ Aurangzeb shocked with the character of DCP Ravikant Phogat (played by Rishi Kapoor), a corrupt policeman who wouldn’t let anything come in the way of his nefarious ambitions.

Mughal emperor Aurangzeb had killed his elder brother to claim his father Shah Jahan’s throne. While the film was not about Aurangzeb’s life, Rishi Kapoor’s character kills his own son-in-law Vishnu (Sumeet Vyas) who gets a whiff of the illegal real estate business run by the his father-in-law and brother-in-law.

Udaan broke away from the cliched father figures seen in Hindi cinema. It protrayed domestic violence as a sad reality. First-time director Vikramaditya Motwane’s Udaan was a story of an abusive father and his two sons. Bhairav (Ronit Roy) is a former armyman who takes to alcohol after his wife’s death. His two sons – Rohan (Rajat Barmecha) and Arjun (Aayan Boradia) — bear the brunt of his frustrations. The performances by the three were outstanding and memorable. Roy, in particular, instilled a sense of fear among the audience with his intimidating ways.

Aamir Khan and his daughters in Dangal (2016) 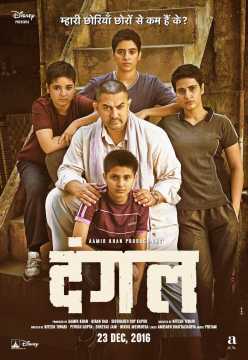 Aamir Khan’s Dangal brought a whole new dimension to the father-daughter relationships. Based on the life of wrestler Mahavir Singh Phogat and his daughters, the film revealed how tough a task master Phogat (played by Aamir Khan) was to his daughters Geeta and Babita.

Child actors Zaira Wasim and Suhani Bhatnagar played the young Geeta and Babita, while Fatima Sana Shaikh and Sanya Malhotra took off from where the child actors left. The scene where Aamir wrestles Geeta (Shaikh) sends shivers down your spine. When was the last time we saw a father wrestle his daughter in a Hindi film? More than the medals, Dangal scored for the unique relationship between Phogat and his daughters.

This family drama produced by TP Agarwal was a disaster. However, it did have a jaw dropping concept. Laali (Akshara Haasan) and Laddoo (Vivaan Shah) fall in love and the latter’s father, (played by Darshan Jariwala) approves of his son’s choice. Laali gets pregnant, but Laddoo asks her to abort the child for the sake of his career. Laali refuses, causing the couple to split.

Ashamed by the conduct of their son, Pramod (Jariwala) and his wife disown Laddoo and take Laali with them. Now, Laali has an alcoholic father in Ganpat (Saurabh Shukla) who wouldn’t accept Laali. The film then leads to a too-good-to-be-true sequence where Laali is adopted by Laddoo’s parents, while Laaddoo finds shelter in the home of Ganpat. Pramod wants Laali to marry and the girl finds a prince in Veer (Gurmeet Choudhary), whereas Ganpat is on the look out for a bride for the same man who impregnated his daughter. It’s hard to find characters like Pramod and Ganpat in real life. 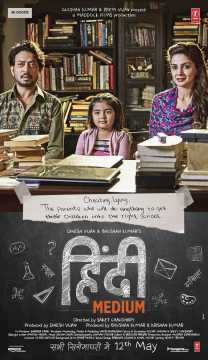 Saket Chaudhary’s Hindi Medium is one of the most appreciated films of 2017 so far. The family drama revolves around parents' fixation to get their daughter admitted to a top English school in New Delhi. Irrfan Khan plays both, the doting father and ideal husband, minus the melodrama that we associate with family dramas.

Raj Batra (Khan) goes to great lengths, even resorting to living in the slums to get his daughter admission in a desirable school. The light-hearted family drama-cum-satire addressed a grave issue in the most subtle way. Batra’s characters underline again how a doting father will move the world to secure the future of his child. Khan's performance is worth all the praise the film has received.